Especially for the ones for whom yarn bombing takes too much time (by the sizes needed), Mail Art is the way to go!
You can knit and send lighthouses, snowmen, envelopes, or simply knit.
You can weave or even crochet mail art cards (thank you again, Thom!).

While creating, suddenly this Snail Mail Snail shown above appeared.
Below there was a new snail-to-be born (temporary put on a public transport chair, here) but suddenly I decided to give the result to a little girl who was watching very interested and who might be our mail art colleague within 15 years or so :-) 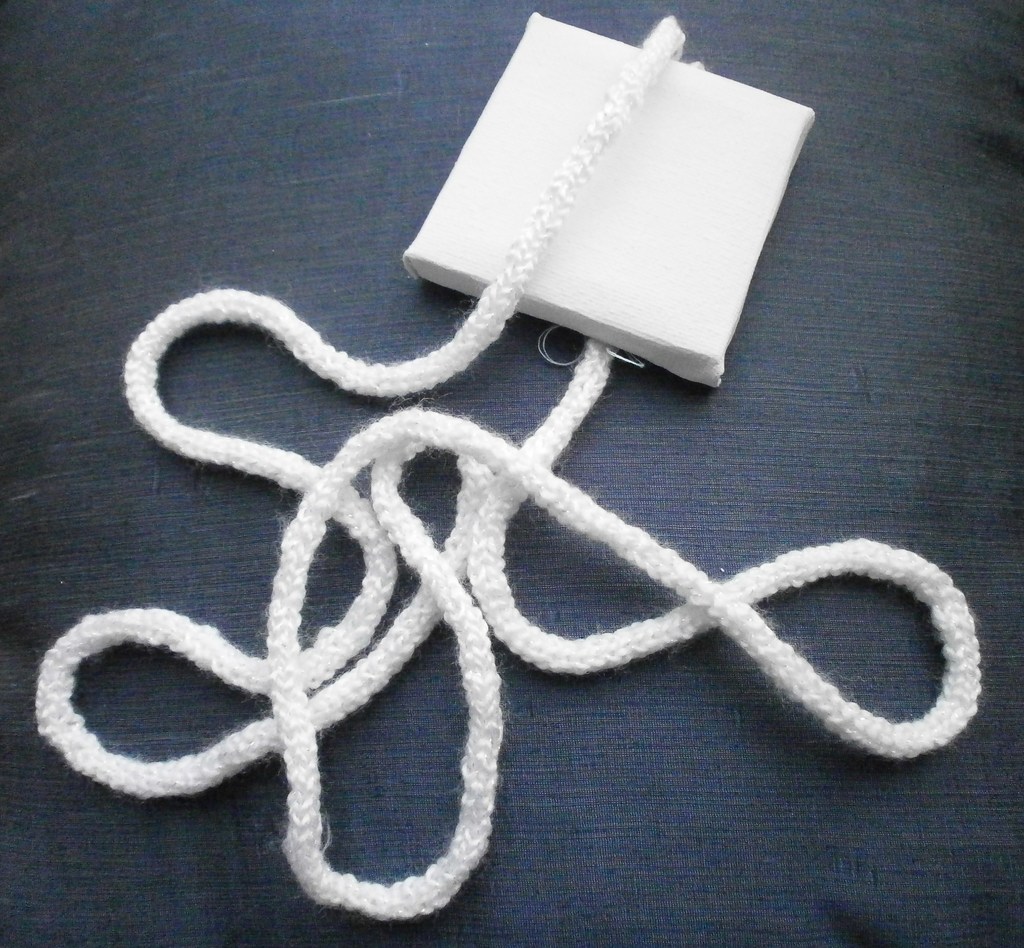 "No Rainbows without a Cloud". Punniked for Val.

How did i miss this blog, Heleen?

"KATerinetta"(...Κατερινέττa) that you are busy creating! wow!

Yes, somewhere in my messy studio, I have a spool for spool-knitting,

I'll have to hunt it up one day soon.

you did finish that Rubik cube knit ...Wow!

Fill it with some sponges cut into a cube?

This is a TALL tower of Rubik cubes, yes? hahaha! You could knit many...oh no!

Katerinetta, Katerina, how coincidental! Yes, indeed it's a great action to do under olive trees and sitting on couches (watching soccer matches) or on chairs in waiting rooms :-)
Do you have a spool knit spool?

Nice picture, and wow, that's a huge cube tower! Nice surroundings, too; who's that guy, who are all those people, none of them knitting nor crocheting?!?  :-)

Thank you for asking about the knit cube-to-be! I knit it for myself (or for the person who will offer a million of euros for it, if insisting), instead of for any men-in-my-life :-)

At the second cube match I finished the knitting and sewed almost all sides, except for the orange side you see here on top (by the way, the orange yarn is from same ball of yarn which I used for the orange punnikins I sent to you and Val, so the two of you will receive a piece of this cube-yarn, too)  (might be important information, in case the knit cube becomes a collector's item :-) . 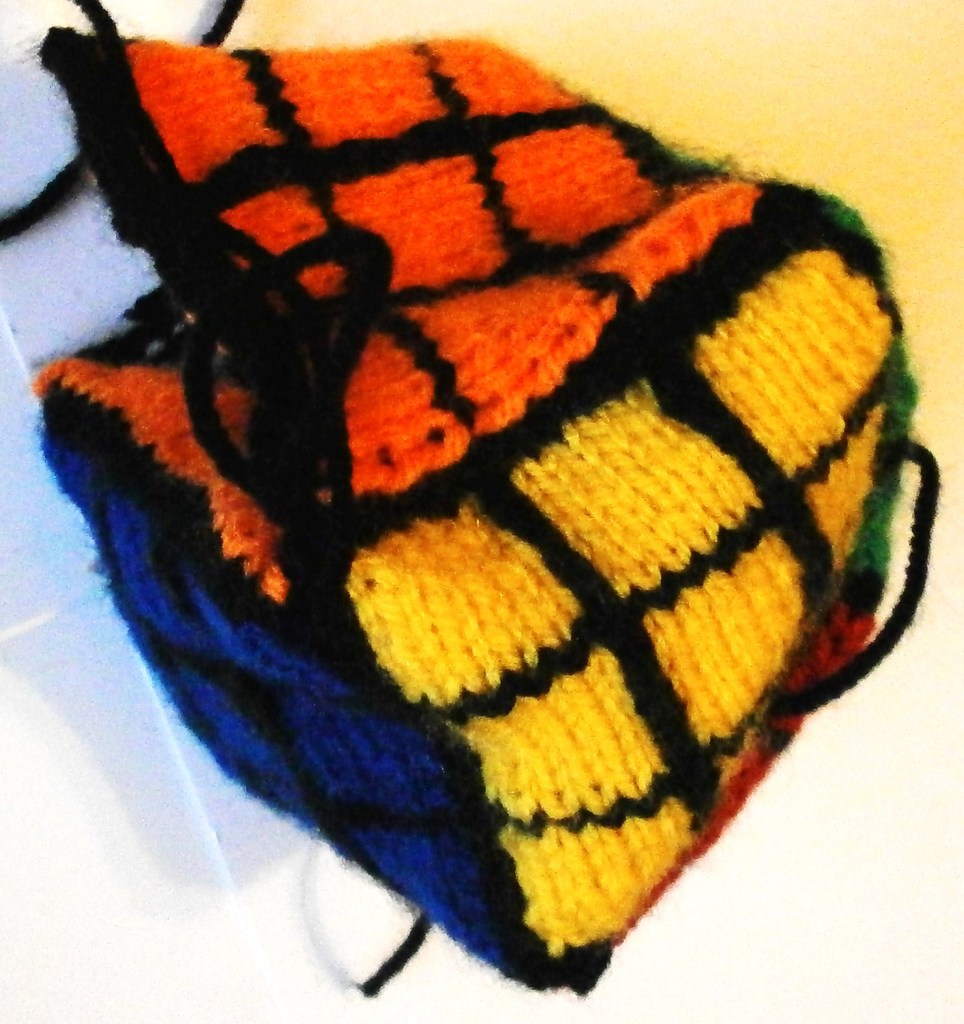 I just  have to find a way to fill the inside part, in order to make the cube a real cube instead of the ball it might look like now.
First I thought of putting a Real Cube inside, taken from the cubing family member, but that member was not amused by the idea to loose the cube into a knit art object and to be not able to turn the sides anymore. (even though this family member is specializing in 1000 pieces jigsaw puzzles since recently...) I am glad that we have 'de-sexed', 'un-sexed', or whatever punnikins. That makes life easier for us, and, of course, the punnikins.

Why didn't I buy lots of cheap t-shirts? I suppoose that at the time I was traumatised by England's early exit  and seeking psychological relief-- which means I was in the pub. I must admit though, that buying wool etc is so cheap here in France (€1/big ball of wool) that it hardly seems worthwhile to start recycling t-shirts etc

Thank you, Val. Don't worry about punnikin's sekse, punnikins are different to us and the whole mail/femail diffference is no issue for them.

With "it's/her" I meant both the punnikin and the accompanying lady, who helps the punnikin to travel and keeps an eye on it so that it won't be hurt or stolen.

Wow, why didn't you buy lots of t-shirts then? After giving many of them to people who are in need for cloths, you can cut the rest into slices, soit becomes thread, and then can use it to spool knit or knit or crochet.

Wow! I'm going to get an Oranje punnikin, thanks!

But I'm a little bit worried as to whether it will be a him or a her. I asked my Dr* friend, and she said "Lift up it's tail and then you can see what sex it is." So I will.

* My friend tells me she is a Dr in Astrophysics, not Punnikin Gender Determining**

** Are there Gay Lesbian Bi-  and Trans-sexual Punnikins? ("Ask your friend, Val.")

(I was in England for the 2006 World Cup in which the English team made their usual pathetic 1st round exit. On the first Saturday I was there, when they played (and lost) their opening match, World Cup t-shirts in the market were £10 each. On the 2nd Saturday, when England had got one point from two games and were effectively out of the Cup, they were £5 each. On the 3rd Saturday, when the team had already come back home, the price of t-shirts had fallen to £1 each or 3 for £2.

Now as this is supposed to be about 'Yay Yarn', I can suggest that you buy a big stock of England 2014 t-shirts very cheap, add red, white and blue punnikins -- of any gender you choose -- to them, and then sell them for an enormous profit! When you are very rich from this enterprise, do, please, remember whose idea it was. Bedankt)

Thank you, Val, for your kind words!
This other lovely punnikin (made already before yesterday evening) I put into the letterbox today before 6 pm, so it is on it's/her way to you :-) 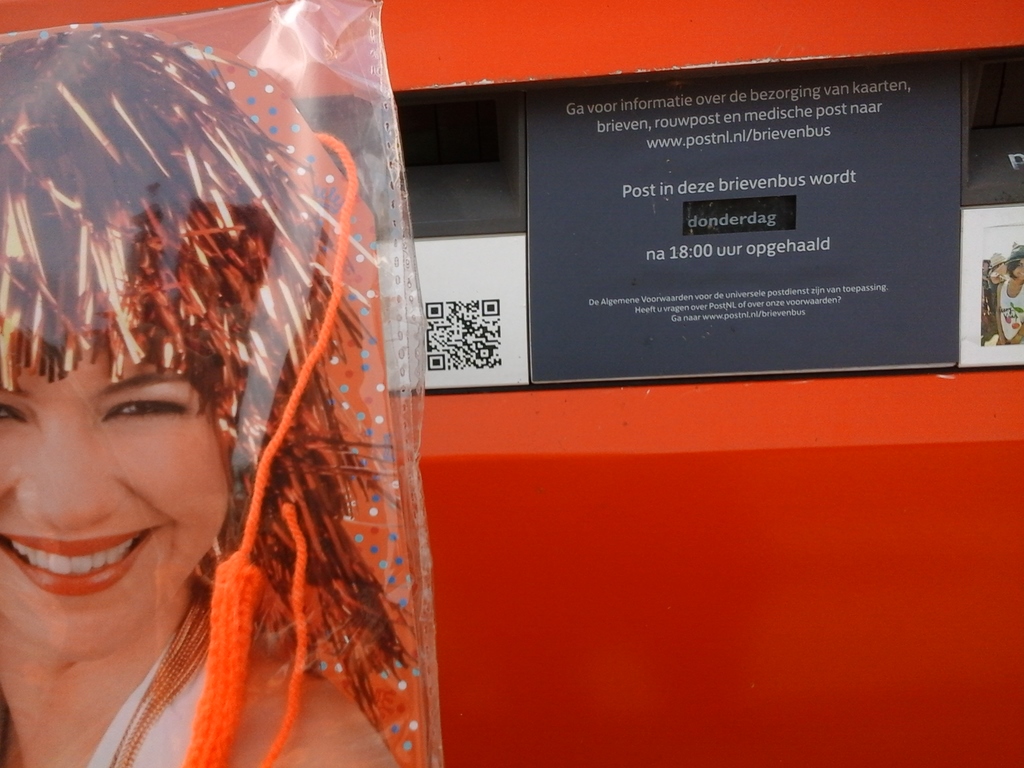 You wonder what the Dutch would do with all their orange stuff, what the merchants will do now? Well, they sold almost everything to me (already before yesterday evening) so I could send it into the world, to the 11 Orange Lovers :-)

(The merchandizing people were so clever to not print too many '2014' and country's names on the orange stuff, so the rest (which didn't fit in the letterbox anymore so I brought it back to them) they can use in 2016, 2018 and later years.)

I'm currently making a long one (+/-75 cms) for my rainbow set. About 50 cms got punniken-ed during the first 90 minutes of last night's match -- and then I went to bed, 'cos I never watch extra times (and penalties).

I guess the Big Orange Dream has faded...for another 2 years, and then it will start all over again. Thanks, Heleen. I can find a needle somewhere in the house -- if i) I can find the sewing box, which always goes missing, & ii) I can manage to thread the needle.

A Very Short Story: I once had a girlfriend who said she would do 'Anything, absolutely anything' for me. 'Will you sew and embroider my Levis?', I asked her. 'NO! Anything but that. Sew your own jeans.' So I found a girl who would. Perhaps that's why we split up....