I went home to see my mom (age 96) a few weeks ago and I noticed a Mockingbird singing away at the top of a telephone pole in front of her house. He sang for (what seemed) like five hours straight (with breaks for water and insects). I thought, “Now there’s a guy who likes the sound of his own voice.” Birders will interject, “but it’s not his voice. It’s a compendium of bird songs plus whatever other sounds he fancies.” True dat. But five hours! This is like Barbra Streisand singing for an entire week by which time even her hardiest fans are leaving the bleachers. Trust me, I am going somewhere with this. I think. Fast forward to Wednesday. I’m sitting at the therapist’s office and saying, “I was rude to three people in the past couple of days.” This bothers me because I’m supposed to be nice in my professional capacity. Not good to be rude to the customers. I’m thinking, “Is this the long-awaited personality change I’ve been expecting? Turning into Ebenezer?” We mulled that for a bit and then I talked about the mockingbird and his tremendous stamina, not to mention joy in his work and I might have said that I identified with the bird. Then, for some reason I started describing a card I’d made for Nancy Bell Scott in which a Beaver appeared somewhat unbidden. It was supposed to be a caption balloon but it looked more like a beaver so I went with it. And we then began comparing the beaver, all work and no play and the mockingbird, seemingly endless play and I mentioned that I was behind in my blogging and that it was hard to create when I owed so many people a thank you and an acknowledgment. So we’re setting up this dichotomy here between the beaver who needs to get those blogs out and the mockingbird who’s waiting to sing his song. What’s the problem with the beaver? He’s lazy. We have a lazy beaver here, my friends. And while the mockingbird is waiting in the wings, he’s getting testy, rude even. (You know, this whole essay was a lot more meaningful and poignant in my mind’s eye so you might want climb into my brain and observe the shadows on the wall which are ever so evocative, not to mention lucid as a shadow.) Anyway, the solution here is a collaboration between beaver and mockingbird. The beaver does his duty (not so onerous really) and the mockingbird eggs him on with jokes, patter and a few new things he’s picked up backstage. It’s interspecies vaudeville.

Speaking of Nancy Bell Scott, way back in April (April!) she sent me a mail art piece, two books of matches and a letter about dealing with Mr. Twig (see Nancy’s blog for explanation). That damn beaver sat on those matches for months! 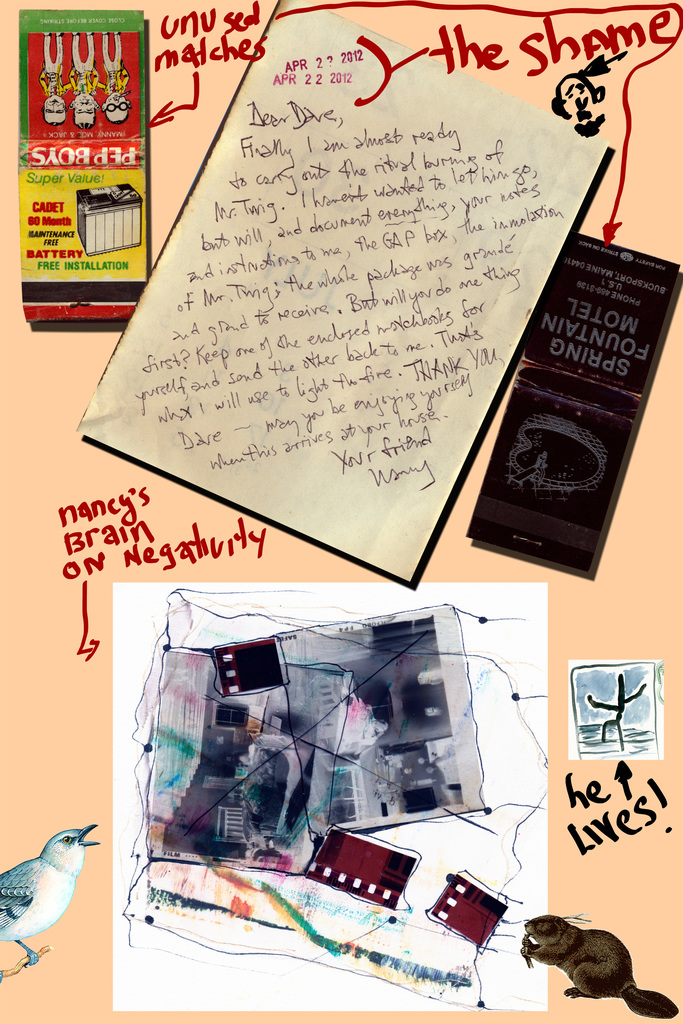 But maybe it wasn’t such a bad thing. In the interim Nancy has decided to spare Mr. Twig from the purification pyre. (I don’t have a dog in this fight. Mr. Twig may gather dust for the ages and when Nancy’s relatives find him tacked to her wall after she expires, long may they puzzle over why she kept this weird thing.) By the way, I don’t think Nancy’s Brain on Negativity is a naysaying piece. It’s more about the inversion of light and darkness. I don’t think of her as being negative. Permanently depressive, possibly. But not negative. Just observe the way she sings her song. Okay, now I think I need to go lie down. Thank you, Nancy.

No, no dreaming -  I got a sneezing mollusk from David.

Reading this blog first thing in the a.m. is better than reading the paper, checking email, and discovering money in a pair of pants combined.  Beavers playing poker? Am I still dreaming?

They are, it's true. The Z, J, and K aren't bad either. Yum. (Wonder if anyone else plays online Scrabble with herself over and over ca. 3 times a week.) Bassoon makes one wonder, too. All the wind instruments, in fact. They must require a lot of balance. Piano allows so much on its own, including a great deal of freedom if the pianist wants it.

I've had to climb down the ladder to the rung of just returning mail art :-( X

No wonder the cello is this depressive's second-favorite instrument. And I really appreciate the opportunity to show off my higher math skills--have been dying to for a year but there was no opening.

Thom, you are so right: we are all in that canoe. A thank-you is enough when the piles get so high. Years ago when that Crocodile Dundee actor hosted the Academy Awards, he immediately ordered the entire audience of Beautifullish People to follow the 3 G's if they won: "be Gracious, be Grateful, and Get Off!!!" Maybe you should pretend you're in that guy's audience for a bit, David, for the sake of your sanity and creativity. We can't have you going under.

Mr. Twig is safe on the wall and enjoying himself, but any changes or events will be publicized, do not fear, thanks Thom.

Ah... the beaver bereaves his industriousness, and the bird belies his own happiness, or perhaps the other way around?  Anyway, the story of your totems in the grand scheme makes complete sense--even more so to IUOMA-ans who can relate to the trope of never enough time for mail art, nor for all the gratitude we wish to send back out to the universe.  But just admitting the intent of gratitude makes the universe happy, I think. We're with you on this one--and all in the same canoe, David, is what I mean to say.

Been keeping an eye on this Mr. Twig saga,--and LOVING IT--so, Nancy, you better keep us apprised of any developments or conflagrations that that stick-y character gets himself into.

Ah, Nancy, you're a good soul and I'm glad to see your "higher" math skills are fully functioning. And, yes, scientists do report that beavers are active gamers during the slow winter months. In fact, there's alarm in some circles because online scrabble seems to be eating into their dam building time. Alas, one more marker of the end times. Cue ominous cello theme.