October 18, 2011 - Katerina Nikoltsou is an incredibly talented, prolific, and enthusiastic artist who keeps eternal network friends connected around the globe. Lately, she has been chronicling her European travels in her mail-art. She has distinguished herself with triumphs in many of the current "movements" and projects, including those especially close to my own heart such as Sandpo, Trashpo, and Asemics 16.

Katerina is also very active in Fluxus, which has been inherently connected to the mail-art network for decades. In "Short Statements About Mail-Art" (TAM Publications 2011), IUOMA founder Ruud Janssen identifies a "second generation [of mail-artists] in the 60's and 70's when FLUXUS joined up and a selective group experimented with the mail system."

Fluxus has clearly contributed to the identity of the current international mail-art movement in numerous areas including concept art, performance scores, and visual poetry, only to scratch the surface. Indeed, a plausible case could be made that after the "break up" of the "Old Fluxus" (identified by some sources as having occurred in the late 1970s) in the urban centers of the United States and Europe, the mail-art network carried Fluxus ideas to new centers and inspired new generations of artists to participate. Nearly all the artists associated with the current iteration of Fluxus participate in mail-art in some way. Thus, you are likely to encounter Fluxus work if you are a mail-artist.

And Fluxus artists working today identify themselves with stamps. Through exchanging mail-art, it is very easy to begin gathering a sizable collection of Fluxus stamps from all over the world. In addition to all the great art she sends me, I have received the most AMAZING Fluxus stamps from Katerina Nikoltsou. As you can see in the top scan, she included stamps from the Fluxfest in Chicago (USA) last winter/spring. I am thrilled. Here is Katerina's note that came with the stamps: 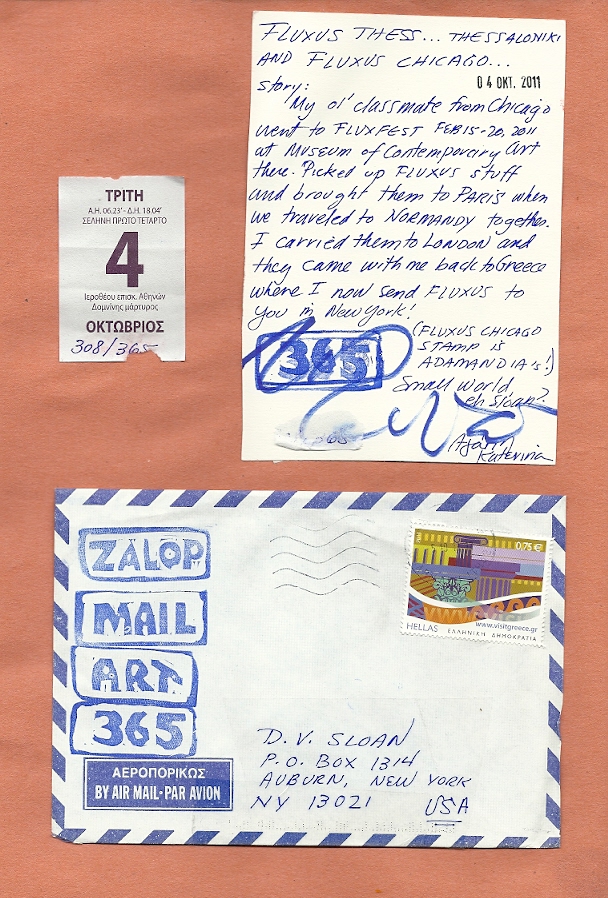 Also note that Katerina is participating in Ruud Janssen's ongoing Fluxus word performance score project by disseminating "Zalop" in her mail-art. A series of Fluxfests were offered in the U.S. during the past year at locations including Illinois, Missouri, Texas, and New York. These have produced all kinds of interesting Fluxus material. Here is the poster (found online) from the Chicago event: Many thanks to Katerina Nikoltsou for this news from the Fluxus front!

IUOMA founder as well as archivist and mail-art historian Ruud Janssen is also a recognized Fluxus artist. His colorful hand-painted envelopes are known throughout the network. Recently he has been producing stunning variations that include Fluxus words, Fluxus themes, and new designs.

Since joining the IUOMA, I've become so intrigued with Ruud Janssen's envelope art (unique to mail-art practices) that I have been gathering as many as I can and also trying to see as many examples as I can received by other people. I was very pleased to find this this piece in my P.O. that I am blogging for the first time: 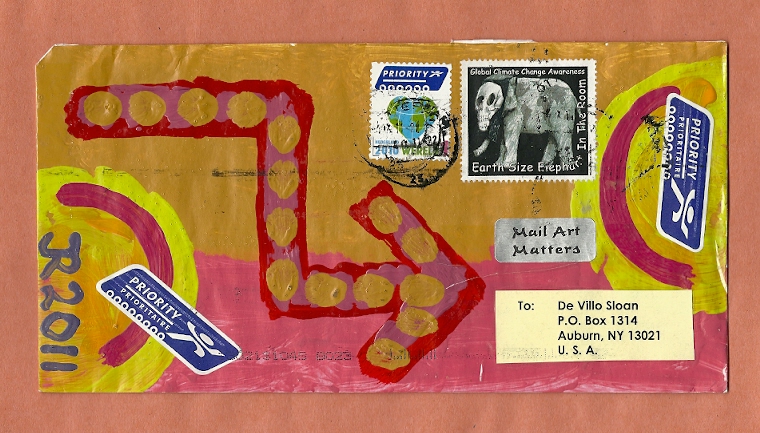 I have no idea how many of these envelopes are in existence. They are apparently done in acrylic (and survive the postal system well). The colors are always fantastic and, upon examination, extremely subtle and textured. (Ruud is a painter; looking at some of his work in that area provides a context for what he is doing in mail-art.)

I believe I am beginning to see several themes that recur, the piece above representing communication and interaction through the eternal network. You can find variations in different forms, sometimes two people engaged in dialog. The dotted arrow with its hues of deep red and gold is fantastic and not adequately reproduced in a scan; for me it suggests activity and movement of art passing through the network. To see more hand-painted envelopes and stellar mail-art, make sure to visit the IUOMA blog that Ruud Janssen maintains:

Since 1988, Ruud Janssen has been producing materials to spread the message of IUOMA (including contributions by other artists to help the cause). Logos and other IUOMA-themed pieces (try a Google search) have already established a solid body of mail-art unto themselves with fascinating designs and messages, definitely earning a place in network history. Many who receive work from Ruud find IUOMA materials to pass through the network to other artists. He always manages to include a written note: 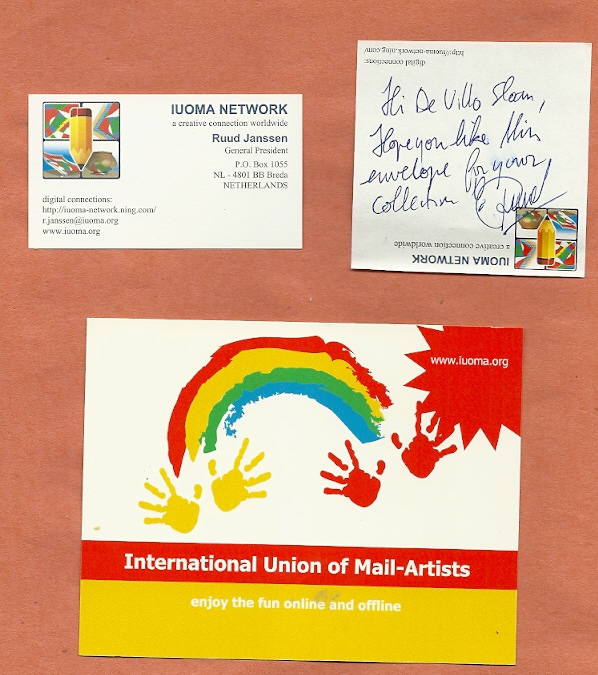 As ever, many thanks to Ruud Janssen not only for the mail-art but also for all he does for IUOMA and Fluxus!

I have been looking for an appropriate place to document the performance score JF Chapelle sent me. He is a great mail-art friend as well as a Fluxus artist: 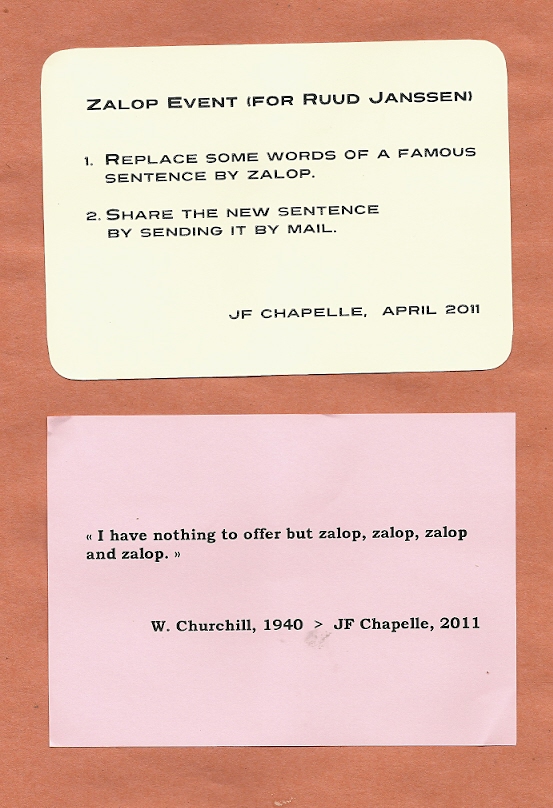 Ruud Janssen's Fluxus word Zalop has been a recurrent theme through this blog. JF Chapelle's score is yet another contribution to this world-wide score that has attracted so many mail-artists. To learn more about the Fluxus word performance, as well as individual words such as Zalop, check out these links: 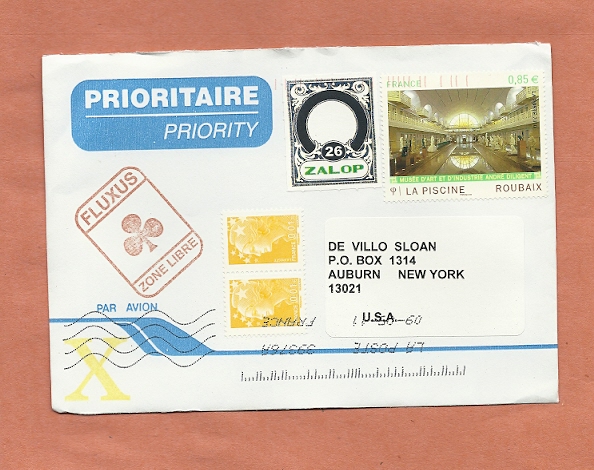 Despite efforts in some quarters of the mainstream artworld to confine Fluxus to a specific group of artists in the past, despite the claims by some critics to ascertain the movement ended circa 1978, the evidence seems to support a situation very much to the contrary: Fluxus is alive and well. Many thanks to Fluxus friends in the mail-art network and at the IUOMA!

Comment by De Villo Sloan on October 22, 2011 at 8:22am
I don't have my cryptology hat on at the moment. I think there must be graffiti in Zalop City.

Comment by De Villo Sloan on October 21, 2011 at 6:26pm
I meant experimenting with Street Art.

Comment by De Villo Sloan on October 21, 2011 at 6:04pm
Cheryl! I didn't realize that was your Zalop piece you posted below! I saw that in the gallery. You're experimenting with spray paint? COOL> I'll send you some spray paint.

Hi Erni, thank you for the post because I believe there are stories that must be retold for the benefit of the many.

About this "centralized administration" idea - it reminds me of Sandpo. Sandpo is a mail-art movement that has no connection to DaDa or Fluxus other than historic influences. You and Katerina had a huge impact on the formation of Sandpo as a result of your involvement in Haptic Poetry - in terms of producing interesting art, that is.

The early iteration of Sandpo did indeed use a model of centralized administration. The results were a disaster. The worst offense, of course, was the attempted expulsion of Cheryl Penn from the movement because the sand content of the clay she used was questioned. The now disbanded SandPo Lice were another Kafkaesque horror.

It took Diane Keys, functioning as Minister of Propaganda, to "clean-up" Sandpo and institute massive reforms. Hopefully, the movement is now free from the oppression of its first "centralized administration." I admit my own errors in this regard. The lesson of Sandpo does send a warning about centralized efforts in arts movements and does have relevance to the current discussion, I think.

Comment by De Villo Sloan on October 20, 2011 at 9:48pm
And there you have it too - boggles my mind that someone could make a decision that Kurt Schwitters could or could not be part of something.

Some of my lack of understanding is, I think, because "movements" in the United States are less formal than counterparts in Europe. The Beat Generation is a good example. Usually, movements are identified by critics and academics after the fact in the US. The Beat Generation idea - as you well know - was created by the media. The members willingly went along with the idea but they originally had no stated purpose. The name of Black Mountain group or Black Mountain Poets (Ray Johnson technically has some membership rights) was a category created by critics. Commonalities among the artists and writers are not even that easy to identify. Accidents of time and location caused them to be linked together in history.

In comparison, even DaDa appears highly organized and the work of the artists shows they shared very similar ideas.

Thanks for this interesting material, Erni.

Comment by De Villo Sloan on October 20, 2011 at 7:06pm
Let me clarify: DaDa did not have nor does it currently have "centralized leadership and administration."

Thanks Cheryl. Anything Zalop is extremely relevant to "A State of Flux."

More Dharma DaDa, Erni! When I was looking through DaDa Funeral articles, I noticed several writers commented in various ways that early DaDa was very cohesive as a movement despite "a central administration" or "centralized leadership."

That returns us to the earlier point about Fluxus leadership. George Maciunas did try to establish a centralized leadership for Fluxus. Fluxus and Dada are very different for many reasons, I think, but this leadership issue is one. Trying to rally any group of artists around "centralized administration" is bound to create difficulties.