April 30, 2011 - Another Fluxus word by Ruud Janssen has found its way through the network and fully into the world. Many mail-artists are receiving these words as part of an ongoing performance score that Ruud first created in 1988. The lexicon of Fluxus words is growing as are varying examples of these hand-painted envelopes, done in acrylic. I'm always suggesting to friends to look at the work being posted on Ruud's Fluxus word blog:

This Polut piece hit a total home run with me because the deep red on gold letters happen to be my favorite colors. The letters placed on a light green and blue field with additional abstract brush strokes makes a winning composition, IMHO.

Reading about Fluxus performances of the past and seeing artwork is all well and good. Being able to witness a Fluxus performance unfold, before one's very eyes, is an experience not to be missed. The vibrancy of the colors on this envelope and the newness of these words that are not yet fully understood speak very much to the fact that this is a Fluxus of The Present.

At this point, there is an IUOMA group devoted entirely to one Fluxus word alone: Zalop. The Zalop threads speak volumes. Zalop, thank heavens, doesn't produce endless discussions about agreed-upon meanings. Zalop does inspire others to produce work incorporating the word and thus carrying it into the world. Here's a hand-painted envelope I received from Cheryl Penn (South Africa). She founded the Zalop group at the IUOMA: My response to a new Fluxus word, a response very likely similar to many other people, is to Google it. Usually, the search brings multiple, often contradictory results. Sometimes the words are connected to computer technology (this is a strong pattern). Sometimes they seem to be words from different languages. For instance, one of the more solid definitions I could find for Polut comes from Finnish meaning "road" or "thread."

I've noted another pattern where at least some Fluxus words are acronyms for various political organizations spread across the globe and with no common connection. Fluxus words definitely hold multiple and sometimes contradictory meanings. I strongly suspect some are puns. Here are a few observations that might help anyone digging into Fluxus words:

1) The Indeterminate: The concept of indeterminacy has been central to Fluxus for decades. Something you receive is very likely to have a personal meaning for you. This same piece will spark different and equally valid meanings for others. Ultimately, a fixed or agreed upon meaning cannot be ascertained through any rational process we know. (There is a certain genius to being able to construct something solidly indeterminate, I think.) Fluxus words might ultimately be indeterminate.

2) Jokes and Puns: Never underestimate the sense of humor in Fluxus. Look at the Fluxus word blog, some of them are downright funny. The entire Fluxus word project could be viewed - on one level - as a satire or parody poking fun, or pointing out the futility, of people like me even attempting to analyze any of this.

3) Numbers: Might Fluxus words actually be a numerical system? Don't start laughing just yet! Look at Fluxus words. Look at the number of letters used to compose those words. Look at placement of vowels and consonants. Remember, in concrete poetry, LANGUAGE IS MATERIAL. Here's the first hand-painted Fluxus word envelop I received from Ruud Janssen:

I also never forget that IUOMA was the first Fluxus word. With Polut, this recent Fluxus word sent by Ruud, the envelope itself was the primary mail-art. I'm also very pleased to receive inside the envelope some IUOMA promotional material and info about Ruud's books. Here is one of the pieces that's certainly a nice piece of mail-art: 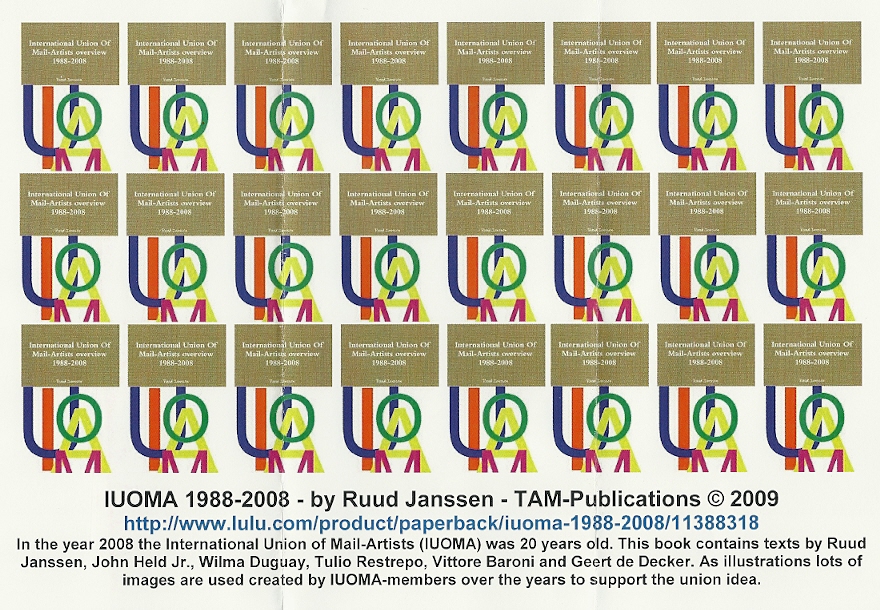 If you are interested in the history of mail-art and the views of central figures in the movement past and present, I don't think you can find documentation any better or more thorough anywhere else. I've found Ruud Janssen's interviews and article online too, and they are very helpful in trying to get a complete and global picture. Also make sure to check out the IUOMA blog:

Many thanks again, Ruud!

Comment by De Villo Sloan on May 3, 2011 at 12:37am
Then the Zalop DOES indeed fit the Polut! Situaty - good one! Is that a real Fluxus word or a made-up Fluxus word? Oh no, real Fluxus words? We have a situaty.

a word needs to fit the receiver..... Off course.

Comment by De Villo Sloan on May 2, 2011 at 12:22am
I thought so Kat, I mean IOPA. Almost sounds like a Greek goddess, which of course we know you are. Or is IOPA: International Order of Postal Artists? With Polut, I thought Politbureau? No. Anyway, I appreciate the info because the next one he has sent me - I am sure it is also a Sandpo Word. Oh yes, and Cheryl can be a complete Zalop in my Polut sometimes. But I don't know what I'd do without her.

Yes, I think Ruud definitely considers what Fluxus word goes to whom. Cheryl is a Zalop, and you are a Polut (which is also a relative to a LifPup!)  I, on the other hand, am "IOPA"....I OPA! 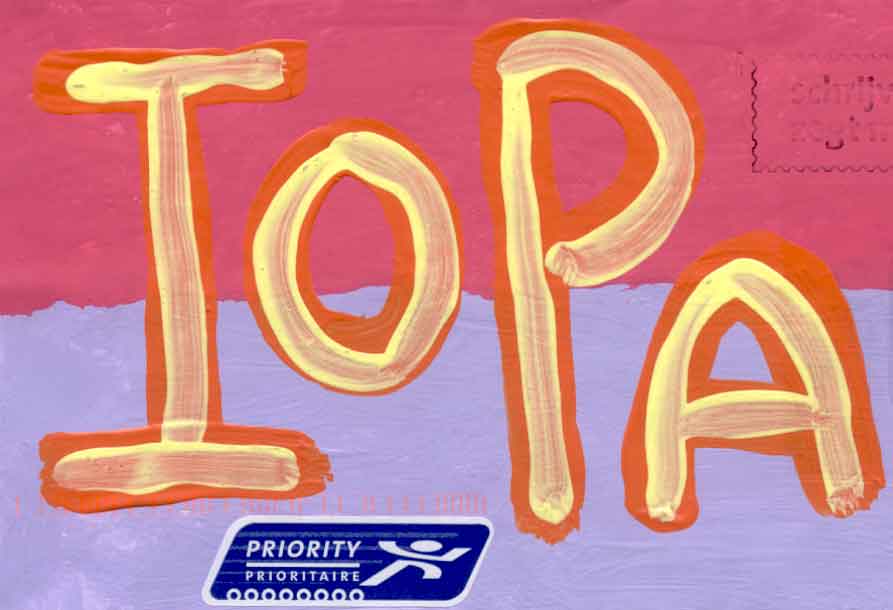 Comment by De Villo Sloan on May 1, 2011 at 11:08pm
Do you think Ruud thinks about which words he gives to people? He knows many of us through mail-art and IUOMA discussions. Or is it random? I saw a scan of another one I'm getting. This one I know, I'm sure what it means specifically. Of course, I never would have thought of you as a Zalop. As time passes, I think more and more: "Cheryl is a Zalop." Sorry I missed you. Great comment.