Only Once in a Quadringentesimus Does Something Like This Come Along...

A light fell upon him as he contemplated the great Shroud of Elgin... 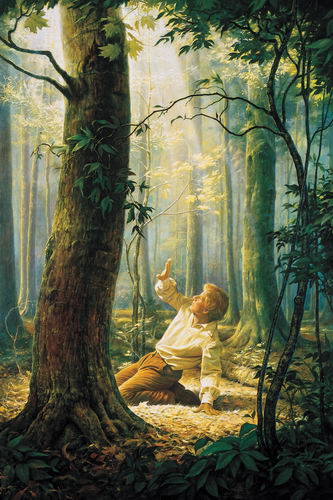 At first the light burned a little... 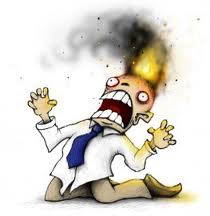 Then he was filled with the spirit of Trashpo, and De Villo Sloan felt compelled to share with the masses the miraculous wonders of that tattered blue cloth--which sometimes glowed in the dark if you stared at it hard enough in the blackness of night.   And so, the great Shroud was torn assunder and sent to the far corners of the earth.

As a result there now exist many denominations of the Church of DKult, with many altars and shrines that hold pieces of that blessed relic.  Devotees are no longer forced to spend their life savings to make the long pilgrimage to upstate New York to witness the mircles.  Now they can bask in the tattered remains of that humble article of clothing in their very own neighborhoods.

My altar piece arrived in a simple envelope--secured with duct tape--so I knew the envelope had to contain something of grave importance... Something Trashpo-rific...

I immediately made a place of honor for the holy relic: 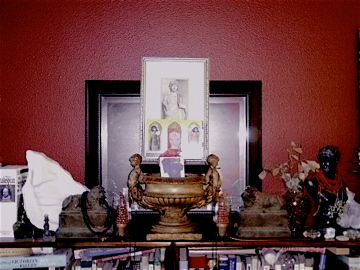 To the left you might see a representation of the Egyptian god Osirus, torn to shreds by his brother Set and scattered around the world (not unlike the Shroud of Elgin).  To the right, you might see a bust of Diana, goddess of the hunt and the moon--keeper of veiled mysteries (also like the Shroud of Elgin).  One is represented in white; one is represented in black, just like the twin pillars Joachin and Boaz at the entrance of King Solomon's Temple--the gateway through which one had to pass in order to experience the mysteries within. 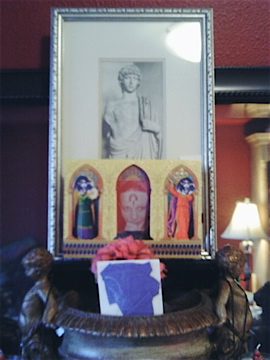 The shroud lies resplendant under the watchful eyes of the triple image of DK, who in turn is watched over by the syncretous god Antinous.  Antinous was the lover of the Roman emperor Hadrian, and was the only real-life human person to be honored with the rank of "god" by the Roman Empire after he drowned in the Nile... Antinous represents the miracle of, "meh, stranger things have happened..."

Accompanying this sacred objet were several documents touting its authenticity.  They had the appearance and timbre of a chain letter, but for the faithful trust I owe to the power of story-telling, the mention of several respected mail art acquaintances, and the fact that the letter was COLOR-copied, I took it at its word as being the REAL THING. Additionally, several other documents were enclosed, in a kind of Trashpo FRENZY...

Holism (with contributions by both Dark Wall and Marie Wintzer): 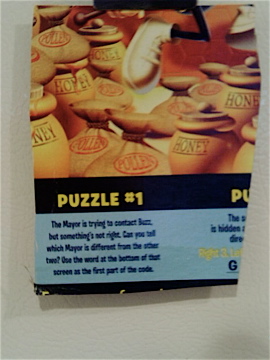 These things paired nicely with a previous work of Trashpo sent by De Villo--a rare and complex piece of Trashpo indeed: I'd been told that there is no such thing as a 'free lynch,' but apparently financing is available, and flood insurance is guaranteed in case you are overwhelmed by your tears of joy.  The large array of chair options on the menu is ideal for recipients who are swept off their feet.  Composition within this piece is impressive, and painted elements provide a trompe l'oeil distressed effect apreciated by connoisseurs of l'arte Trash-poètique.

I am always most impressed when I learn something new, and De Villo didn't disappoint... he sent some new vocabulary for me to enjoy... Amen. But the truths we are given now by DK are only the truths that our aphid-minds can handle without blowout of the primitive circuitry. I believe that eventually DK will reveal all to the worthy.

If only our shroud shreds could speak...

Along with all the other Elgin Shroud Shred lore that has surfaced in Thom's great blog, I'm very intrigued by this idea that the shroud has some sort of time travel capabilities.

DK had the shroud and wore it until that fatal night in March 2011 when it left the Elgin Mansion. Your shroud shred, then, was on the infamous tour bus. Perhaps its time travel capabilities enabled DK to bring Mick Ronson "back to the future," as they say.

It also opens the possibility that we might well expect a visit from cyborgs from the future that look like Kurt Schwitters who have traveled back in time to try to stop the rise of Trashpo & replace it with Schwitterpo. Remember Schwitters' final words" "I'll be back."

Now I KNOW that Shroud can travel through time--that news article was written before I was BORN!!  Eeeerie!

Unfortunately, in 1983 the onset of global warming caused the particular species of Himalayan sheep from which the special wool was collected to become extinct.  Therefore, there are no more togas available for distribution. (This is undoubtedly why NBS's phone went to automated voice mail.  The only way to find one is every once in a while on eBay--but they cost like a tra-zillion dollars (NOT the DKult-DK-doll currency either!!).  All one can do is say a special intention to a tatter from the DK Shroud of Elgin that --MAYBE-- someday your path will cross with someone wearing one, so you can bask in its saffron glow.

We're sorry, the financing options drawer is now closed for permanent renovation. Perhaps KDJ can help you in the orders department. Please press 1 to find out. 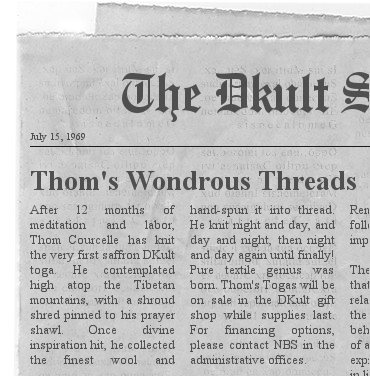 What a deep understanding you have of the shroud, Thom. It's mind-blowing. Please continue to pass your perceptions about it on to the rest of us. You are very clear despite its mysteries, thank you !

Your Shroud Shred obviously has the power to travel through time-space, Nancy. It must have miraculously saved you from the stampedes and mobs of mud-soaked hippies of Woodstock. Somehow, the Shroud must have KNOWN that you were going to be a Mail Artist in the future, and it needed to protect you.  This does not surprise me about the Shroud at all. Subscription to the Journal of Post-Dog-matism has been cancelled.

The mud would have been fine. It was probably second-best to the music. It's the hordes of people that would have done me in. (Insert very loud scream here.)