First off, Diane Keys continues to document the decline of western civ through the detritus that comes her way. On the front: the battle of former tenants continues with a new player in the mix: John R. Clark. I’m sticking with Barbria Carter as her name recalls (for me) a lost heroine of merrie england balladry. He sings: “Poor, poor Barbria Carter / her true love stole her garter / and then gave her up in barter /for three geese shy of a gaggle / Twas then poor Barbria Carter / retrieved a knife from her larder / and stabbed the poor fellow that hart (use Irish inflection) her / then went to fetch 18 or so bagels.” On the back the headlines screamed: LYSOL DSF WIPES DA / CITRUS TWIN PK. Diane is getting pretty good at spotting the coded messages beneath the seemingly meaningless mercantile mess we wade through on a daily basis. Thank you, Diane. Next Jon Foster weighs in with a nifty alphabet soup trapped under tape. There may be also some history of the Raja of Kashmir but it’s muted under the weight of the big red babel. In any case, it’s a striking piece. Thank you, Jon. 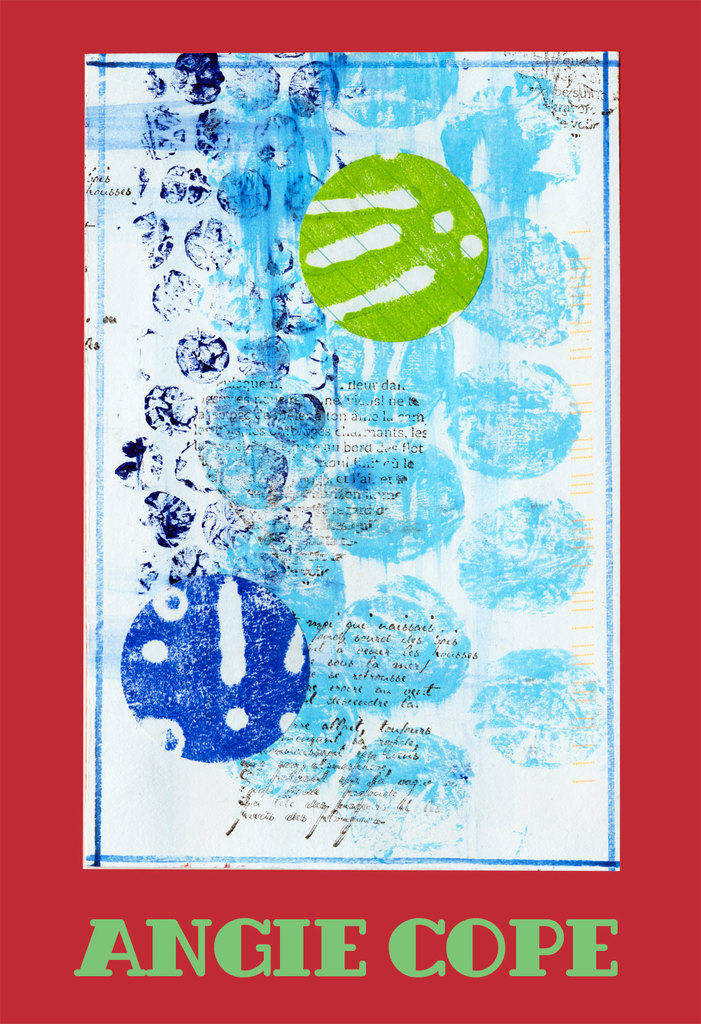 Angie Cope sends regards via a collection of blue bubbles rising up from the depths and underprinted with quotations from Fleurs de Mal. It’s all about raising consciousness. That my story and I’m stickin’ with it. Thank you, Angie. Janine Weiss has latched onto my mantra “Dignity always Dignity” and sends a yellow tie with lemons and a googly eye. Clearly suitable for dinnerwear and dinnerware, I have worn the tie on many occasions to great acclaim (Sample compliment: “You should wear lemons more often.”) Also included: some hasty portraiture committed while talking on the phone. (I also do this but they never resemble an Ensorian gallery like Janine’s.) On the back of the tie: our mutual friend Roger Moore! Thank you, Janine. Finally, out of the blue J Block of Massachusetts sents his altered portrait of Diana Ross at the apogee of her lusciousness. I hold it up to my ear and those pillowy lips seem to nibble at my lobes. Thank you, J.

Thanks again to all. See you in the mailbox.

David, I do think you do great blog presentations, bolstered by the fact people send you great stuff. (Some of us tend to receive big envelopes stuffed with contents of entire wastebaskets; I think it's called Trashpo.)

Wow, the DK John R. Clark/Barbria (?) Carter thing is true mail-art randomized performance fiction, or something. I love it.

& nail-art can now be a kind voyeurism. Great blog!

I think it was "when the locusts eat cats who piss beige--or was it when beige locusts piss on cats?"

I think there's something in Nostradamus about when "cats piss beige." Truly these are the end times...

I love how your blogs are their own little show. I'm always so entertained. I think you should host a MAIL Art Daily News show. I think you are hacking my brain as 1/ our cat peed on our rug for the first time ever (although it was beige not piss yellow) and 2; I have been doing a lot of sideways walking. How did you know this?

I agree that Barbria should be the winner. John still gets mail here, but she is definately more  popular. Isn't life just a popularity contest? do the mean girls win? Or does the underdog rise up and make a name for him/herself?

Fab stuff here! I'd love to see the whole set of Jay's beauties! Maybe they'll be made into an artist's stamp set??

Great blog with lots of great mail inside :)