A giganto barrel of work from Tic Tac, our friend in far off Starnberg. With a collection this big you could start a museum which I have done and now I have to write the copy for the exhibition catalogue. Starting in the upper left hand corner three images become a "Vagrant Story" of the viewer's own weaving. Because the photos will probably be too small to see properly allow me some description. Top photo is a scuffed sticker of Batman slowly dissolving under foot traffic, (Tic Tac refers to this as "Batman",) the second photo is the exoskeleton of an insect still trapped in a shabby spider web, (Tic Tac calls this "The Ballerina," and the bottom photo is four men carrying a large black object (She calls this The Tarantula). What I'm trying to get at here (in a leaden way) is: how she transmutes the banal into the magical. It's a gift.

Below "Vagrant Stories" two bills from the Republique de Tic Tac or $100 Beats which, if I understand it correctly, allows the recipient 50 more beats of the heart or a short life extension. All told I received 150 beats. Not a lot in the great scheme of things but they could, if apportioned properly, be responsible for one last sunset or one smooth bowel movement before expiration. I suppose it would be too difficult for the recipient to decide just how s/he'll spend those last 150 beats. We'll work toward that end unless you feel it would destroy a certain last minute spontaneity. 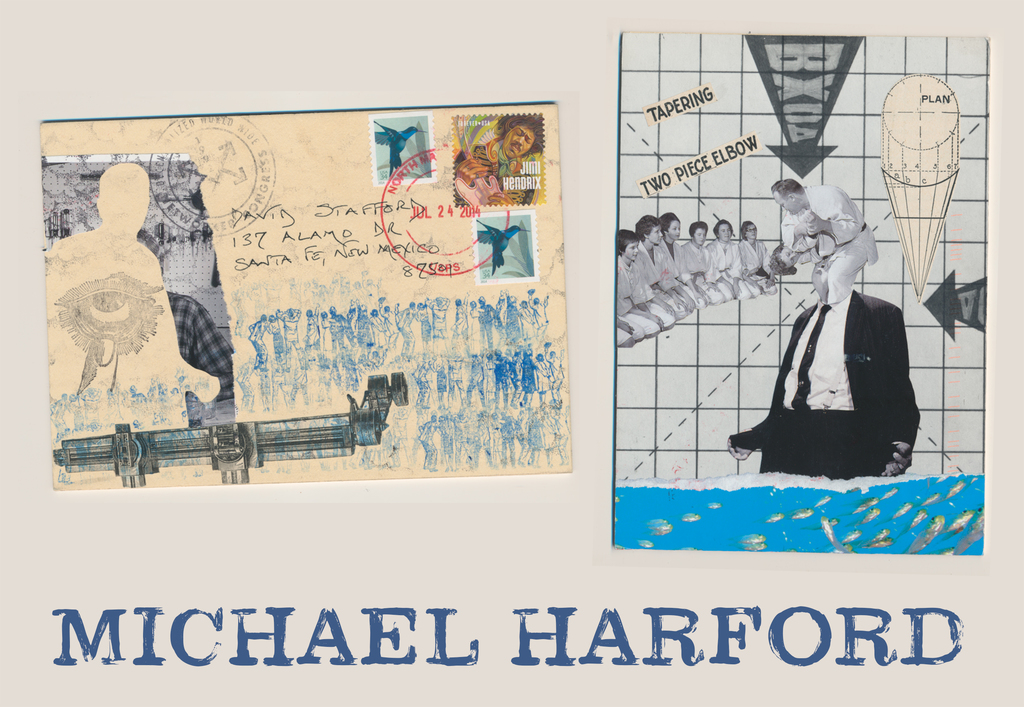 Also newly arrived this week one of Michael Harford's hand-made collages. Michael is a master of the fine x-acto cut collage technique. No little bits of white around the edges here. My guess is that Michael relies on his intuition for a lot of his compositions but frequently what emerges (for me) as a subtext is our dire slow emergency: the stressed out planet and its consequent drag on our energies. Thank you, Michael. Finally (these all arrived the same day) I received this royal admiralty hat from Lynn Radford. Originally commissioned by Admiral Negroponte of the Republic of Bananastan, the project came to an abrupt halt after Negroponte died in a suspicious manner (slipped on a peel). One hates to benefit from another's travail but his loss is my graine. I know a lot of you will be wanting to see the hat in use and to this end I have persuaded retired Rear Admiral Len Bumeister to model the hat as it was meant to be worn. (Editor's Note: New label was hastily add after Admiral Negroponte succumbed). 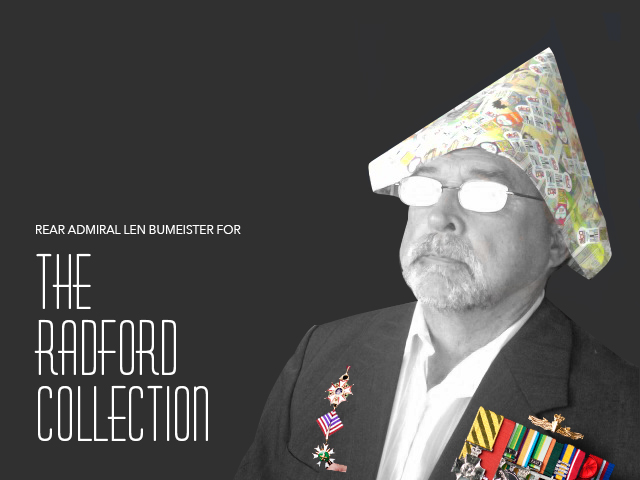 Something tells me that David is in pre-creative development once again... we'll simply have to wait until the big show is over.

Good luck with that, David! :D

What do you mean Denny's will have to wait.  Where do you plan to eat at 3am after hanging your show?

I like the Denny's idea but it may be a while before I'm able to actualize it...Getting ready for my big show...It will either be a great launch or a belly flop onto hard concrete. Or neither...

Dean, we had just that conversation via Diane Keys, over on facebook... you really should be there. :D

Lube doesn't sound too good.  Are you sure it is a place to eat?

LoL! Dean, you need to encourage them to go somewhere other than Denny's! There are far better places... like Eat 'n Park! And Quaker Steak and Lube! And Primanti Brothers!

Glad you liked the Banana Hat! Didn't think it would be possible to surprise you after the paper maché Banana!

OH just love that Banana Hat.  Now that is going to turn some heads in New Mexico.  Is it possible to have a photo of you wearing it outside of Dennys?   BRAVO Lynn , I laughed because I was expecting a Top Hat to be covered with banana labels.  You got me there.

(For your information, Dennys is a classic stop for French people visiting America.)