Along with all the other exciting discoveries that have resulted from this project, this work is also an important contribution to Holism.

This collaboration has led MinXus-Lynxus to propose the theory of “Negative Silence” or “Sub-Silence” in the visual poetic text. I hope these lecture notes will suffice to elucidate the theory:

Theory aside, here is a transcription of the Ficus & DK version of “Protect Organic Energy”:

We hope you will agree with MinXus-Lynxus that as well as being viewed as anti-art by some it is possible to read these collaborations as works of beautiful lyric minimalism.

Shotpo prosody detail from “So They Will Not Stretch.” Image courtesy of Ficus strangulensis

More material from the Shooting Gallery Project is forthcoming. Deepest MinXus thanks to Diane and Ficus for this amazing work!

For more DK Trashpo and the International Trashpo Exhibition, make sure to visit: 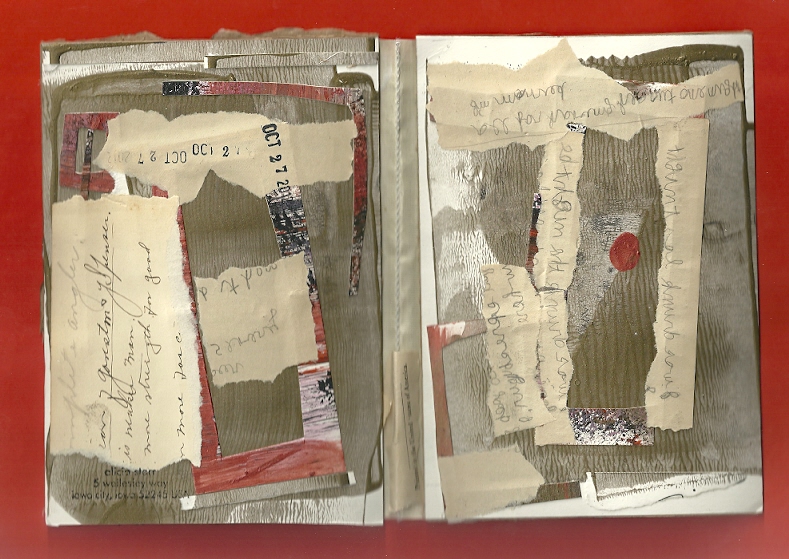 The ingenuity of trash poets is inspiring, and a good portion of it supports DKult promotion. Alicia Starr sent me this amazing D-Koder Monkey piece, solidly constructed in the form of what I consider a Trashbook. The piece reminds me of Neil Gordon's (Connecticut, USA) sacred, asemic Trashpo tablets and Karen Champlin's (Illinois, USA) object poems as well as the DKult Portable Trashpo Shrines. 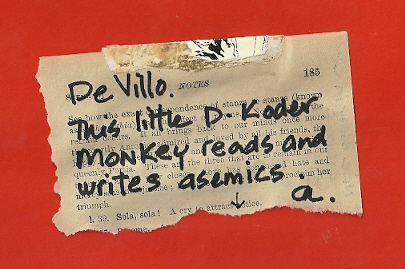 So you see the monkey on the right: I think this piece is definitely a D-Klassic.  Alicia wrapped the DKoder Monkey carefully in plastic and tape. Of course I made a mess opening it. The result reminded of classic Jim Leftwich Trashpo, so I used Alicia's wrapping and other scraps on the floor to make a Trashpo scannerbed composition in Alicia's honor: Many thanks to Alicia for FAB mail-art!

I admire Matthew Stolte's visual poetry a great deal, and he has been a faithful correspondent. He frequently incorporates found material in his work. Strangely, the material on the back of an envelope he sent me (above) is Matt's first piece of acknowledged Trashpo.

He and I exchanged some messages on Google+ or somewhere, and I wrote I considered it asemic Trashpo. His (reconstructed) response: "That's Trashpo? I get it." The truth is: He has been doing it for a long time; but it is always a pleasure to welcome someone officially to DKult and the (inadvertent) Church of "Trashpo Jesus Jim" Leftwich.

Here is a link to Matt's Trashpo entry. His ConstructionSea blog is even better than the former Illegitimate Prescriptions. A hub for all things vispo:

First, apologies for these terrible scans that do not do justice to the brilliance of this wondrous piece by Not Hi Ng. He calls this an “Automated FLUXUS activity selector” or in other words a FluXus event score machine.

Not Hi Ng has written not one but six event scores. The “Automated FLUXUS activity selector” chooses one of the scores, which the participant is meant to perform. Of course, interacting with the machine is also a performance. Here is another scan that, hopefully, enables you to read the scores:

Every time I engages with the machine, first pressing the yellow button, the red light directs me to the third score: “Do Nothing, keeping in mind that nothing is as it should be.” I am more than pleased to perform the nothing score. It gets better every time. Deepest thanks, Not Hi Ng!

Among many other artistic and literary pursuits, Claire Dinsmore is experimenting with Trashpo. The envelope I received from her contained a plastic bag into which, it seems from my perspective, she neatly folded and economically stuffed the contents of her waste basket:

In addition to junk mail and postal debris I believe I detect refuse from Claire’s art projects. Bravo! One of the most redeeming aspects of Trashpo is its commitment to recycling. Making use of my pioneering scannerbed composition method (now being copied by everyone!), I combined the material Claire Dinsmore and created this recombined Trashpo:

Claire Dinsmore favours longer Trashpo works (as compared to the usual postcard-size fare) that is meant to be assembled and disassembled by the recipient. From another point of view, she creates a narrative rather than lyric Trashpo. The permutations of variant sign structures and the assemblage and deconstructive metaphorical possibilities of the work make this, firmly, visual poetry. Additionally, we view Trashpo as the ultimate realism and a viable form of social realism.

In this work, Miss Claire is the main character and that character is defined by the refuse around her. The Trashpo allows us to view her life in the capitalist system, her social and organizational connections, forces that imperil her individualism, her struggle as an artist within the system, the artificial culture that threatens to engulf her, and much more. A truly moving work. Here is the envelope:

Magnificent! And the reverse:

Many thanks to Miss Claire Dinsmore for this thought-provoking work! Visit Claire's website!

Arac, who is known to many friends already for her Cerealism, sent this absolutely stunning work that showcases her talents.

This (above) is an absolutely beautiful – dare I call it lush? – cerealist collage measuring approximately 8.5 X 11 inches. Cerealists – connecting to the larger practice of visual poetry from which Trashpo is derived, enjoy playing with the letters in addition to the images. Arac has incorporated Dkult themes throughout the work.

Cerealism has noble roots in the Great Tradition of mail-art. Ray Johnson himself likely established the genre. The slick surfaces and subject matter of cerealism do seem to suggest Pop Art. All “insiders” (wink, wink) know for a fact Mr. Andy Warhol borrowed the Pop Art concept from our beloved RayJo.

Miss Cara has “got it all together” with stamps and packaging. This is a very “groovy unit”:

Thank you so much for this lovely work, Miss Cara.

I have received and continue to receive amazing Trashpo. My deepest thanks. You can expect many more postings in my ongoing Trashpo series.

Like the chance meeting on a dissecting table of a sewing machine and an umbrella - amazing performances by each - thanks!

This blog is electric. I'm talking electric squared. I can feel it in my spleen

At least some of the shotpo concept revolves around "lucid" & "incomprehensible." I see a lot of talk these days in the area of the heinous "conceptual poetry" realm of knowingly rendering things incomprehensible or unintelligible. This is now considered a valid activity by someone somewhere that is supposed to achieve some purpose. Ficus rendered something already unintelligible completely incomprehensible, among other things.

(typo: I meant "threat." I was referring to your not being able to read what you wrote)

ha ha ha - non of the depth you're vast imagination has a remarkable talent for eeking out...You are indeed an alchemist my dear!

You played right into my hands, Claire. I am cutting and pasting your prose into a new interview. You are remarkable for generating a vast amount of relatively lucid copy on very short notice - a lost art. But I did need a refresher on the original intent. Thank you.

I am in possession of such vast mail-art treasures lately that I don't exactly know what I have. Believe me, I will soon find out.

I have not seen "Guess Who" turn up anywhere else. Our mutual friend converted his blog into a 24-hour-a-day rant against pursuing higher education. Although recently, he seems to have gone back to posting mail-art again. It could make an appearance there.

ha ha ha - maybe the treat looms too loud in your consciousness...?

and: darling, I've told you a number of times already ('fraid not nearly as complex and/or interesting and/or meaningful as your blog might infer): "@de villo: lol - I explained that to you sir! guess you forgot as you seem to take a lot of time opening your mail... (me like Vizma: the moment I retrieve it from the mailbox, I'm already opening before I've even gotten upstairs to my apt!) Aaaanyway, that was an env. of things I had gathered to put into the pockets of your Trashpo Folio/Fluxkit before I began making it, yet forgot to enclose when it actually transpired. (So: put the trash in the piece where it belongs boy!)(or not. as you please.))

Carina, I just hope you enjoy the Trashpo. I wrote it, and I can't even read it. Yes, Shotpo was a big project for M-L. I still have the Shakespeare sonnet & the Holism Manifesto (totally shredded) to document but probably just at M-L. I am behind on blogging just a ton of great work. If you look at the work in DK's Trashpo Exhibition & what's in this blog, it is obvious Trashpo is evolving & becoming more refined (IMHO).

Great mixture of new trashpo! Took me 20 min to read. Shotpo collaboration is so good and much work! But wow I'm enjoying everyone's artwork in this blog!