"Neoism is more interesting today than when it was happening."

November 24, 2013 - I received from Borderline Grafix an amazing 16-page booklet (or perhaps zine) filled with unique Karen Eliot stamps: a treasure beyond comparison to me. The work came encased in plastic: I was thrilled to see the official, authorized MinXus-Borderline stamp! Of course, that was only the beginning. 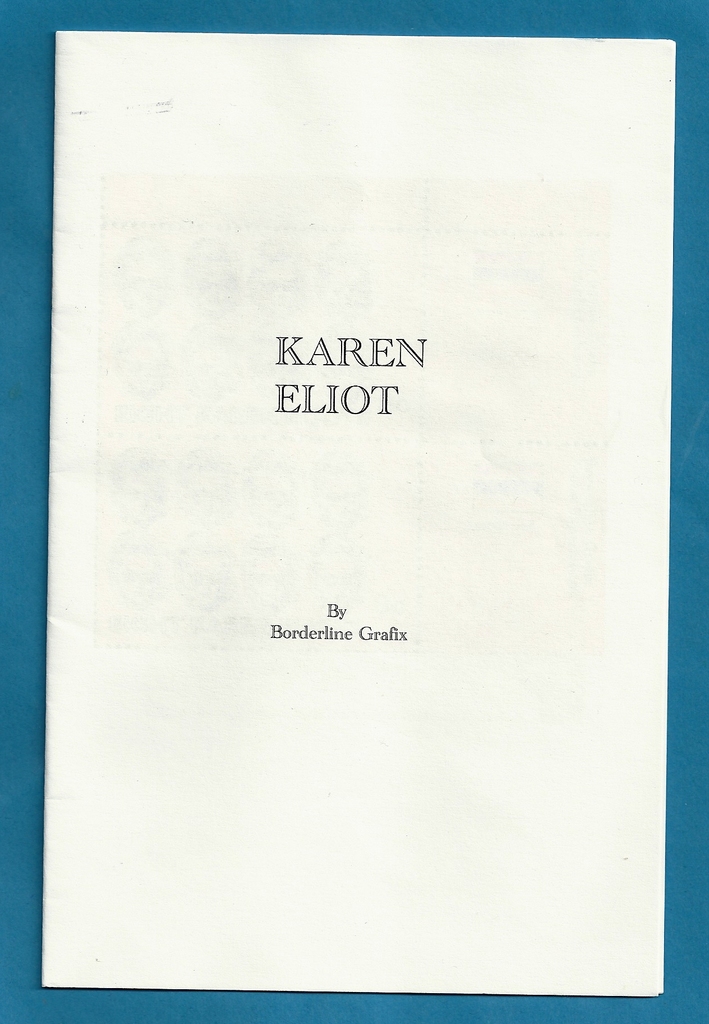 Some might fairly ask: "Who is Karen Eliot?" Karen Eliot is a multiple user identity that was very popular in the mail-art network during the (later) heyday of Neoism in the 90s (I don't think the Karen Eliot identity goes back as far as the '80s, but am not completely sure). She remains popular long after Neoism's decline.

First, there was Monty Cantsin, the open pop star identity, and then came Karen Eliot. (Monty Cantsin is usually traced to mail-artists David Zack, Blaster Al and Istvan Kantor.) Karen Eliot was created in an attempt to compensate for a noticeable lack of women in Neoism. She has evolved as a more bookish, literary character when compared to the flamboyant Monty Cantsin. The book by Borderline Grafix, a page view above, is a sequence of these specially designed stamps, absolutely extraordinary. Numerous mail-artists have assumed the Karen Eliot identity over the years for various purposes. Her popularity has never really died. For instance, there are a number of Karen Eliots active on Facebook today; and Karen Eliot mail-art was circulating last year. You can find a very large Karen Eliot photo pool on Flickr. Borderline Grafix has added a face to his particular take on the phenom. While anyone can adopt the Karen Eliot identity, she is often associated with and was probably created by British author and artist Stewart Home, a former Neoist. Above - a detail scan of Karen Eliot stamps by Borderline Grafix. 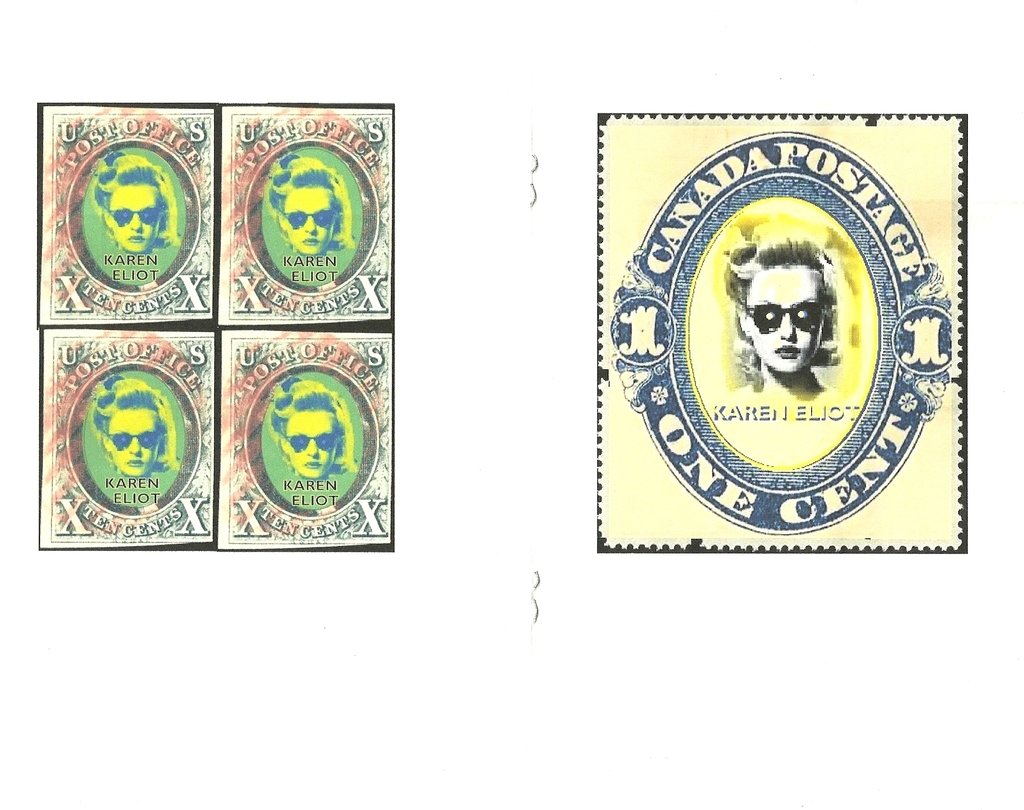 Some mail-artists who were originally involved in Neo are still active today, but their work has evolved beyond the movement. Others identify themselves with Post-Neo. For example, visual poet Jim Leftwich considers some of his work Post-Neo Absurdism. 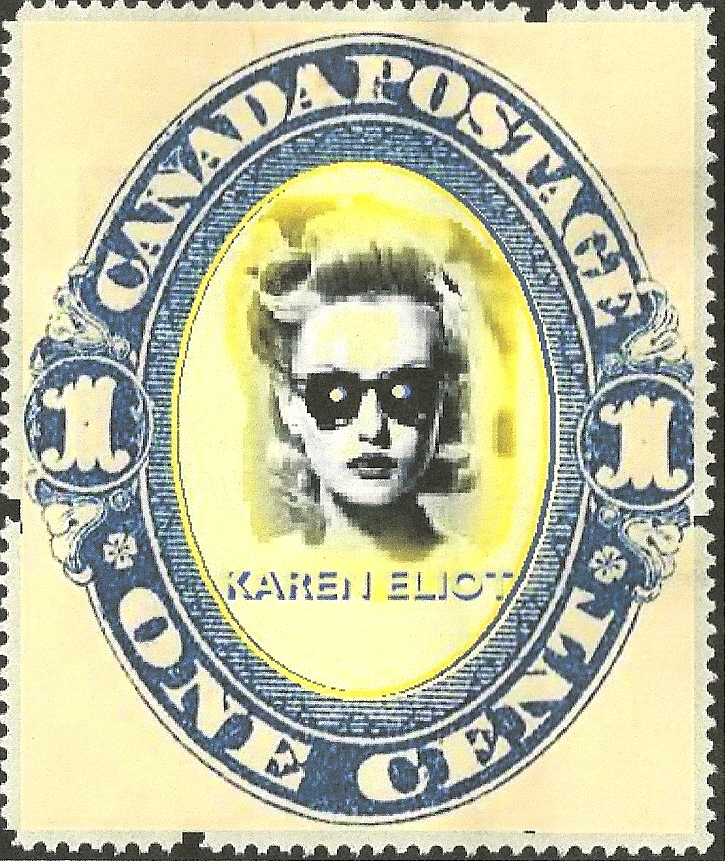 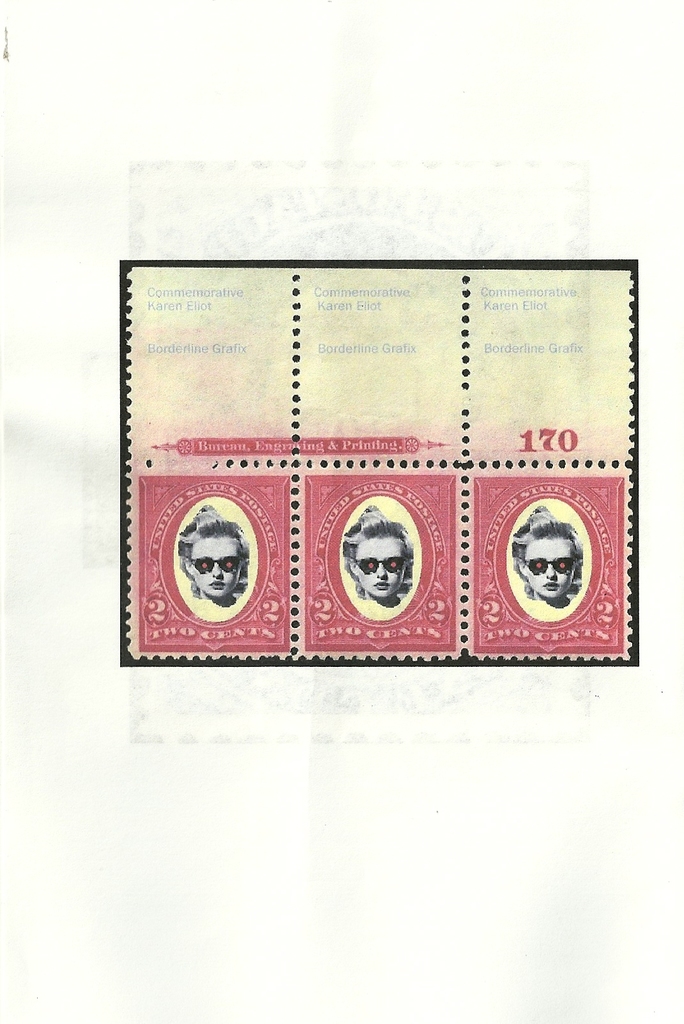 Mail-art is always a wonderful gift. This Karen Eliot book is a fine gift indeed, which I shall make sure to archive carefully as it is also a piece of the long and circuitous evolution of Neoism. Deepest thanks, Borderline Grafix!

What he said. (Thx David)