A place where you can leave information about mail art that was returned to you. Maybe we can help each other out.

You need to be a member of Return to Sender to add comments!

"POSTAL SEANCE: A SCIENTIFIC INVESTIGATION INTO THE POSSIBILITY OF A POSTLIFE POSTAL EXISTENCE" -- one of the most bizarre Mail Books I have chanced upon In the author's (Henrik Drescher) own words, and in his own capitals:

"AT LONG LAST THERE IS EVIDENCE VERIFYING THE EXISTENCE OF THE AFTERLIFE.

THE IRREFUTABLE PROOF OF WHICH IS CONTAINED IN THE PAGES OF THIS BOOK, WHICH IS THE CULMINATION OF FIVE YEARS OF EXHAUSTIVE RESEARCH INTO THE POSSIBILITY OF A POSTAL PORTAL CONNECTING US WITH THE DEAD.

THE PROCEDURE WAS SIMPLE: BY ADDRESSING CORRESPONDANCE TO PERSONS IN THE AFTERLIFE AND AFFIXING POSTAGE SPECIFICALLY DESIGNED TO PASS THROUGH THE MAIL SYSTEM'S POSTLIFE PORTAL, IT COULD BE DETERMINED WHETHER IT WAS POSSIBLE TO COMMUNICATE WITH THE DEARLY DEPARTED, THEREBY ESTABLISHING FIRM EVIDENCE OF ETERNAL LIFE IN THE HEREAFTER.

I AM PLEASED TO ANNOUNCE THAT MY FINDINGS PROVE THAT THE AFTERLIFE EXISTS. OF THE LETTERS MAILED, 87% OF THE CORRESPONDANCE WAS NOT RETURNED;"

So Dreschler and 8 of his accomplices mailed envelopes to 100 or so dead people, from all eras, from all countries.  If they were not 'Returned to Sender', he assumed that they were delivered and the recipient was indeed alive; if they were returned, the assumption was that the addresse was dead.

Now wearing your 'Return to Sender' hat, you might think that if the envelopes were not returned to him, the postal authorities had just thrown them away  -- but that would not be a 'scientific' conclusion; 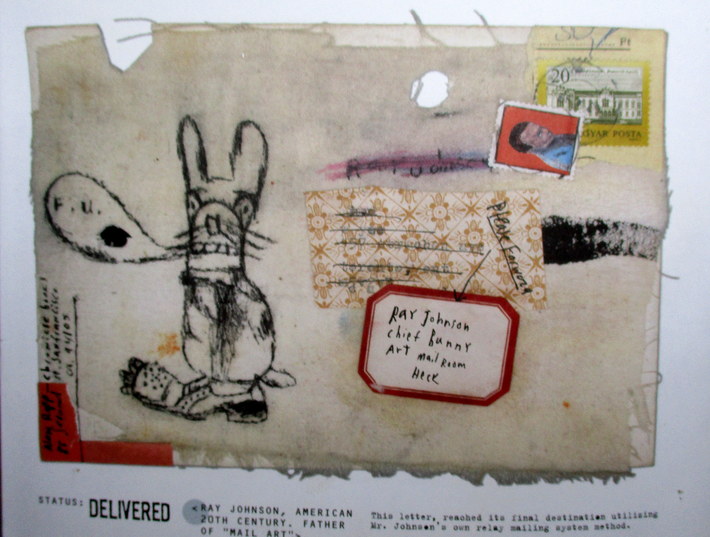 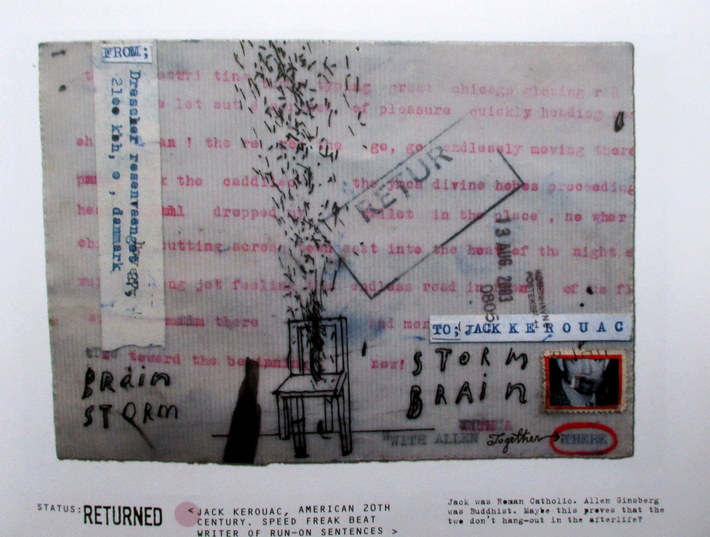 Last words from Henrik:" AFTER CAREFUL ANALYSIS OF THE DATA ACCUMULATED I CAN DEDUCE THAT DENMARK IS THE MOST INEFFECTIVE PORTAL TO THE AFTERLIFE. IF ONE WISHES TO COMMUNICATE WITH THE DECEASED, THE BEST ODDS ARE TO MAIL FROM ROME, ITALY, WHERE MY SUCCESS WAS 100% DELIVERY TO THE AFTERLIFE." (I also have a Buddy Holly Shrine with little stones from his grave at Lubbock Cemetery, Texas, and from the Norman Petty recording studio, Clovis, New Mexico)

Heide, possibly you can e-mail them for more inquiries?

Lastly one back from Gerda Osteneck. I double checked the address.  Seems quite correct. 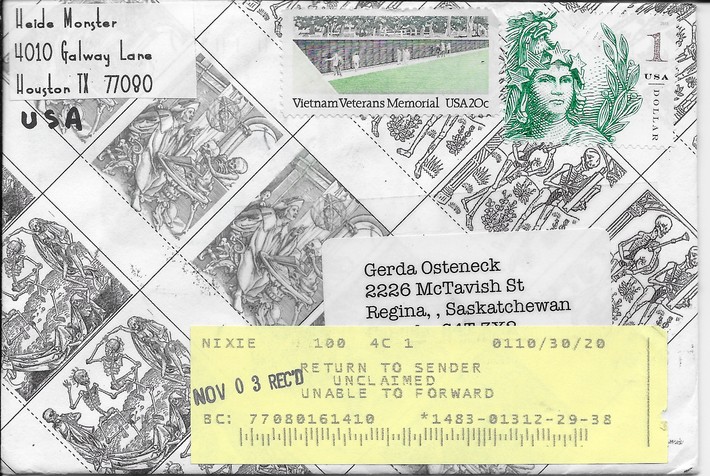 OK so maybe my postcards were too fragile, I had a nixie to The Sticker dude, just sent it again.  But what about Shirley Gergel?  Active? 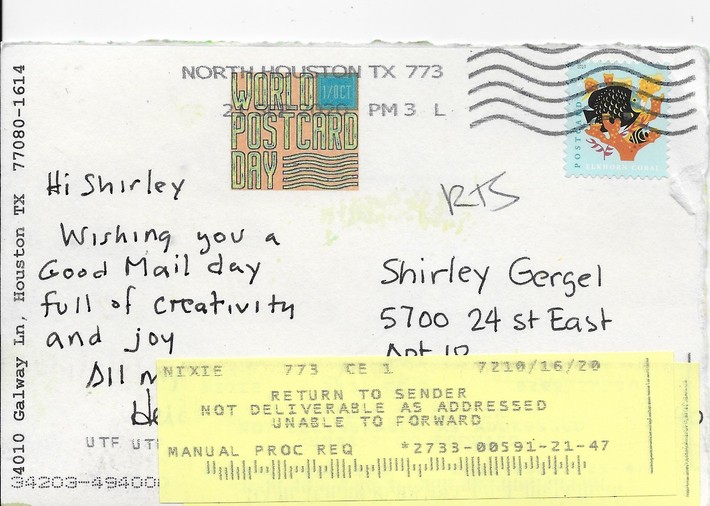 I've had many in the last month.

Amber Scribble? is she still active? It's not quite mailart, but here's some returned mail from a fictional address:

Hi William, Unfortunately not. The envelope was posted in the middle of May in hope of making the project's May 31st deadline. The change of address came out after that. The envelope made it back to me in August.

john, were you able to send it to allison's new po box?