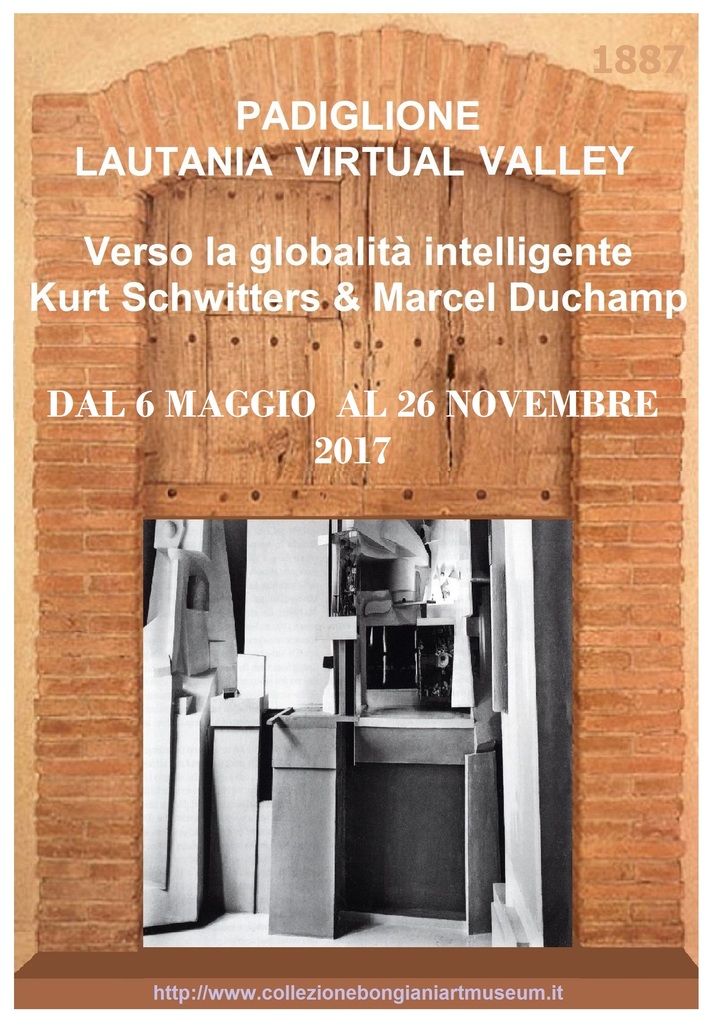 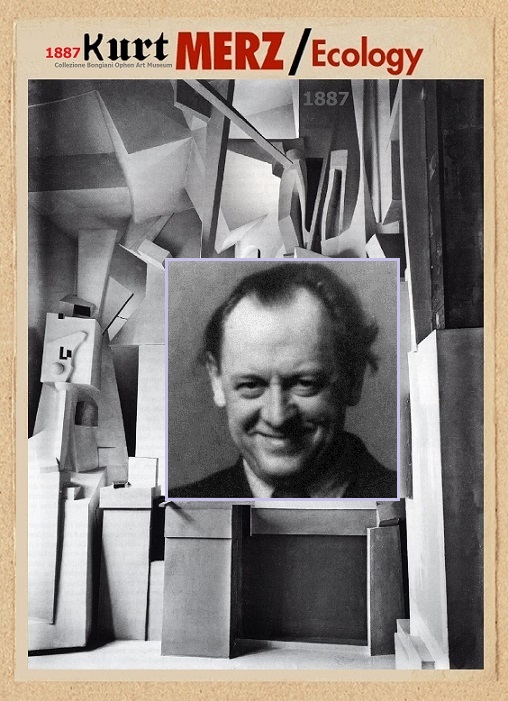 Space Ophen Virtual Art Gallery, on the occasion of the 57th Venice Biennale in 2017 intends to devote attention as an independent and contemporary event at the "Pavilion Lautania Virtual Valley", two Dadaist artists like Kurt Schwitters and Marcel Duchamp born in 1887, which beautifully summarize the survey concept understood as the privileged place to detect the dreams and utopias that in the metaphysical and mental dimension suggest worlds and collective imaginations. An invention across the board played on "possible universes" between freedom of creation and intelligent totality of making art. The Ophen space after devoting attention in 2015, at the previous Biennale di Venezia, two Japanese artists such as Shozo Shimamoto and Ryosuke Cohen, "inside and outside the body," (The World's Futures / Inside and outside the body), now it intends to investigate the work of the two artists among the Dadaists and global "Open and Closed / Closed and Open" with two respective exhibitions devoted to them to deepen what underlies the creative process. The artist's home studio, the creative dimension, time and space defines an extension to the other in the need to metabolize and transform reality.

For this first international collective dedicated to Schwitters, at the commemoration of the 130 years since the birth (Hanover, June 20, 1887 - Kendal, January 8, 1948), has been sent to several contemporary artists of the postcard with the photo of the first Merzbau for speak to the Hannover 1923 - 1943, the assembly in the artist's home, destroyed in 1943, asking them, in respect of the total art thinking Schwitters, an "add" operation great for sharing, an operation to "continue "consciously and consistently the work of Schwitters, that being a" work in progress "is not intended in any way to a possible and definitive completion. Moreover, the three Merzbau, have had the sad fate of being either been destroyed (such as the one in Hanover) or to remain unfinished because of the German artist's sudden death. This international group there are 66 works by as many important artists who wanted to share this proposal as border artists on the sidelines of a possible border and divide the official art system.

Kurt Schwitters, isolated and solitary protagonist of the German Dadaism, following a brief expressionist and cubist, he soon decided to abandon traditional ways of painting for preferring the use of poor materials in the form of collage with recovered objects of all kinds. One of his first collages carries the title of Merzbild (1919), from the fragment of the word (Com)merz that appears. The work Das Merzbild of 1919, is already an assemblage with a composition of various materials: wires and metal mesh with ropes, paper and cardboard of various type. In the central part of the work it is present in clearly marked "Merz", derived from an ad of Kommerz - und Privatebank. This work has been lost after being exposed in a derogatory manner in Nazi art exhibition and considered degenerate. The word Merz, like that of "Dada", created by chance with no meaning, will be given to all personnel becoming the sum of all subsequent German artist activities. Undoubtedly his most famous creation is an installation called Merzbau, built with found materials, called by the same artist "cathedral of erotic misery", he existed in Hanover between 1923 and 1944 before being destroyed by the bombing. Within this environment construction, the artist added slowly developing fragments of recycled things found. The work, intended as a work in progress deliberately provisional, never ended. After 1945 he settled in Ambleside and, thanks to funding from the Museum of Modern Art in New York, he could devote himself to the realization of the third Merzbau, left, after the second also unfinished due to the artist's premature death in Britain in 1948.

All of his work revolves on the concept of "total art and ecology" understood as salvaging objects put back into the environment. Hans Richter Schwitters writes: "everything that had been thrown away, everything he loved with honor is restored to life by means of his art." We consider "waste" the matter is out of its normal function and may be resumed, re-used as a source of new life, restored to a new purpose, a new creation. According Schwitters, "matter can be transformed but never removed." Everything is denial, so things must necessarily be built using the fragments of things found, not surprisingly, we can speak of "ecological thinking" .This idea will be applied at various levels and at every aspect of his work, collage, graphic, from poetry to music. The work of art is with him the vision essentially environmentally conscious art and the world, with the urgent need to recover used materials that others consider waste. At the base of this unusual poetic nothing it is discarded but recycled and put to new use. The work, therefore, as a reuse of found objects becomes the foundation of the entire activity of the German artist. To use the terminology of folk and peasant culture - in our opinion - "Schwitters uses every part of the pig" because the pig uses everything and nothing is to be thrown away, not even the bones. In the Merzbau of Hanover, the artist has entered the same ideas are the backbone of the entire production of her collages, except that unlike paper collage, he could live within the space in a sort of "three-dimensional collage" which contained neighborhoods, caves and hidden corners of memories and memory. In Merzbau of 1923, as for the area of ​​a city, the artist will distinguish different neighborhoods and villages with a "cathedral of erotic misery", sexual murder quarry "in which there was a kind of fractured female body painting red, a "great love cave" and "a cave of Goethe." Practically an unusual environmental maze, with a structure built in time to recover obscure obsessions and autobiographical memories.

It remains the complete works understood as a gloomy area of the mind, therefore, is growing dramatically as a big city and the cavities, valleys, caves must necessarily have a life, its own structure and an independent character; a cavity housing the glittering treasure of the Nibelungs, while the sex-crime cave has a horrible mutilated corpse of an unfortunate girl. The Schwitters himself describes the construction of the first Merzbau: “It grows the way a big city does…I run across something or other that looks to me as though it would be right for the KdeE, so I pick it up, take it home, and attach it and paint it, always keeping in mind the rhythm of the whole…As the structure grows bigger and bigger, valleys, hollows, caves appear, and these lead a life of their own within the over-all structure…Each of the caves or grottoes takes its character from some principle component. One holds the glittering treasure of the Nibelungs…and the Goethe grotto has one of his legs and a lot of pencils worn down to stubs…the sex-crime cave has one abominable mutilated corpse of an unfortunate girl…an exhibition of paintings and sculptures by Michelangelo and myself being viewed by one dog on a leash…a 10% disabled war veteran with his daughter, who has no head but is still well preserved…”(Schmalenbach, 132-33).

Each of the caves, then, takes its character from some parent; integrated within the structure were the twin shrines dedicated to many Dadaists friends and authors, with objects and fragments of his own body (a small bottle of urine, fingernail, broken switches, buttons, tram tickets, colored cheese labels Camembert, a cigarette butt, glasses upside down and even a lock of hair), used in the development and installation environmentally progressive growth. With this work we can no longer speak simply of sculpture, or total furniture in the style of the Bauhaus environments or those Futurist. By now, the work must expand beyond the extending part in the whole space of the room that houses it. Initially the artist Hanover began to occupy the space of his study with a first central column, then adding the other two also constructed with a secular religiosity extensively and randomly. In about twenty years of work, this particular "environment" became a kind of autobiographical self-portrait mirror and of the thoughts and social contacts with others. An intimate diary made of images, objects and space with an ongoing construction being finalized. Place concrete and livable, therefore, in which the artist deposited thoughts and their most prized possessions, the testimony truer it needed to fill the void and the distance between everyday life and art. The three-dimensional structure grew in an apparently chaotic and messy charge of particular symbolic and affective references becoming, in fact, "the ecological and global work of a lifetime", is intended to symbolically represent a holistic system, ie, a particular total conception. Certainly, in Merzbau you are content and accumulated a wide and varied range of allusions and cultural archetypes thickened in space to define a cyclical and temporal proceeding that emulates and imitates the progression of chronological life in his doing and undoing, with past submerged moments and hidden from the most recent, as in a natural geological or biological growth. The use of sophisticated holistic symbolic function by Schwitters makes Merzbau an appropriate opportunity to reflect "ecological" sense of a particular worldview and the entire ecosystem of human thought.

Rimane l’opera omnia intesa come zona cupa della mente, di conseguenza, cresce a dismisura come una  grande città e le cavità, le valli, le grotte devono avere necessariamente una vita, una struttura propria e un carattere autonomo; una cavità ospita il tesoro scintillante dei Nibelunghi, mentre la grotta sex-crimine ha un orrendo cadavere mutilato di una ragazza sfortunata.  Lo stesso Schwitters descrive la costruzione del primo Merzbau: “It grows the way a big city does…I run across something or other that looks to me as though it would be right for the KdeE, so I pick it up, take it home, and attach it and paint it, always keeping in mind the rhythm of the whole…As the structure grows bigger and bigger, valleys, hollows, caves appear, and these lead a life of their own within the over-all structure…Each of the caves or grottoes takes its character from some principle component. One holds the glittering treasure of the Nibelungs…and the Goethe grotto has one of his legs and a lot of pencils worn down to stubs…the sex-crime cave has one abominable mutilated corpse of an unfortunate girl…an exhibition of paintings and sculptures by Michelangelo and myself being viewed by one dog on a leash…a 10% disabled war veteran with his daughter, who has no head but is still well preserved…”(Schmalenbach, 132-33).