Does anyone have any stories, anecdotes, facts or anything at all on the subject of how the post office(s) and the post men and women view (or don't view) mailart. Anyone have any interesting or funny stories on this topic? I'd enjoy hearing them.

Permalink Reply by Peter Dowker on January 26, 2009 at 4:17pm
It wasn't the size. I send this size out all the time...no problem.
I'd added 7 little knobs on the surface, that's all. I guess it was the weight as you mentioned. Maybe they're under pressure these days from the higher ups to increase revenues. Who knows?
Thanks for your comments Dewi. Funny they should come today, you're next up on my mail out list! 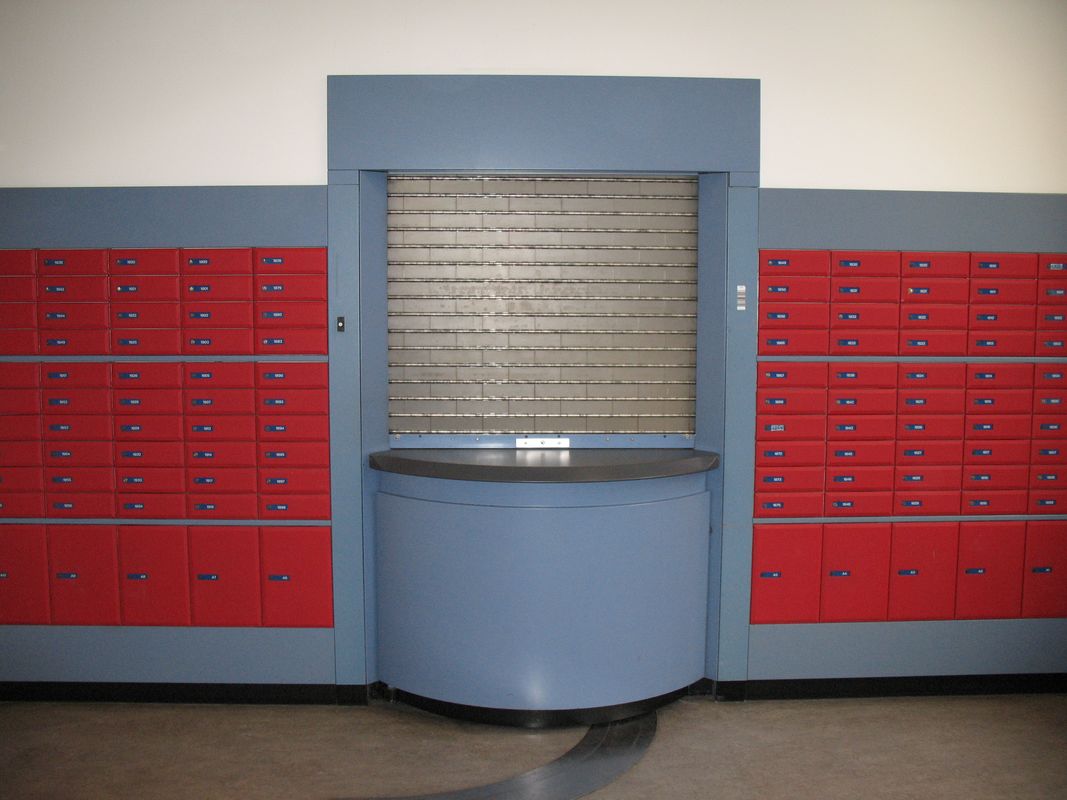 Permalink Reply by Mim Golub Scalin on January 26, 2009 at 4:43pm
Last year, we were invited to a dinner at the home of some American friends while we were staying in Paris. Another couple were there and when I heard that they worked for La Poste I surprised them by saying "J'aime La Poste." I, of course, meant mail in general, post offices in general, but it came out a bit differently in French. We had a fun conversation after that about what I meant and about mail art and they invited us to lunch with them at the main headquarters of La Poste. Since then, they've been the recipient of mail art from me and we've had the chance to meet up with them on our subsequent visit to Paris. They'd never heard of Mail Art even though La Poste had sponsored an event which included a Mail Art call in June of 2007. Never miss a chance to share the joy.

Permalink Reply by Kerry Jeffrey on March 10, 2009 at 9:16pm
As a postal employee I can tell you that most of us get a kick out of mail art. The first delivery office I worked at delivered to several galleries and it was a treat to see pieces come in. My intro to mail art was an ornately painted prosthetic leg that was with the parcels. I was sorting one morning. Each letter carrier passing by had a short story about some unique piece of art that he had seen in the mail.

Permalink Reply by Peter Dowker on March 10, 2009 at 11:38pm
Thanks for the insight Jeffery (or Kerry ?) I was hoping for this kind of input. It's great to have a USPS employee here on IUOMA. Welcome!

Permalink Reply by Kerry Jeffrey on March 11, 2009 at 12:03am
I actually did a mail art call several years ago and use the pieces when I give talks on it to our employees. This week I'm speaking to our Postal Customer Council on the subject and will be showing the amazing pieces that arrived from all over the world.

Permalink Reply by Gianni Simone on September 12, 2009 at 5:58pm
Japan is a paradise for mail artists. The postal service is fast and reliable, and the employees are knowledgeable and kind. If mail arrives postage due, they will deliver it anyway, with a note attached kindly asking you to go to the post office and pay the difference.
I usually send my stuff at a small office near my school. At any time there are six or seven people working, crammed in a relatively small space. They always look busy, weighing stuff, darting left and right, etc. When you are finished and you are about to leave the place, they say "thank you" (for using the post office) - not only the employee who has taken your mail but all of them.
Most of these people are quite young and sometimes like to push the envelope of the postal rules. One day I wanted to send copies of my zine. I had sealed the envelopes. An employee asked me what was there inside and when I told him he explained that I was supposed to leave the envelope open for inspection. However if I was sending books, I didn't have to do that. Then, to my surprise, he asked me again what I was sending. So I said, "er... books?" to which he replied, "In that case you can keep the envelopes sealed." Since then I always declare "books" every time I'm sending out zines.

Permalink Reply by Ti Ar Raden on October 9, 2009 at 12:48pm
My Postman looked totally depressed at hearing the news last year that I was entering the MailArt network. The only time I ever saw him smile was when he handed me a MA in the shape of a bottle of cider.
Last time I declined receiving a card that I had mailed to someone the day before, he said:
- You’re Ti Ar Raden, right?
- Yes, but sometimes I receive and sometimes I send. This time I sent,…
- Sigh…
Recently went to the local Post-Office with a card to that had stamps on both sides, to ensure it would be clear for everyone that there were enough stamps on the card. Besides, the recipient’s address was written on the back of the card as well as on the front, around a heart that held a crushed photocopy of a Braque painting. The lady behind the counter was panicked when she saw what I was handing her, and she started explaining to me the proper way to write a recipient’s address, whilst a younger colleague that had seen me the day before was trying to soothe her.
The MA below was mailed on Sept. 1 560 km from my home and arrived on Oct. 8 and another two from the same town are said missing : 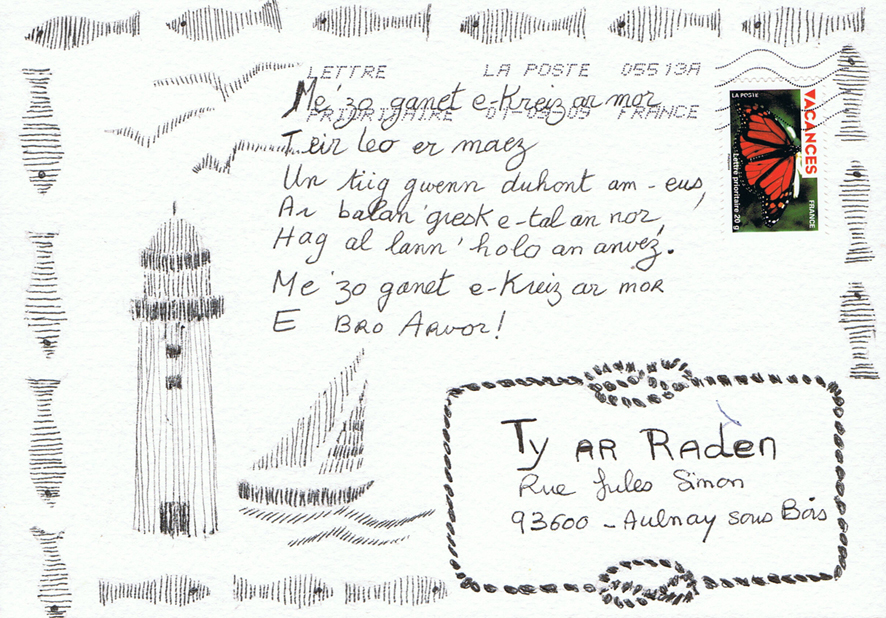 I like recycling old stamps by making cards or envelopes with them, but Postpeople hate them. Sent one to NYC in February 2008 to wish a Happy Birthday to my niece but it never reached her. 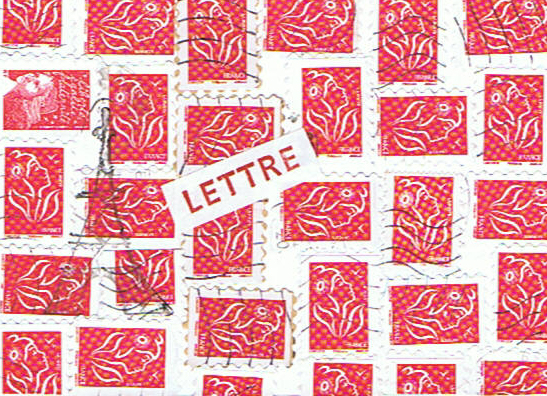 Permalink Reply by Katerina Nikoltsou (MomKat) on October 9, 2009 at 1:23pm
Been reading some of the posts about the Post. 'Wish Ti Ar and I could be in Japan! Seems that the post offices that we use are NOT mail-art-friendly. I started to place my art postcards into envelopes...(the envelopes somewhat decorated to at least be "mail art") because the postal clerks frowned upon seeing artistamps or recycled stamps or photocopied stamps along with the regular official Greek postage stamps.
They are also not too happy to see my rubber stamp "feMAIL ARTist"..."ART" being REAL "art"? So I all too often have to write on the outside of the envelopes "contents: postcards", as I am not suggling out Greek art! Fortunately the stamps for airmail, be it on a postcard or on an envelope (with contents up to 20 grams), go for the same price: 70 euro cents. Sooooooooooooo, I can get two or three art postcards sent for the price of one open postcard.
And I'll put all my artistamps and recycled stamps on the art postcards INSIDE an envelope...
"for your eyes only"!

And to crown it all, one of my MailArtists contributors lives in the same town, which means "double nuisance" within 2.5 km for the Postpersons..