August 27, 2015 - This summer I received two large packages of mail art from visual poet Jim Leftwich in Roanoke, the first of which (chronologically) I am documenting in this blog. The vast majority of the pieces are collaborations between Jim Leftwich and Evan Damerow. (The exception is one very interesting asemic work at the end.) According to Facebook, Evan Damerow resides in New Zealand. His work was unknown to me before the arrival of this missive.

While Jim Leftwich seems inclined toward the prolific naturally, I attribute some of the outpouring of work this summer to the 2015 Marginal Arts Festival. The event seems to have been a great success and a perusal of the documentation will be rewarding, no doubt:

The Anti-Brain Rot mail art call and exhibition also accompanied the festival, which occurred in July (2015). Here is some partial documentation of the entries via C. Mehrl Bennett (Columbus, Ohio, USA):

Unless otherwise indicated, all the pieces shown here are Jim Leftwich-Evan Damerow collabs.

These Leftwich-Damerow collabs hold specific interest to the trashpoets and D-Kulters in the network, as Jim Leftwich is acknowledged as having created some of the earliest Trashpo (2005). These pieces (the current work shown here) use found material, have the organic structure so recognizable in most Trashpo and also show the anti-art stance and the On the Road spontaneity of Trashpo composition.

Trashpo is a form of visual poetry. (Many current practitioners are either unaware of or disregard this fact). The pieces documented here make abundant and innovative use of text, text-image associations and juxtapositions, cut up, disruption, asemics and other approaches that are related to poetry and the poetic as well as the tenets of Trashpo rather than mere collage. In short, they are excellent examples. The work transcends Trashpo in many ways yet still offers insights into Trashpo theory and practice for the working trashpoet.

A bonus in the package is the piece below: “Spirit Writing” by Jim Leftwich (1997), a work of historical significance because it was made so early in the context of the current thriving and burgeoning asemic movement. Jim Leftwich, however, and as many know, has reservations concerning the use of the term “asemic” and having his own work labeled as asemic writing. So I encourage you to consider the perspective of visual poetry here, although I believe the tide of history is very likely to identify Jim Leftwich as an asemic writer (among other designations): 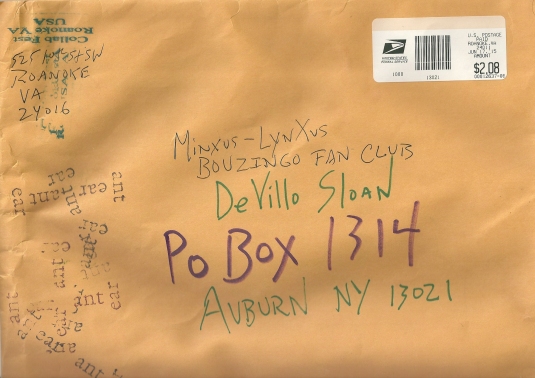 Many thanks to Jim Leftwich and Evan Damerow!

some of my earliest explorations of asemic writing were published by John Bennett in Lost and Found Times #39, in November 1997. they can be found on pages 18 and 19. a pdf is here:

the term "spirit writings" is from John. Tim Gaze and i used it for the title of my chapbook.  Ohio State has a copy in the Rare Books and Manuscripts archive, box 3, folder 42: