An artists book from FLUXRUS

As I said on the plagiarist blog, I have waited a long time for this mail to arrive which Svetlana, a Russian Fluxus artist had posted as far back as September last year.  This is her contribution to my The World is a Town call, based on the dissemination of a book I made of the same title, words of an unknown inhabitant of Novgorod which echo the plight of the post modern condition.   The original idea was based on the Novgorod Codex.  Svetlana  titled  her artists book:

The Book of Cities of the World - Venice 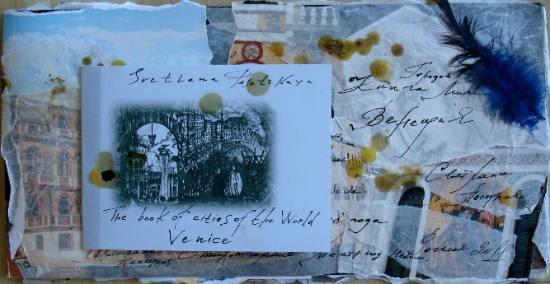 Filled with carnival feathers, photographs, collage, text and overlays, this is a joy :-)! I still have a few pieces - if anyone would like to send me something for this call - PLEASE!!!! I'd be only to happy to part with my last few remaining pieces of this book :-) 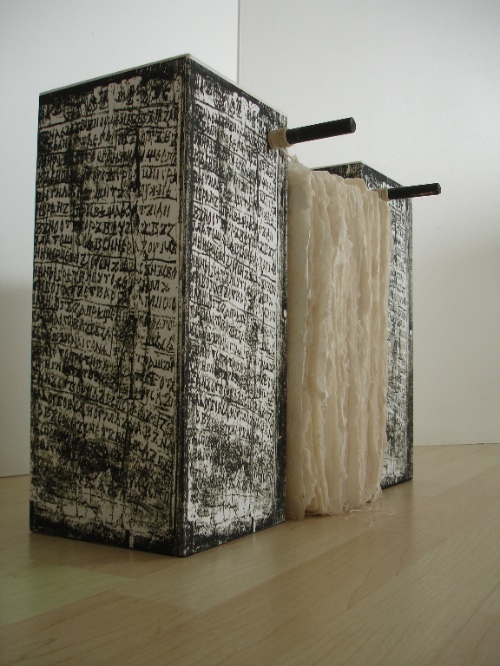 Some days - well, Overwhelmed strikes. As most of you know, The World is a Town Call is now over a year old.  I have had the MOST fantastic response for this call - and from Freider - well, its no different.  Frieder's work arrived in a purpose made wooden box. 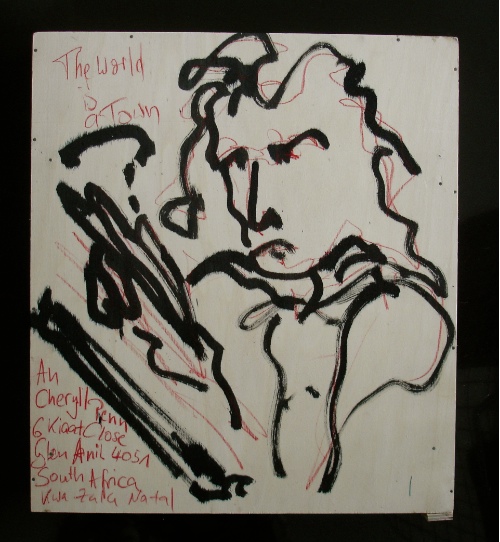 Based on the finding of the Novgorod codex in 2000 in Novgorod, the codex is thought to be one of the oldest found medieval objects of its kind.  The codex is a palimpsest  consisting of three bound wooden tablets containing four pages filled with wax.  The owner of the tablets wrote and rewrote over the ‘pages’ many texts during the course of twenty to thirty years, each time wiping out the preceding text.  Part of the discerned text reads:

The world is a town in which heretics are excluded from the church.

The world is a town in which innocent people are excluded from the church.

We are concerned with The World as a Town part, but it is interesting - as I have said before - to note the postmodern thinking of 'othering', exclusion and the concept of a global village - a world town. 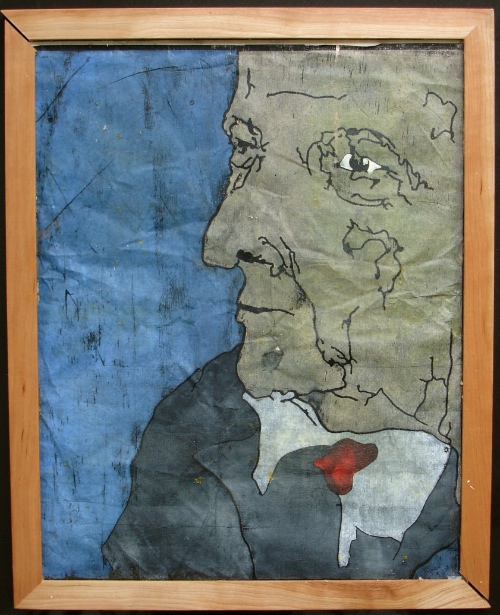 Frieder  tells me that he used wax to finish the wood surfaces.  In his first experiments, he used a lot of wax but found it dried slowly  and got very sticky.  Each of Frieder's three wooden tablets is double sided, echoing the Novgorod Codex. 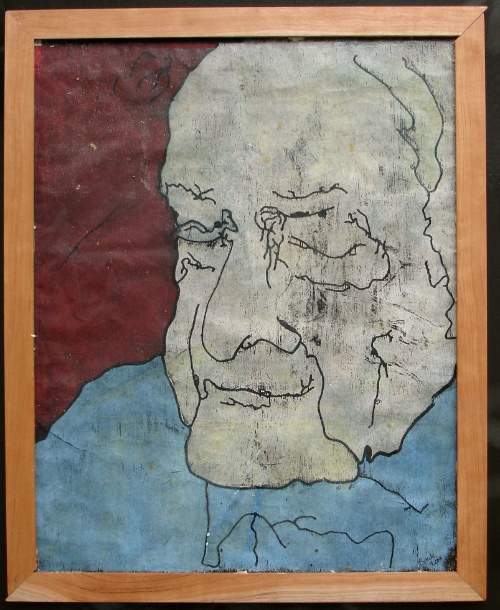 Technically Frieder's first aim was to "try to make several layers of woodcut and writings in wax over it. But some wax is not transparent enough and this one I used dried too slow and I wanted to finish it, so they got a slim wax surface where I couldn´t write on it without destroying  the prints. So it is sometimes, the idea of several layers in the beginning vanished at the end nearly completely."  The waxed prints are in are American Cherry Wood frames. "The wax of the codex itself contains psalms 75 and 76 (and a small fragment of psalm 67). This is the so-called basic text of the Novgorod Codex. Consequently, the book is alternatively known as the Novgorod Psalter. This text can be read as easily as any other document on parchment and could be examined at once. The Psalter translation exhibits a somewhat different translatory tradition than the Slavonic translations of the Psalter known so far (especially the Psalterium Sinaiticum)." - Wikipedia 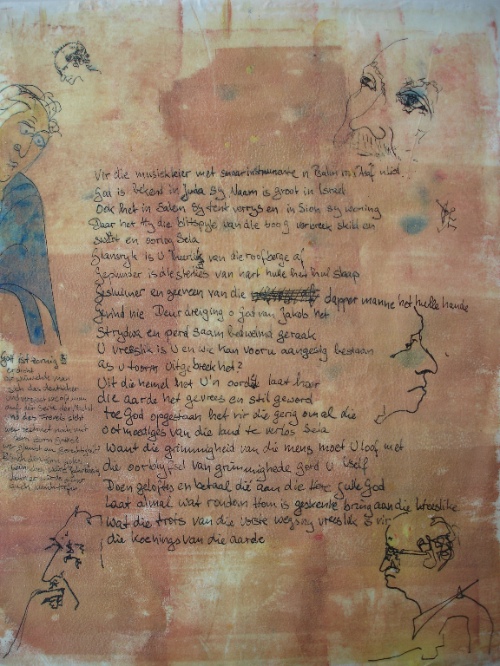 Frieder wrote the Psalms of Asaph in Afrikaans as  his codex was traveling to South Africa. 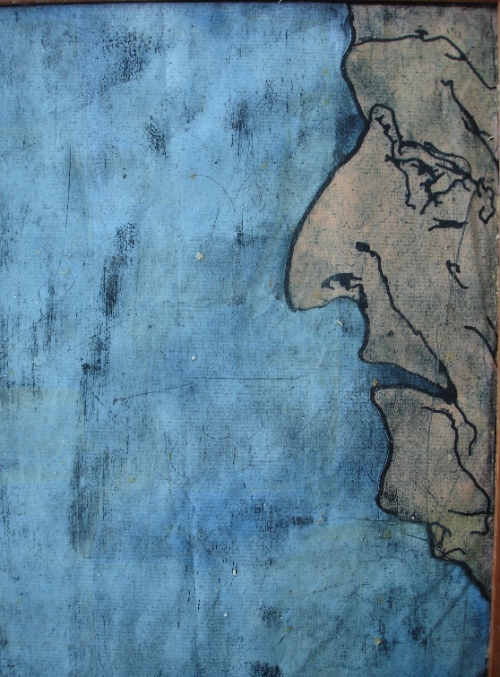 Again - what can I say? The generosity shown by artists to this project has been touching to say the least. Many thanks Frieder - these are beautiful.

Another great addition to the project :-) X

Thank you very much for the great blog and kind words, it was good fun to think about this work and to let it grow. And selfportraits? No, but maybe there is a bit of a selfportrait always within. And these woodcuts are often not to similar to that what you see and sketch. But I like that.Its always a little surprise.

Another piece of interesting information regarding the codex:

"A subsequent concealed text contains the following passage: 'The world is a town in which live the Armenians and the Africans and the Thracians and the Italians and the Spanish and the Greeks'. The sequence of nations listed is highly important, as it lists the nations in the order that was important to the writer. Zaliznyak believes that an earlier allusion to Alexander, the Areopagite of Thracia is connected to the listing of Thracians early in the list"

These are great, magnificent. Wonderful work, Frieder, and thanks Cheryl for the nicely done, informative blog. It's a good thing you didn't post these over the weekend, as they might have stopped my World...Town work in its tracks. Marie's gorgeous work back in February almost did that. :--}

Frieder, like Cheryl below, I'm wondering if a lot of your work is self-portraiture? Have always assumed that it is.

Comment by Marie Wintzer on October 31, 2011 at 11:01am
In deep reflection, yes. Not unlike Lesley's portraits.

Comment by Marie Wintzer on October 31, 2011 at 10:54am
A very happy anniversary! Beautiful work, I love the textures. And great blog! I also like the sentence "Was glauben Sie", which, if I am not mistaken is a wordplay or a reflection on Thinking / Believing (What are you thinking? / What are you believing (in)). Lucky you cp-sa!!