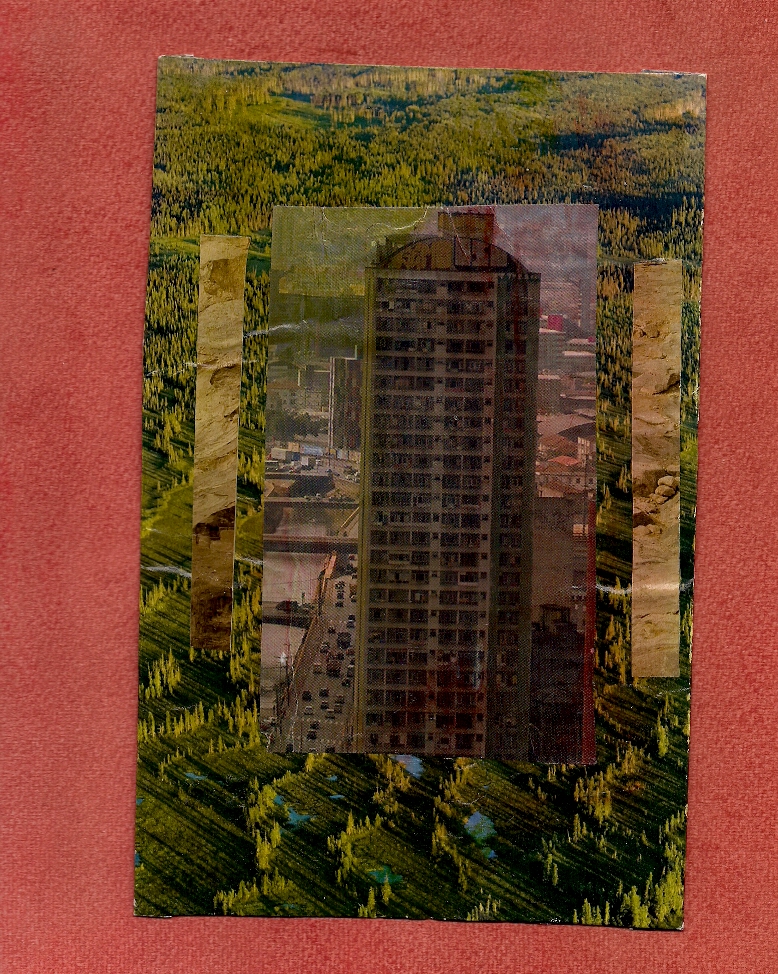 February 27, 2011 - Austin Wills James is releasing a new line of mail-art after a brief hiatus from the network. It's great to see his work again and have him back. IUOMA members who know Austin's mail-art will immediately recognize this is different from the style we've come to know. This (above) is a traditional pasted collage as opposed to much of his work that is ink and watercolor. He has always had a penchant for geometry, and that remains true in this piece.

For some reason all I can think of is the notorious Chicago housing projects ("The Projects"), but I know it could be just about any highrise anywhere. Austin Wills James is fairly unique in mail-art because he uses music as a source of inspiration. Most pieces are named from a song title. I especially enjoyed his Grateful Dead series.

Again, we have a serious shift to the Talking Heads here (see below). Austin can't make a bad choice in my book. How can you not appreciate David "I ain't got time for that now" Byrne? I confess to being a fan of bass player Tina Weymouth (anyone remember Tom Tom Club?). And, hey, Talking Heads started at the Rhode Island School of Design. Isn't this obnoxious? This is what Austin's work does to me. The reverse side excellent: An excerpt of lyrics from "Nothing but Flowers" goes a long way to explain Austin's collage:

Years ago
I was an angry young man
I'd pretend
That I was a billboard
Standing tall
By the side of the road
I fell in love
With a beautiful highway
This used to be real estate
Now it's only fields and trees
Where, where is the town
Now, it's nothing but flowers
The highways and cars
Were sacrificed for agriculture
I thought that we'd start over
But I guess I was wrong

"Even Flow" inspired by Pearl Jam (whatever happened to Eddy Vetter?): 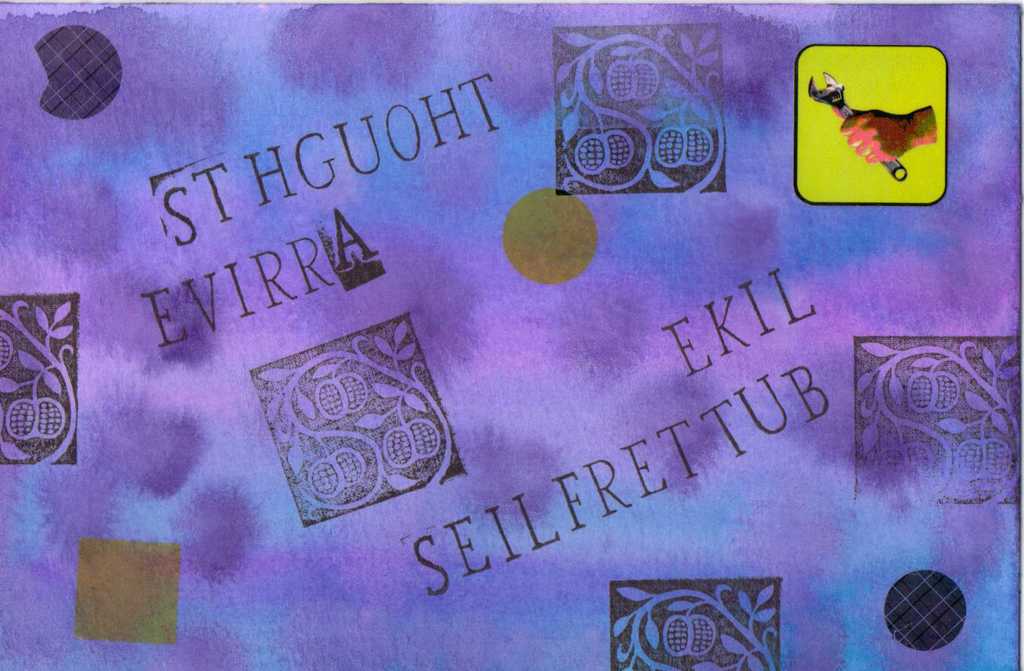 "Organic Girl" - don't know the reference but sure like the concept: 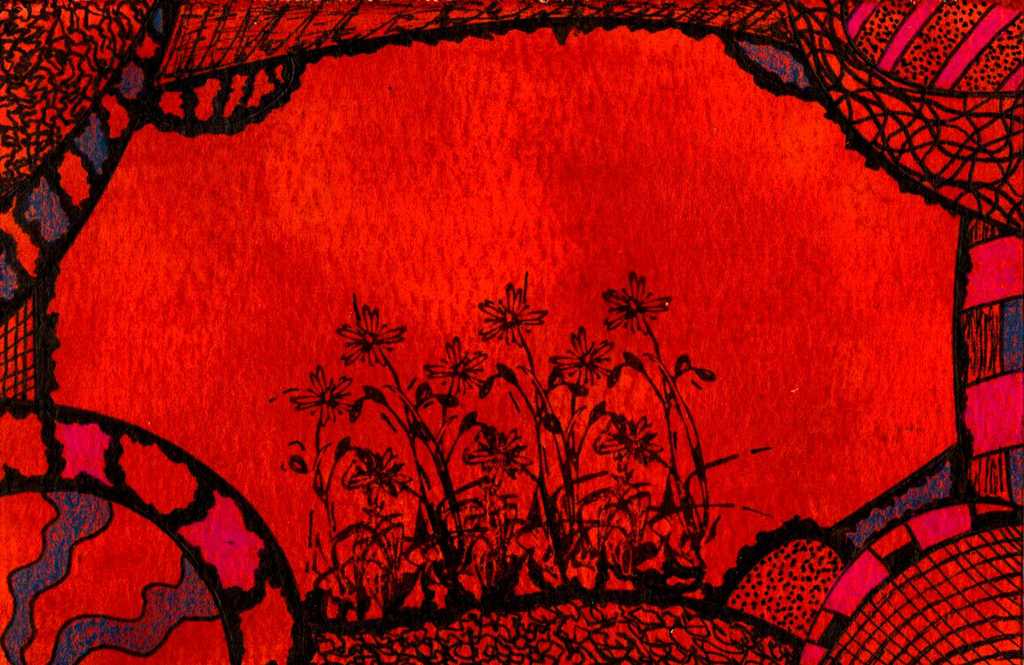 "Run Through the Jungle" - Creedence of Course 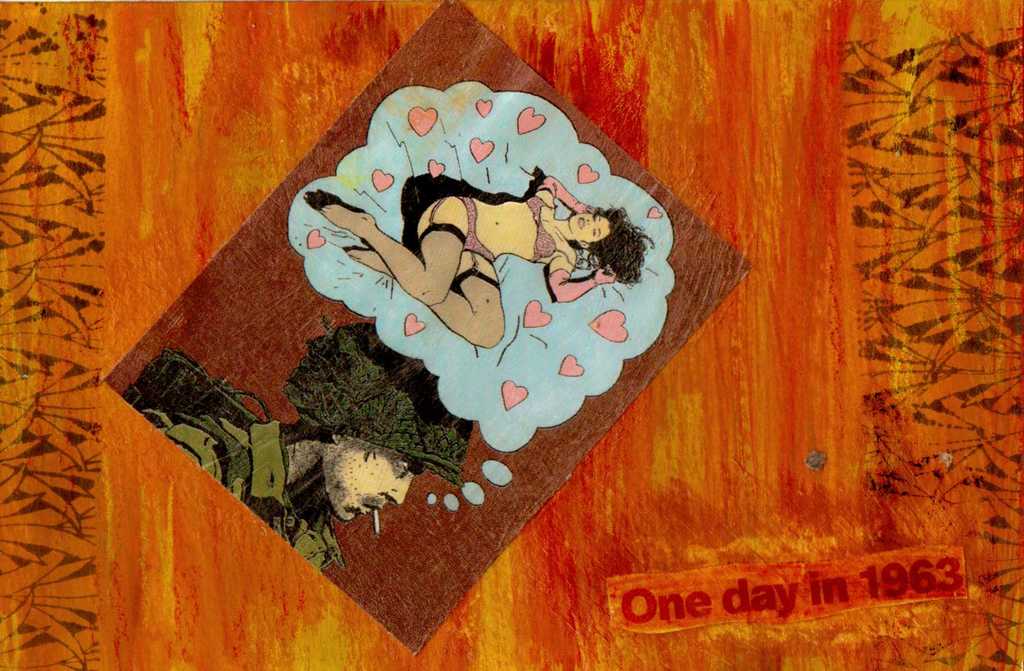 TINA WEYMOUTH TRIBUTE (Let's giver her the credit she deserves)

Tom Tom Club (sans shoes or feet for that matter): Start your own bakery. Beauty School never made anyone beautiful. The line between cosmetology and cosmology is splitting hairs. As a general rule, drink water. 34, 12, 31, 45, 6, 37

Mail-art Color of the Day: Lilac

Mail-art Quote of the Day:

From "Post-Modernism" by Jim Carroll. More evidence of Sandpo?

I gather up the giant holes.

Why should I bother with the rock

and sand which fills them?

Oh, & thanks for getting "Life During Wartime" stuck in my head on a loop, haha.

Comment by De Villo Sloan on February 28, 2011 at 1:09am
Phew, that's good news. The IUOMA portfolios are an excellent resource for looking at a body of work by one person. I thought some of the earlier pieces in yours were pretty impressive. Thanks for explaining Spidey because I couldn't figure out how you did that one. Yeah, "Run through the Jungle" is iconic for that kind of war paranoia/hallucination. Stephen King quoted from it in one of his novels seeking the same result you did. I always like that pairing of two images against each other. Great stuff.

If anything, I'm flattered that you posted some of my other pieces; giving me a chance to look at them thematically & not as individual works. Oh, by the way, that Spidey pic is actually clay scratch board that I brushed the red & blue ink onto after exposing the white clay underneath, then used a fine point Sharpie for the costume's webbing. As far as the CCR card goes, I found the two clippings while scavenging for collage bits. The two fit together so well that when I saw them next to each other, I just started singing 'Run Through the Jungle' to myself.

Thanks again for your insight, you always manage to point things out that I'm not even conscious of having done.

Comment by De Villo Sloan on February 27, 2011 at 9:53pm
Thanks, Austin. Your work makes me thank about band after band, song after song - I think you get that part too. "Nothing but Flowers" is reflected just perfectly in your art. I'm pleased to have this one. "Back Spacer" - perfect for Pearl Jam. You remind me to check out what that crew is doing. Ok - MC Xander - your taste and mine are on the same track. I'll check it out. Hope you are ok that I pulled stuff from your portfolio. I just got so used to doing it back in the day, I didn't think about it. Great to have you active again. And I'll send you that work based on Japanese psychedelic art ASAP. Thanks again!

Thank you for the kind words, I love it when someone just "get's it". I've always been partial to that particular Talking Heads tune, although 'Life During Wartime' & 'Crosseyed and Painless' are probably my favorites.

As for Eddie Vedder & the rest of Pearl Jam, their most recent album 'Back Spacer' is quite good, & has inspired quite a few pieces of MA. The backward print on "Even Flow" was intentional, I've always wondered if thoughts were projected backwards in our minds in the same way images are to our eyes.

"Organic Girl" is a tune by a British beatbox artist named MC Xander, definitely worth a YouTube search.

(Oh & not to worry, I'm still constantly finding inspiration from the Grateful Dead.)