I remember seeing Grigori's blog post about Ryosuke Cohen, and this real piece of Hollywood memorabilia making it to Brain Cell, and I found it absolutely brilliant. It is of course Grigori's hijack of the famous Daily News headline, "Actress shoots Andy Warhol". And it comes with a letter of explanation. I was quite worried for Grigori after I read this, but I hear he is recovering well and went on an ice fishing vacation, so I think all is well.
Although... I don't know how he is funding this trip with that ridiculous amount of monthly allowance from the US government. That handwritten note made me laugh out loud, and I think they should give him at least a few more bucks just for being Grigori. Thank you for sending this precious memorabilia, including the love buck and Antonio Moreno Dollars. Marie-Antonette will let the US government know that you are far from being useless :-))

---
PS: reading about Andy Warhol and the shooting, I found a rather interesting quote by him:
"Before I was shot, I always thought that I was more half-there than all-there – I always suspected that I was watching TV instead of living life. People sometimes say that the way things happen in movies is unreal, but actually it's the way things happen in life that's unreal. The movies make emotions look so strong and real, whereas when things really do happen to you, it's like watching television – you don't feel anything. Right when I was being shot and ever since, I knew that I was watching television. The channels switch, but it's all television." A new envelope from Grigori, received a few days later: 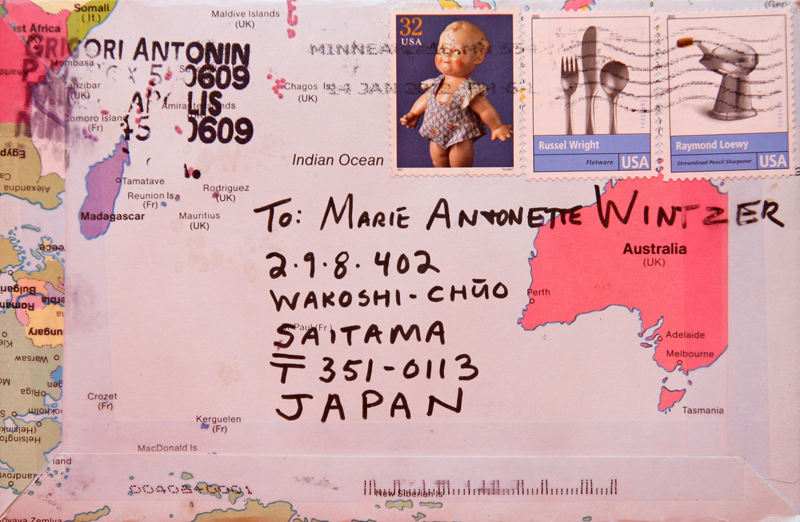 With the absolutely original newspaper cutout and absolutely true story. And the confirmation that the signed letter is by deceased actor Rock Hudson. So THAT was the memorabilia! I get it now. Highly collectable I presume. Lucky me, as usual. 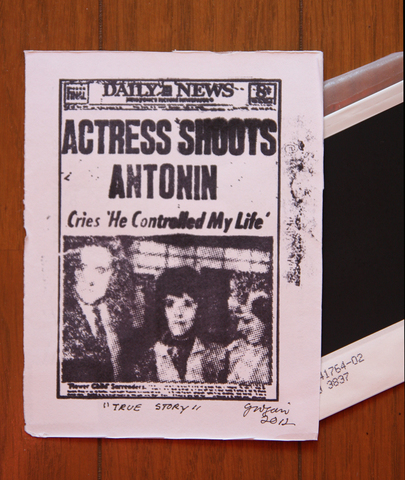 The envelope also came with a polaroid (we know Grigori excels in this exercise) of the most famous PO box in ALL of Minnesota! With proof, of course :-)) I can't really read the number of that mailbox, and that card looks, errrm, I don't know. OK, let's say I buy it. But I think this calls for a little experiment, doesn't it? In any case it made me smile, as usual, thank you Grigori! And glad to know you had a fab time with fishing and other peripheral activities :-))) Yes, it's just annoying because you know that what has been crossed out are the most important words, and you will never know. Same goes for the other half of a conversation. In the Tokyo metro it is forbidden to use your mobile phone, because it would distress people to hear only one half of the conversation, and you don't want that. This is true, btw.

Personally I love trying to read things that have been redacted, it's the visual equivelant of hearing half a conversation in a crowded cafe.

Right, he said his wounds were healing slowly. I know any hint of public attention distresses him, so I should desist. The Rock Hudson letter with blacked out passages is just too strange. I'm still puzzling.

He's right. Being near a lot of water myself - going out on a frozen lake in winter is serious business.

I'm not sure about the shooting but I do believe he won at poker. He so looks like someone who would win at poker.

Your exclusive interview with The G-Man at "Marie's Mailbox" is priceless: fishing on thin ice and Rock reaching out to The Grigster during the dark hours. "I want to believe."

The Rock Hudson thing was a big deal. And it's exactly the kind of popcult stuff that you'd associate with Warhol & Ray Johnson. But it's inexplicable - with the crossed out words, etc. I noticed there's an account of his fishing trip on his blog. He won at poker and was shot again?

The blacked out words add to the mystery of it. I thought I could read what's underneath, but it's impossible.

Yip, if I believe Google Images Rock Hudson was quite a fab. Who knew he kept so many things bottled up. At some point one reaches breaking point, and then look what happens.

Marie, I am growing more concerned with each new revelation. That letter must have been written very close to the time of Rock Hudson's tragic death. Why are lines blacked out?