(This document is always under construction. Your comments and contributions are welcome! Just leave a message/pics in the comment stream, and I will update.)

Asemic writing - A broad term encompassing text that cannot be read in any conventional sense and that is devoid of rational meaning. This includes artificial and invented languages (without signification), distorted text, unintelligible handwriting and calligraphy, and forms of cut-ups, among others. Asemic symbols appear frequently in Trashpo and have been named Trashemics.

Audible Trashpo - A form of recorded sound Trashpo created by re-assembling various audio  devices found in dumpsters or landfills, such as singing greeting cards, especially when the sound is distorted. Audible Trashpo was invented by Not Hi Ng (USA). invented by Not Hi Ng.

Bernice - First and only winner of the DK For A Day contest.

Cerealism - Trashpo made from cereal boxes. Based on wordplay with Surrealism, the practice of exchanging cereal boxes is thought to originate with Ray Johnson. Mail-artists currently associated with Cerealism are Arac (USA), Richard Canard (USA), and Katerina Nikoltous (Greece). 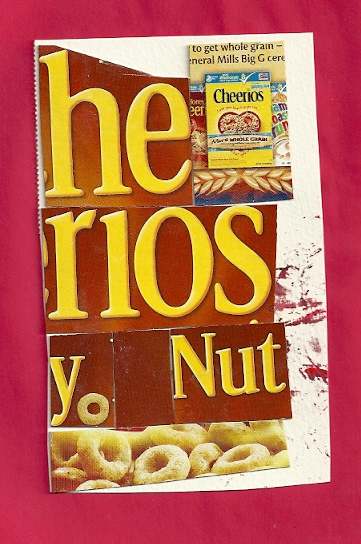 Chance operations - A variety of methods, ranging from the simple to exceedingly complex, to generate random combinations and constructs in art and writing. Some methods of Trashpo composition involve chance operations. 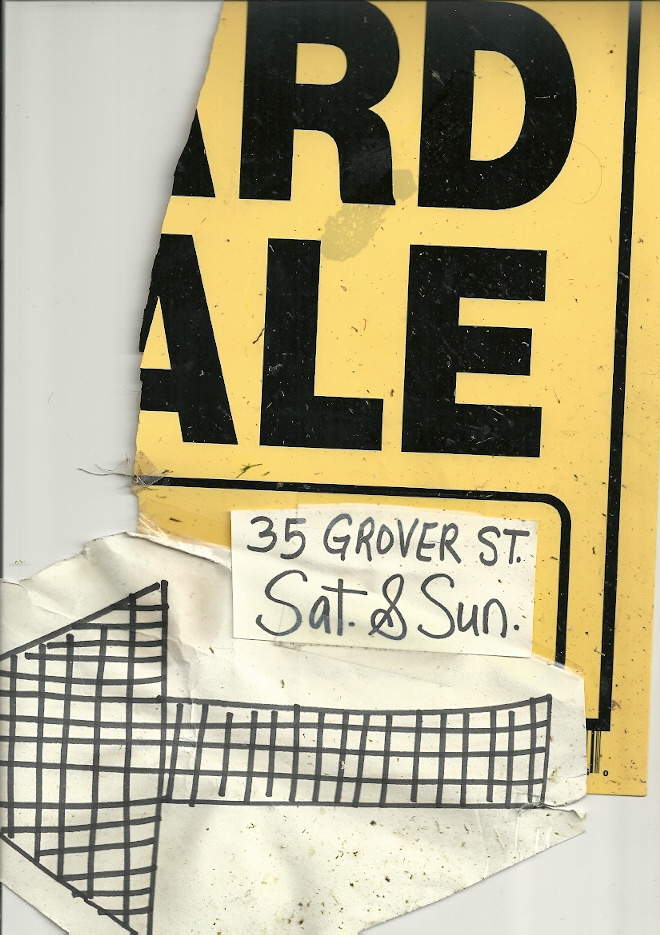 Clinic, The - A medical and psychological treatment facility located somewhere in Mexico. The Clinic might or might not be currently associated with DKULT or it might have been in the past but is no longer. The Elgin Shroud was alleged to have been kept at the The Clinic when it was smuggled out of the United States. Evidence suggests Tinkler spent time at The Clinic before the Dead Cat Performance during the First International Trashpo Exhibition. Claims have been made that The Clinic is (1) David Zack's Immortality Center or (2) The Neoist Research Center or (3) a T.O.X.I.S. research facility. secrecy of THE COMMITTEE

Cut-ups - Similar to Da Da experiments, author William S. Burroughs and others (Brion Gysin and Harold Norse) a simple method for dis-assembling and re-combining text in a randomized form believed (by Burroughs) to reveal deeper truths hidden within linear narratives and socially mediated discourse. Cut-up variants are used often in mail-art and can also be thought of as word collage.

DharmDaDa - Originally coined by Erni Baer (Germany), DharmaDaDa is now applied to the name of an artist who believes Trashpo is a deeply spiritual activity. Trashpo DharmaDaDas are Erni Baer, Neil Gordon, and Lynn Radford.

DharmaDaDa Erni Baer - An artist in Hamburg, Germany, whose Dada-Beat Generation art serves as a foundation for contemporary Trashpo. DharmaDaDa Lynn Radford - Following a conversion to Trashpo through contact with an Elgin Shroud Shred, Lynn Radford's current work is exploring the spiritual aspects of gathering trash material for art, composition, and sharing with others. She is the first femail DharmaDaDa.

DharmaDaDa Neil Gordon - Currently offical DKult Chaplin, Neil Gordon's early Trashpo appeares to be  crudely made religious objects and tablets and scrolls with asemic writing, associated by some with Punk and anti-art. After discipleship with Diane Keys and Erni Baer, Gordon said the purpose of his art and his role to create harmony in the DKult and serve others was clarified.

DK - Diane Keys (Elgin, Illinois, USA) (aka Queen of Trash) whose work with collage, painting, roadkill, and junk serves as the foundation for current Trashpo practice. D-Kanines - Established to entice pet owners to enroll their dogs as well as themselves in DKult. Despite the endorsement of Snooky the Amazing Mail-Art Dog, the effort has attracted little interest.

DK For A Day - A contest where the winner spends a day with DK and KDJ at the Elgin Mansion. Bernice was the first winner and then the contest was cancelled.

D-Khaos - Term used to describe the total absence of form or structure in some, especially early Trashpo work, by Diane Keys.

D-Koder Ring - Early Dkult members were promised a ring would be mailed to them that would enable them to read secret messages encoded in mail-art. Rings were recalled and re-issued due to alleged defects, yet authentic D-Koder rings are extremely rare. D-Kollectibles - A branch of DKULTNY that distributes Dkult and Trashpo memorabilia and marketing items. D-Kollectibles estimates 17 individuals are currently impersonating DK and circulating fake DKult material in the mail-art network.

D-Komposition - Critical term to define the temporal nature of Diane Key's work and by extension Trashpo.

D-Konomy - A utopian scheme for the creation of a sustainable economy based on recycling and barter. Trash Dollars (aka Trash Dolls) are part of

D-Konversion - When an artist has a visionary, spirtual revelation that Trashpo is a way of both life and art. Most who have had a D-Konversion become active in the D-Kult.

DKULT Chapters - DKULT is organized by recognized chapters in locations across the globe. A chapter consists of one or more trashpoets officially recognized by the Elgin Mansion in Illinois, USA. Most chapters have a president. Official DKULT chapters as of 2014 are:

DKULT - An organization of artists, writers, and networkers interested in all aspects of Trashpo. Not all artists who make Trashpo are in the DKult, and Dkult promotes Trashpo regardless of individual affiliations. 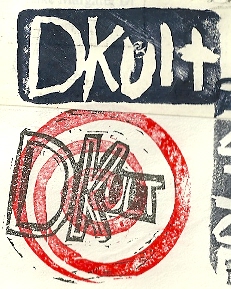 DK-ULTRA - A secret, extremist organization alleged to exist inside the DKult. No tangible proof of DK-Ultra's existence has yet been discovered and it remains a conspiracy theory. D-Tat - A tattoo for Dkult members designed by Skybridge Studios (USA) based on a Ray Johnson bunny stamp.

Elgin Mansion - Home of Diane Keys and the headquarters of Trashpo.

Elgin Shroud - A shirt owned by Diane Keys that was alleged to have been removed from the Elgin Mansion in March of 2011 by Mr. Stubbs and Ramone. In Mexico, they claimed the shirt - now called a shroud - had miraculous powers.

Elgin Shroud Shred - Various pieces of cloth circulating through the mail-art network alleged to be original pieces of Diane Keys' shirt. DKULTNY (DKult-New York) is the point of origin for most shroud shreds. Grigori Antonin - (aka G-Man, The Grigster) A mail-artist from Minnesota, USA who holds the distinction of being the first mail-artist to have his nomination for a TrashPo Litzer Prize contested by members of THE COMMITTEE. Ultimately, he was awarded the prize. Antonin was briefly a disciple of DharmaDada Erni Baer. Grigori Antonin is believed to have been disfigured and became mentally deranged when he was attacked by monkeys. He is believed to have founded T.O.X.I.S.

Jim Leftwich - Visual poet (Virginia, USA) who invented Trashpo in 2005 as it is practiced in the mail-art network today.

Junk Mail Revolution - A pre-Trashpo movement started by Diane Keys urging artists to recycle junk mail into mail-art. This seems to have been successfully subsumed into the framework of Trashpo.

KDJ - A mail-artist from Orlando, Florida, USA who has held high positions - including controller - of DKult. She is known for her whacky exploits. 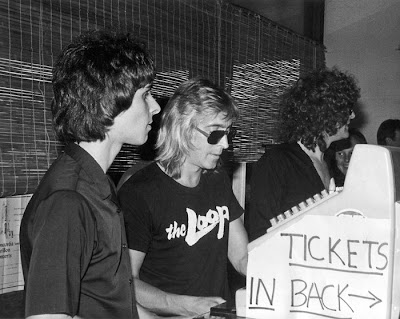 MinXus-Lynxus - A mail-art movement created by Empress Marie Antonette that is always the opposite of whatever Trashpo is.

Mr. Stubbs - A performing pig who accomapnied DK on tours and was said to have stolen the Elgin Shroud and smuggled it into Mexico. Mr. Stubbs' faithful companion is a man named (Uncle) Ramone.

Naughty List Bitches (NLB) - A feminist punk shredder band believed to be the first and only manifestation of Trashpo music. Members used pseudonyms but are believed to have been DK, KDJ, Vizma Bruns and Indiana Rogers (Fake Fine Art). NLB was active in 2013-14 but only released 20 seconds of recorded music before breaking up in a bitter dispute.

Neil Gordon - (aka Dharma DaDa Neil Gordon) is a U.S.A. mail-artist who serves as the DKult's chaplin.

Ninth Consciousness - Thought to be a heightened state of being achieved by integrating Trashpo and life. See DharmaDaDa Erni Baer.

Ray Johnson - US artist considered to be the founder of the mail-art movement. The D-Tat was designed by Johnson and Skybridge Studios.

Richard Canard - Legendary mail-art from Illinois, USA  known as both a proponent and critic of Cerealism.

Scannerbed Composition - Method for creating Trashpo by dumping trash on a scanner and copying. 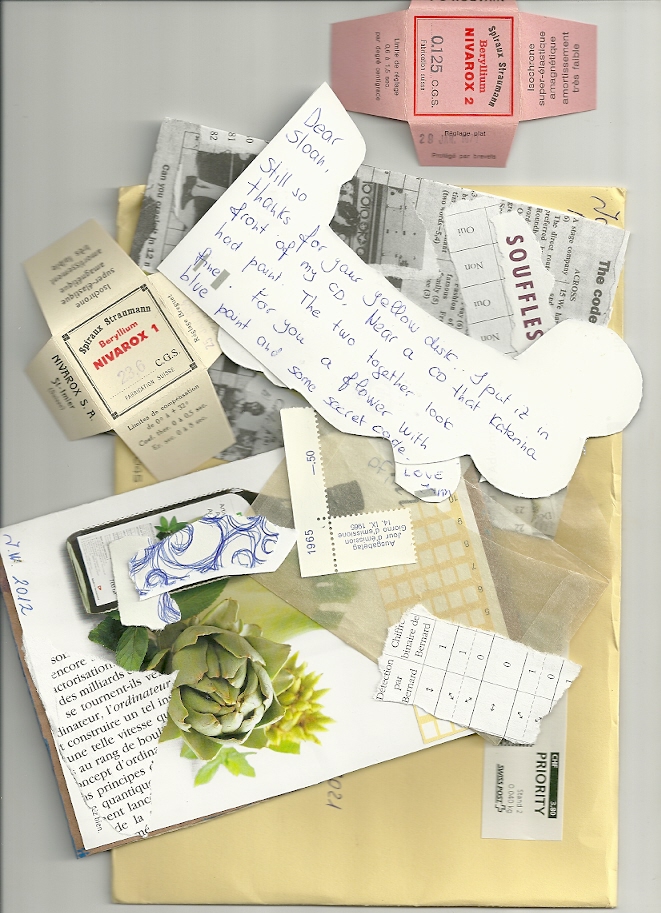 Skybridge Studios - An Indiana, USA mail-artist who designed the D-Tat with Ray Johnson.

T.O.X.I.S. - A diabolic organization believed to have been established by Grigori Antonin after he was attacked by monkeys and became deranged. T.O.X.I.S. seeks the annihilaation of DKULT, Trashpo and MinXus-Lynxus. 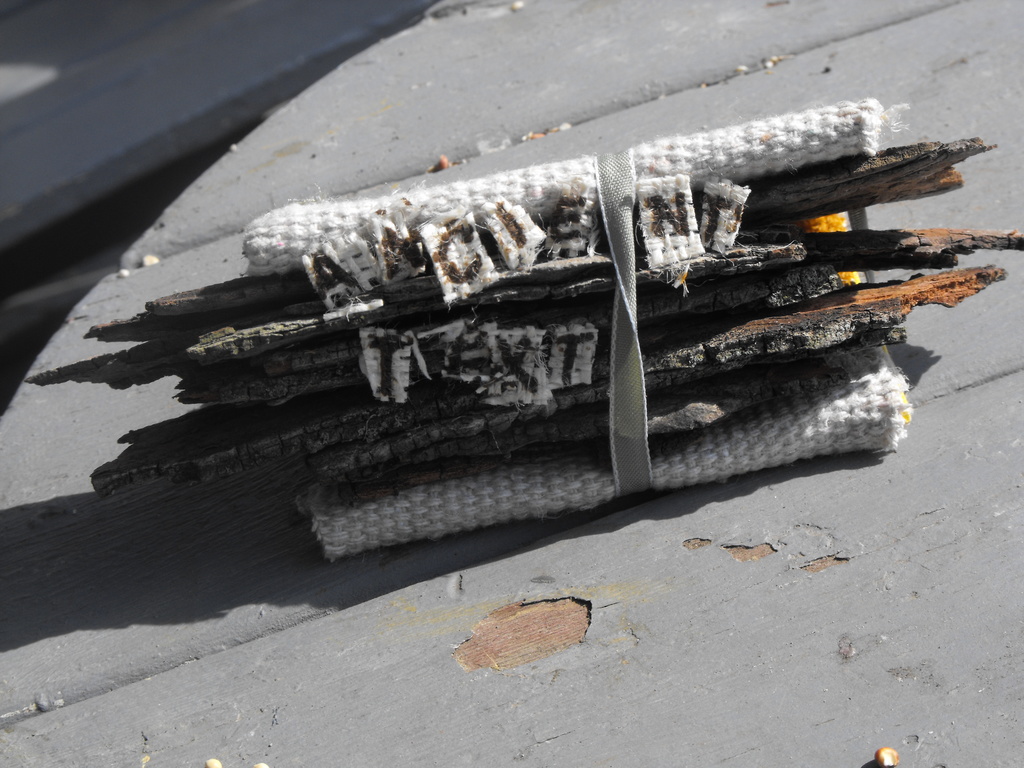 Trashion - (1) Anti-commercial or anti-commodification stance taken by Trashpo or (2) constructing clothing and shoes from trash.

Trashpo (Trash Poetry) - In 2005, U.S.A. visual poet Jim Leftwich posted photos on the internet of wastebasket material that appeared to have been randomly dumped on a scanner bed and then copied. The trash had ripped, printed letters and words that when combined formed a text similar to DaDaist poetry.

Thus, Trashpo is a form of visual poetry based on chance operations and anti-art, although its recent popularity in the international mail-art network has produced numerous hybrids (and mutations) that have evolved from the Leftwich originals.

Examples of Leftwich's Trashpo appeared on Fluxlist Europe in 2007 and their originality was noted by Ruud Janssen in the comment stream, but the impact of Trashpo's first wave is unknown.

U.S. writer and artist Lannie Quarles used the term trashpo as early as 2003 as a title for a series of journals he kept, but the content does not appear to resemble the later Leftwich work.

TrashPo Litzer Prize- Anyone can nominate someone, including themselves, to receive this award for excellence and innovation in Trashpo. All awards, however, must be approved by THE COMMITTEE, a panel of experts whose identities are a secret. KDJ oversees these awards. Recipients of the award are recorded in the Landfill of Fame.

Sloan, De Villo--Off Scene Akademie Funk King of the Universe and BeYond

yes yes! Can't believe I missed that. Kat is doing an amazing job with DKult GR. She looks after the shaman Dkult Kats as well as cooking the vegan meals--rice and crackers!

This is just so phenomenal, but I think Snooky needs to be credited for inventing the DKult Personality Modulation Machine. I think he's trademarked it, but has been seen howling to get the word out

Thank you Bifidus but "If nominated I will not accept; if elected I will not serve" (LBJPO). I am only a Holy Vessel of the tangerine cosmic meatwheel vision.

Katerina & DK, thanks for the material. I've added it to the guide. Keep it coming!

wow, you really put a lot of work into this, too bad the D-Kanines never took hold , I was about to grab my cats, shave their bellies to disguise as dogs (just kidding).  Oh, and your trash pro is in the mail on Monday 7/23, 'postage paid' Thanks, Jane. The TrashPo Litzer Prize Landfill of Fame reveals a lot as well.

This was a really active group when Diane Keys held court here every day. But she favors the FB Trashpo group now. And the Kulters follow.

But a lot of Trashpo here.

Diane and Jim Leftwich have been supposedly working on the Trashpo Bible but I haven't seen it.

Jane, I added DKULTMINN here and on the Landfill of Fame (which is a more accurate list).