Yesterday I was floating around the Record Store Day website looking for limited releases coming out on that day. At the bottom of the page I noticed a trailer for a movie about independent British record stores. As I watched all of the talking heads flash on the screen, Johnny Marr appeared. On his jacket he had a button, and on that jacket was a Ray Johnson bunny pin.

I wasn't sure what to make of this? Is he a fan of mail-art, does he do mail-art, or is he just that cool?

You can see the pin at 2:19 in the trailer for the documentary Last Shop Standing

I don't know. But his new album Messenger is pretty catchy!

Jon, I know for sure there was a lot of cross over between mail-artists in Seattle in the 80s and the musicians who became Grunge. Maybe there were similar connections other places.

Otherwise, Ray Johnson is pretty well known. There have been lots of shows in the last few years.

@ Kerri - I haven't heard the record yet, but I have seen it on the record store shelves. Never really been a Smiths fan, but that's probably due to the general issues I have with Morrisey, but oh well.

@ DeVillo - Although there have been a few shows recently, Johnson still seems to be a guy on the margins. I guess Marr's just on it?

Also De Villo, I was wathing that documentary on Gensis O-Pioridge and she / he had a box in one of the shots marked "mail-art." Do you know if Genesis sends things out or...

oh Jon. How Soon is Now I am not your friend.

Sure, I mean...yeah, it's just one of those bands that I could never really get into. Too many friends have yelled at me for this.

Jon, I only know of Genesis O. Pioridge because I saw Throbbing Gristle used Blaster Al's words as lyrics for "Hamburger Lady" song. Looks like someone who was involved in Neoism & thus mail-art. If you can get an address, I'll bet you get a response.

Istvan Kantor (aka Monty Cantsin, aka The Hungarian Bob Dylan) is still active doing music & performance in Toronto (?). Lots on Youtube. I'll bet you get lots of good stuff if you mailed him. I questioned him for the David Zack investigation. Seems accessible.

I guess I need to do a little searching with Genesis. I'm sure the response would be something impressive.

did you ever find an address, jon?

i don't think gen does much mail art any more, but there is a great book out there that collects clippings & ephemera from the coum transmissions years (immediately preceding throbbing gristle) when gen, cosey & friends were sending mail art that was often explicit. gen subsequently got in trouble with the law and was put on trial. the book contains interesting letters from burroughs, etc vouching for p-orridge, photos, facsimiles of the postcards, etc. obviously, the book itself has some adult content. it's a really important record of censorship and suppression, and a fascinating strand of mail art / fluxus history. 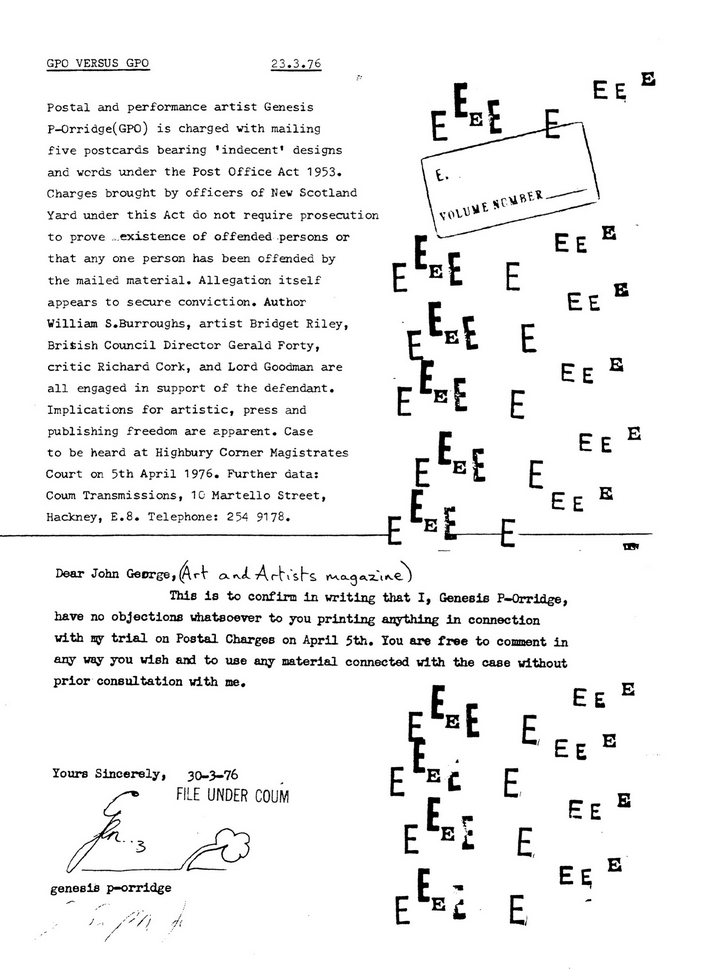 G.P.O. versus G.P-O: a chronicle of mail art on trial is a publication of Genesis P-Orridge’s collection of materials surrounding Great Britain’s General Post Office’s case against him for disseminating pornographic material through the mail in 1975. These postcards incorporated confrontational images with images of the Queen. When the Post Office made their case against P-Orridge, it became an opportunity to turn the case into another performance.G.P.O. versus G.P-O collects ephemera, legal documents, correspondence, and articles about the case and mail art. Genesis P-Orridge is an artist, musician and performer who founded the performance group, COUM Transmissions in 1969. They were active until 1976 when they mounted their controversial exhibition, Prostitution, at the Institute of Contemporary Art in London. G.P.O vs. G.P-O is a reprint of Ecart Publications’ 1976 edition.

my partner gave the book to me as a birthday gift last year and it is fascinating, though it is indeed all primary information - it helps to know the context of coum / tg and other things genesis has done. i read 'wreckers of civilisation', a pretty definitive book on coum transmissions / throbbing gristle right afterwards, and the 'mail action' booklet was a really important companion to that. (more on this book: http://www.blackdogonline.com/music/wreckers-of-civilisation.html) i admit it also helps to be familiar with some of gen's idiosyncrasies while writing ('i' is always replaced by 'e', 'but' with 'butter', etc)

i read (probably in simon ford's book about coum/tg, but i read a few books about them over the summer) that gen stopped producing mail art around the time throbbing gristle formed, because they felt that mail art was exhausted and that more ground could be covered by exploring these sound experiements - my understanding is that they never really went back to it in a major way, though i think i've seen a few '90s/'00s postcards that they have made online (post-surgery/meeting lady jaye, as they reference that) and sent to friends. please correct me if i'm wrong and anyone knows for sure!

it could be argued that gen's next band, psychic tv and the religion they formed (thee temple ov psychick youth), was involved in mail art activities via their work with sigils though i've never seen them referred to as such by anyone related to ptv/topy.

and i am dying to know what's in those boxes in gen's archives!!! i flipped my proverbial wig when i saw that in the 'ballad of genesis & lady jaye' documentary. wouldn't it be something to be able to see that? i hope genesis can find a place someday to accept what remains of their archives (a lot of things were destroyed in a raid on their home in the early 1990s).

hope this isn't redundant info, and sorry for resurrecting such an old thread! gen and all parties associated with throbbing gristle fascinate me.

Great info, allison. There was a search for genesis a few years back related to this discussion. At the time, genesis was located in the NYC area. I'm not sure if anyone ultimately mailed anything.

I agree genesis left the network long ago but stayed involved longer than your estimates,I think. Some of the Neoists still at IUOMA were involved w/ on various levels. Blaster Al (sadly deceased) wrote a Throbbing Gristle song.

I did not know about the WS Burroughs connection until recently. G sent WSB a letter saying basically: "Stop using my name in public to advance your career." Burroughs found that hysterical, wanted to meet g and so it began.

thank you, de villo!!! i didn't know that blaster al penned 'hamburger lady', wow... that's fascinating! there are so many bits and pieces to learn.... so many intersections. it amazes me.

it wouldn't surprise me at all to learn that gen stayed connected / involved longer than the cutoff suggested in the reading i've done (seems there is a pattern of gbp-o making inflammatory/absolute proclamations, only to find themselves moving around it/with it later, doesn't it :))

i had been a casual throbbing gristle fan since my late teens but the mail art connection is what really got me interested in them again. receiving the mail action book sort of sent me down the rabbit hole in a bigger way and i spent the latter half of 2014 reading everything i could find that was written by or about any of the members, etc. (i spent the first half doing that with cabaret voltaire. 2014 was an odd year). gen seemed to pop up everywhere for me around that time (like one day i was home sick from work, watching the show 'oddities' on netflix and working on mail art, and there's gen, trying to sell this shop in nyc a tibetan bone flute used on ptv albums. another day, i was visiting my friend at the tattoo shop where he works, browsing his books, and found the re/search 'modern primitives' book that profiles gen & former wife paula quite extensively).

perhaps we should search anew, i would love to be able to send genesis something. i believe they are still in new york, but have been traveling pretty extensively due to a new project they've been working on, 'bight of the twin'.

This was a fascinating thing: The m-a network of the 80s and 90s was an important (underground) conduit for a lot of bands and music that later became popular and influential. You have to consider tape circulation and music fanzines merged into the m-a network along w/ all kinds of experimental art. Industrial music came out of the network as did what later was called alternative and grunge.

So Throbbing Gristle, Psychic TV and others owe a great deal to pre-internet m-a. They were blocked from the mainstream but managed to build very large audiences.