Well, know we've got the song out of the way, we can move on to the ar which, of course, I'd like to share with you.

And so (drum roll...) Here is the Tulips Great Big Collage: 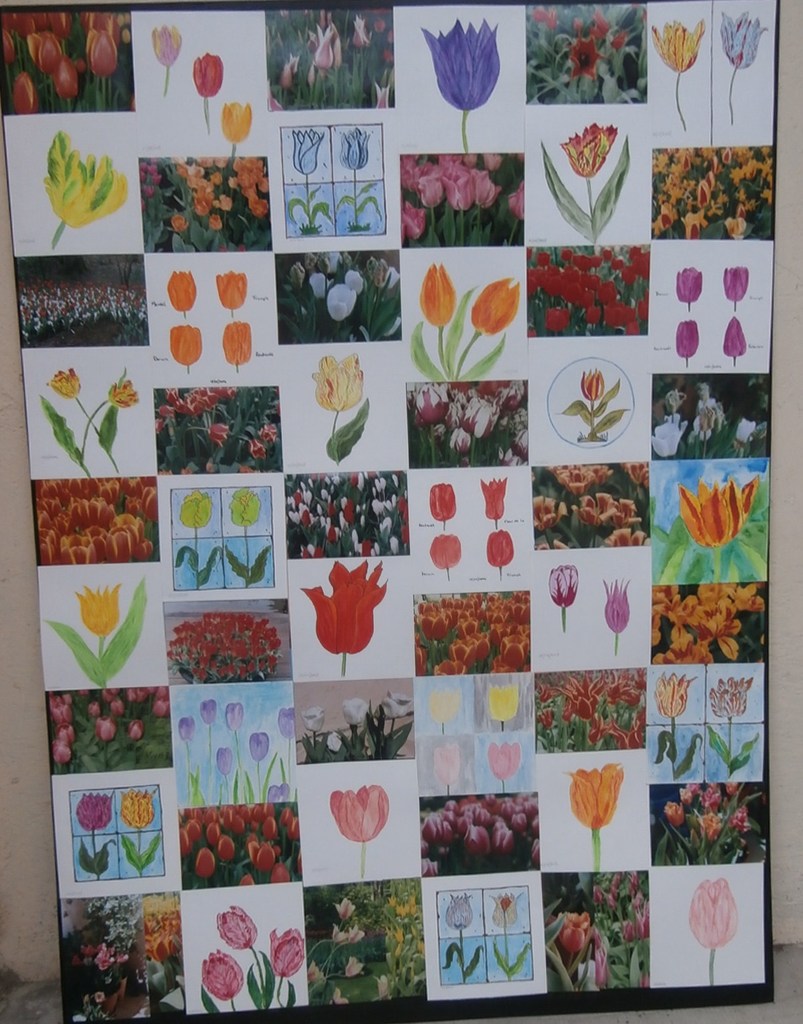 You'll see that it's made up of photos of tulips -- not from Amsterdam, but from the tulip 'capital' of the Netherlands, Keukenhof -- and paintings of tulips that were 'Made in Sigean'.

Here's some details of the collage: 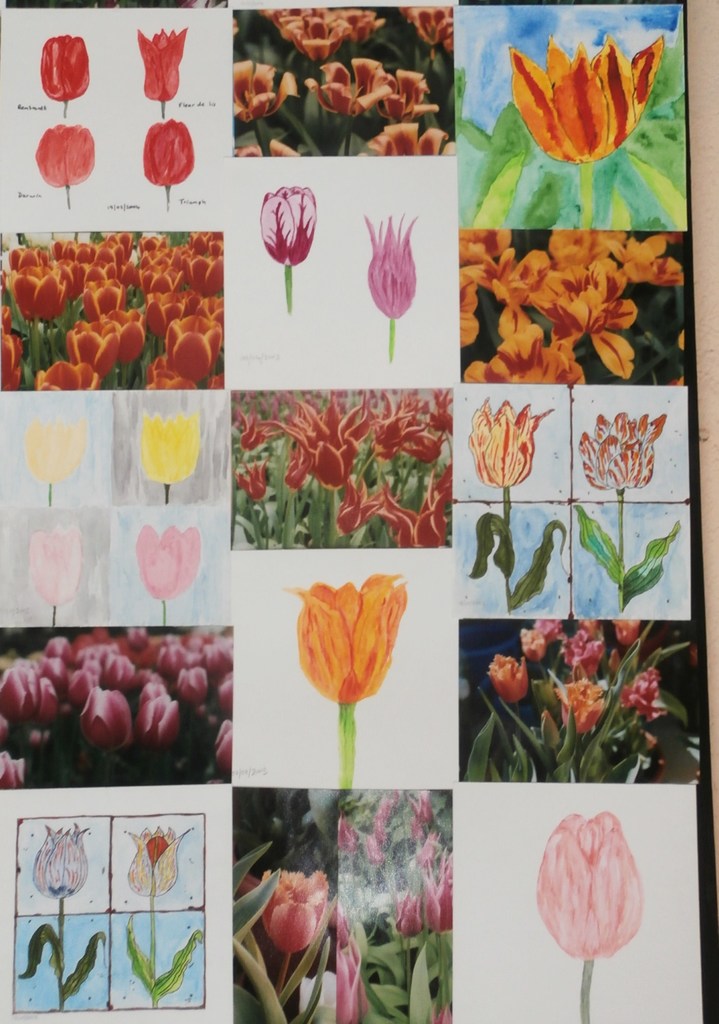 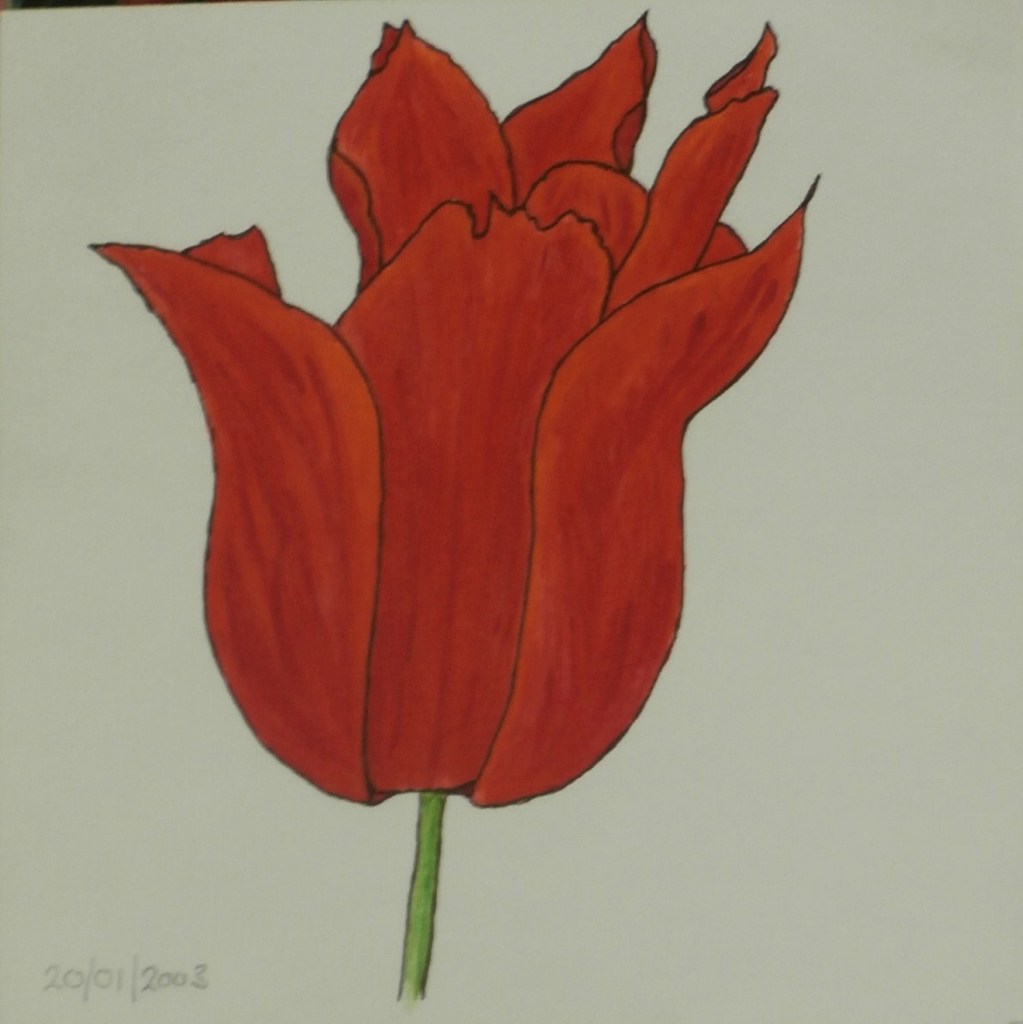 And now for the (bad) joke:

A man asked his son what he would like for his forthcoming sixth birthday. The son said he wanted a hamster so the man visited the local pet shop. There he found the perfect hamster who was in the peak of health so he bought it. He also bought a cage with a wheel and a water bottle. As he was leaving the store owner said "Any problems what-so-ever, just come back here. I live right above the shop and I'll help you out any time you want."
The man put the hamster and cage in his car and drove home. He left them in there until his son had gone to bed so that he wouldn't see them when he brought them in. Next morning is the son's birthday so the man gets up early to wrap the other presents and to check on the hamster. He is horrified to see that the hamster is lying dead in the bottom of the cage with it's legs in the air! He realises that his son will be distraught as he's talked about nothing else for weeks! Quickly he pulled on his coat and drove round to the pet shop and knocked on the owner's door. He explains the problem and the owner is quite understanding and gives the man a new hamster, refusing to take any payment for it.
The man then says "What can I do with the old one? I don't want to bury it as the cat may dig it up and I don't want to throw it away in case my son sees it in the bin".
The pet-shop owner replies "What I do is mix up a strong sugar solution - about 1.5kg of sugar and 2 litres of water, bring it to the boil and then add the hamster and simmer for about two hours, stirring periodically. It makes quite a nice jam."
The man says thank you and that he will try the rather strange recipe and then dashes home with the new hamster. He gives the new hamster to his son who is thrilled with it and promptly goes off to play with it. The man then decides to try the pet-shop owner's recipe so goes to the supermarket to get some sugar, then gets the largest saucepan he has and starts cooking. After two hours, the mixture has become jam-like so the man decides to try it. He gets a slice of bread and smears a layer on and takes a bite. And it is (not unsuprisingly) absolutely revolting! In disgust he throws the rest of the mixture out of the window, all over his garden, and does his best to forget about the whole thing.
But after a few days he notices that daffodils are springing up all over his lawn. He is at a loss to explain it as he's never had any in his garden before! Next day, his son asks him to take him to the pet-shop as he wants to get some more food for the hamster so the man agrees. Whilst his son is looking around at the other animals, the pet-shop owner, recognising the man, comes over to talk to him.
"So", he said, "did you try that recipe I gave you?"
"Yes, but it tasted disgusting so I threw it out the window. Odd thing is, where is landed I've got daffodils growing!"
"Daffodils?" asked the store owner, "Are you sure? You usually get tulips from hamster-jam"

Sorry about that, folks!

Copyright of the photos and paintings -- moi.

Copyright of the lyrics -- someone else (Max Bygraves?)

Copyright of the joke -- another someone else.

(the collage, not too sure about the joke?)