May 23 2012 - In this third anthology blog documenting chapters from the collaborative visual poetry book project headquartered at the IUOMA, I begin by returning to Cheryl Penn's contribution to the first edition, which I never posted until now. For me, this is a stunning chapter showing Cheryl at her best when using a structural, as opposed to organic, approach to visual poetry: Cheryl based her chapter on the work of the Italian architect/artist Antonio Sant'Elia (1888-1916). Sant'Elia was active in Futurism and issued the manifesto "Futurist Architecture" in 1914.

Futurism is an "ism" we do not look to in mail-art lineage very often, but it has definitely had an impact and is worthy of exploration if you are not familiar. Sant' Elia had a vision for the "New City" that he thought would emerge in the 2oth century. He left behind breath-taking designs, yet nothing was ever built, a tinge of poetic irony concerning Futurist optimism. Clearly Cheryl was moved by his designs and, I think, brilliantly translated SantElia's work and the Futurist aesthetic into contemporary vispo: 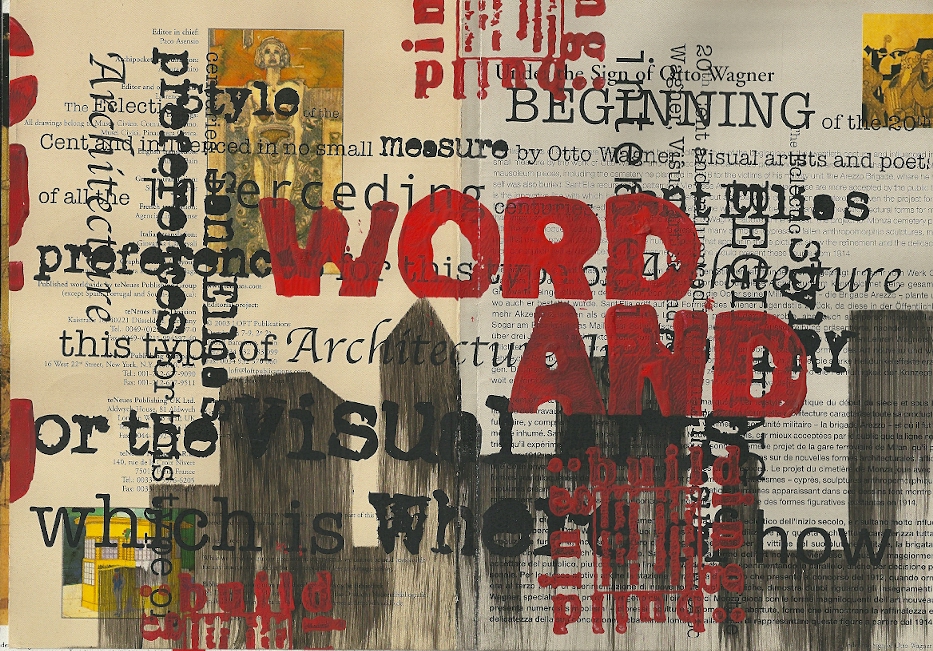 Futurism also took root in Russia, and that connection is probably stronger for visual poets today. Velmir Khlebnikov (1885-1922) is popular in the Eternal Network. I first learned about him through David-Baptiste Chirot. Khlebnikov worked with invented languages, concrete poetry, and numerology, in one instance attempting to translate ancient myths into mathematical equations - all with a Futurist bent. (Structuralism (rooted in Russian Formalism) later led a more successful effort to translate myth into equations.)

Cheryl Penn's translation of Futurist architecture into poetry seems a similar effort. For me, Khlebnikov's speculative "The Radio of the Future" is a strange foreshadowing of Jack Spicer's poetry, said to have been dictated via radio transmissions from Mars. Perhaps this is purely associative, but Sant'Elia's and Cheryl Penn's reveries on futurist architecture actually harken back to Giovanni Battista Piranesi's (1720-1778) architectural labyrinths and monoliths (admittedly a darker vision) that had an impact on such poetic notables such as Coleridge and DeQuincy, suggesting, ultimately, a connection not so much to reason as to the Romantic. 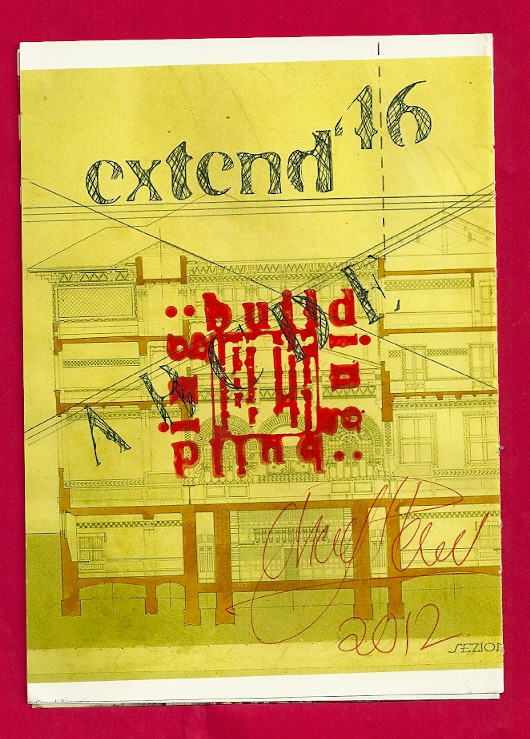 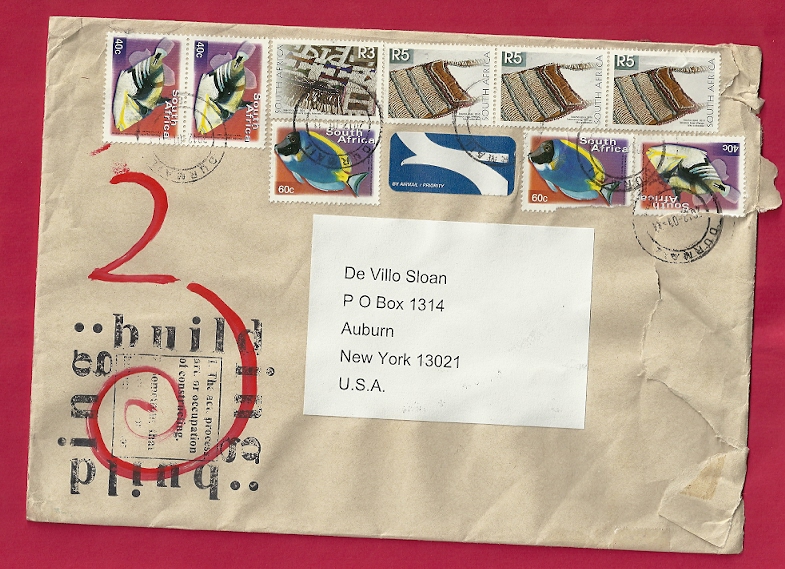 Many thanks, Cheryl, for this chapter that I will always treasure! Cheryl Penn's blog is becoming a global oasis for artist books-vispo: I am always pleased to be part of a project with poet, critic, artist and steadfast network supporter Guido Vermeulen in Brussels. In addition to providing amazing work, he always adds some new perspective. His homage to Henri Michaux (1899-1984) is an incredible contribution. I suppose you could characterize Guido's painting style as expressionist. I know he is very interested in dreams as a source for art and poetry, and these particular chapter pages seem like shadowy dream corridors filled with shifting images and scenes. The Michaux quotes work as a counterpoint, Guido's art taking taking over when the limits of language have been reached. Asemic writing is a great interest of Guido's, and this chapter has asemic aspects. When we were exploring roots in the Asemics 16 project, he championed and explained Henri Michaux's asemics. As a result Brion Gysin and Michaux were important inspirations for many of us. I read Miserable Miracle long ago, and it has had a huge impact on me. I revisted it during Asemics 16, to great benefit, and appreciate having these selected quotations. Guido has tapped the rich vein in Michaux's work and developed it, ultimately making it his own. I think Guido's chapter represents a highly refined strain of visual poetry-asemics in Europe that is beautiful, deeply philosophical, and offers much that can be learned. 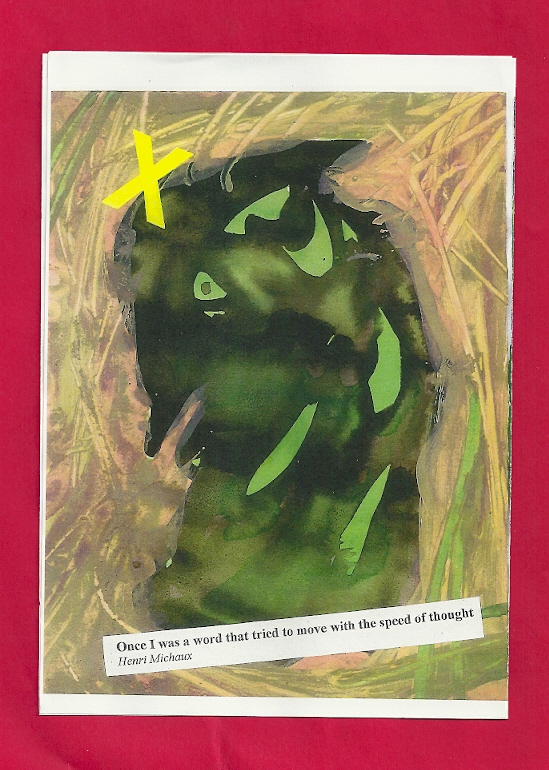 Guido also included an original print - many thanks! 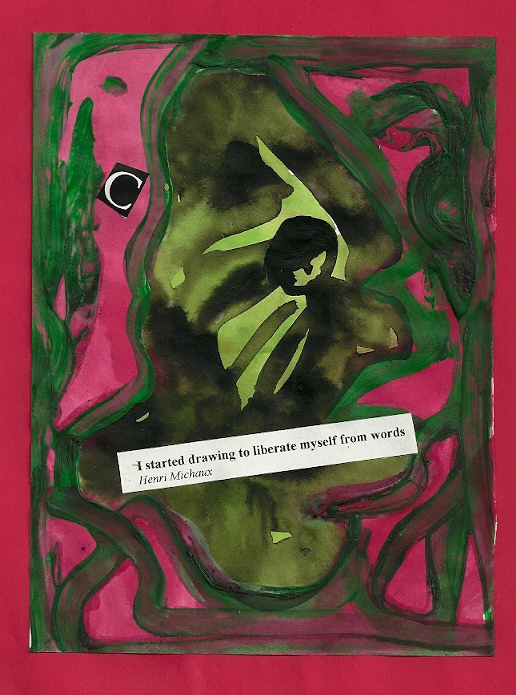 Guido Vermeulen manages a number of different blogs with interesting themes and fantastic work from artists all over the world. I have my favorites but will provide a link to his blogger profile so you can explore on your own: 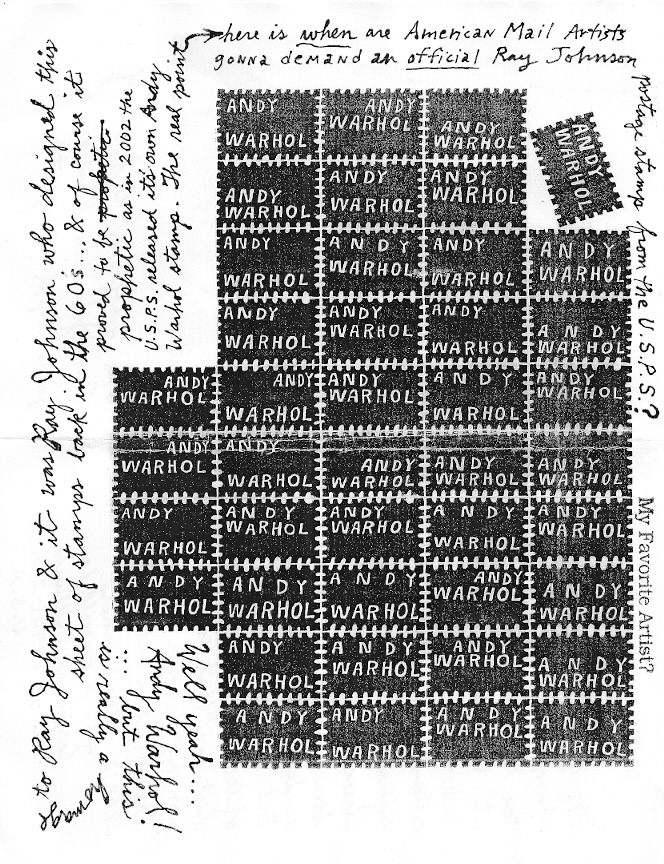 When Cheryl Penn and I first put out the call for the visual poetry books project, I have to admit we were both surprised to have Richard Canard as one of the first artists to sign on. We were pleased but had no idea if he had ever done books. This was going to be interesting. If Richard Canard was going to do an homage to an artist, that artist was going to be Ray Johnson. As the chapter explains, Richard began corresponding with Ray Johnson in the 1960s. He is a veteran member of the mail-art network. His chapter contains images, wordplay and bits and pieces about RayJo that help characterize mail-art and what it is really about and clues about the movement's often mysterious founder. 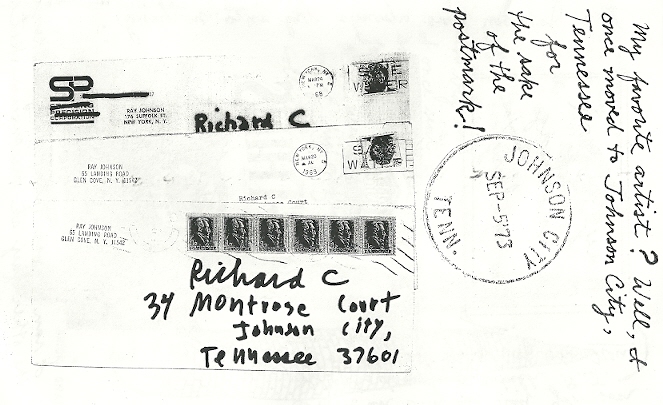 Above is a close-in, still difficult to read, of Ray Johnson envelopes addressed to Richard from New York City and Long Island (Glen Cove). I did not know about Ray's interest in snakes nor did I fully appreciate his preoccupation with "nothing." Did not know Ray did rubbings. As I always like to remind people, the New York Correspondance School was as much about language and writing as it was about art. The level of wordplay you find in this work basically no longer exists. Richard sent a copy of a New York Times article from 1965. It is almost impossible to read, but I think you can gather the main idea. I have posted this before, as copies can easily be found; but I think it is always useful to revisit this "A Book About Death" chart of the icons of the New York Correspondance School. This really explains the sources that influence mail-art, going as far back as Albers, RayJo's mentor at Black Mountain College. Apparently, concrete poetry came into the network in full force when Fluxus entered. Ray Johnson was always connected to Fluxus, beginning with John Cage, but he never officially became a member of the group, for whatever reason, although the overlap is very strong. 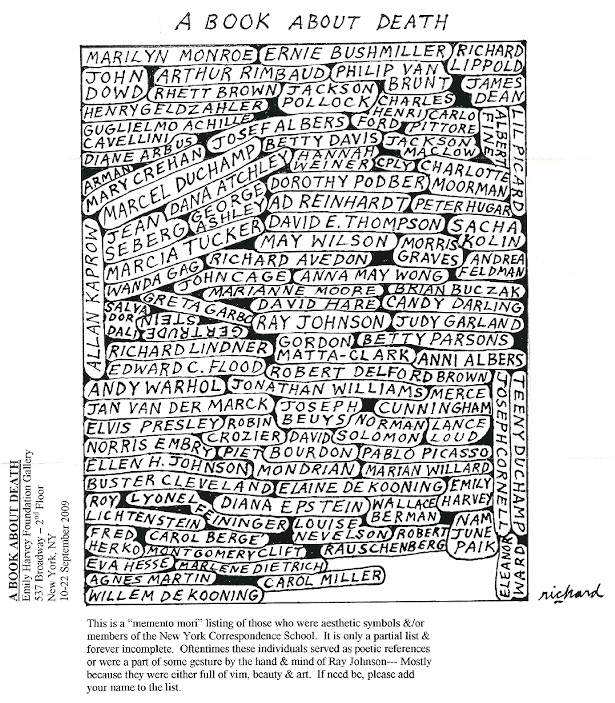 A bit more wordplay from Richard: 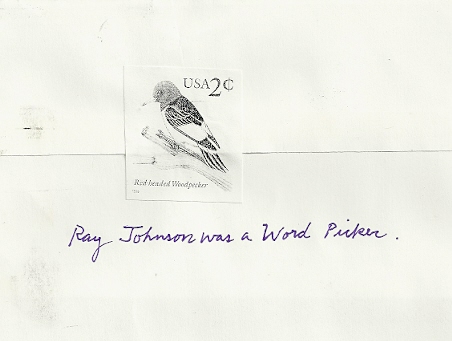 So Richard provided the visual poetry project with mail-art the way God intended, which is a great gift indeed.

Thanks Carina! An I'll use the opportunity - received wonderful work from you recently. More later!

Rebecca, I've read "The O-Filler" (Reid) several times since you posted the link. What a marvelous poem! Very relevant, too, to all of us working with altered text. I know that's literal, and also a bit of Holism.

Great content and wholeness in these work, wonderful to see!

Thanks Marie. These are indeed very special & work together. But I have enough stunner chapters left for a few more anthology blogs.

Delectable blog with delectable art. Each of those blogs get a little bit deeper into the whole vispo concept, I really enjoy. As usual you picked the very best ones.

Hi Cheryl, the more I look at chapters from the project the more I find. The artist choices in these 3 chapters, and how they were presented, I thought were particulary interesting. Bravo to you for digging into Futurism! And Richard's work on RayJo is nearly autobiographical. Is it vispo? Well, it is the real, original mail-art & much can be gained, I think.

Snooks & DK, seems like a dog's age since we looked at your chapters. Geez, this project went on forever. Thanks for having another look at work familiar to you because you were participants. I'll always treasure the Joseph Cornell, Angie. That is a great one.

Thanks as ever, Rebecca. Scottish poetry seems to be in the air. US poet, biographer, critic Tom Clark has recently posted several blogs about Scottish poetry, including this amazing view of Ian Hamilton Finlay's "Arcadia"

Finlay, as well as writing conventional verse, was a concrete poet & definitely got into Object Poetry with these amazing inscribed stone pieces. Apparently he was fascinated with the French Revolution, as I am.

TC also has material on the mid-20th century Scottish Renaissance in a nearby post.

Wow and wow again and thank you. Fabulous to see Cheryl's and to get your insights into the two other chapters that I am lucky enough to possess  That Richard wordplay reminds me of a poem by Scottish poet Alistair Reid -

The O-Filler.  I heard him read it a few years ago. Music. Here is a link I found:

And it must be official that De Villo never sleeps!

This blog post makes me happy!  all pieces are beautiful work!