The Polo Mint Adventures, Part 2 -- from Charlotte to Christo

This is the 2nd of 3 installments in the Polo Mint Adventures.

Here's a Polo Mint, just to remind you of what this is all about -- placing a Polo Mint on a work of art in a Museum, and taking a photo of it -- while trying not to get thrown out of the museum (as happend to me in Bilbao and St Jacques de Compostelle.

I visited the Bonnefanten Museum in Maastricht, the Netherlands, a few days ago. It has some modern art pieces in its permanent collection, and while I was there had a special exhibition called 'Martin Visser -- collector, designer, free spirit.'

Most, but not all of the Polo Mint enhanced photos come from the Visser exhibition.

I got into trouble as usual. One of the guards asked me what I was doing with my Polo Mint and camera. I explained. He didn't like my explanation and called his boss.

He asked me what I was doing with my Polo Mint and camera. I explained. He didn't like my explanation either. He assigned me a 'minder' -- Charlotte -- who, he said, would watch me carefully, and if I touched any of the exhibits etc then I would be thrown out.

I explained to Charlotte what I was doing, and she was quite amused (and probably thought that I was mad).

Here is Charlotte, with Polo Mint, of course: 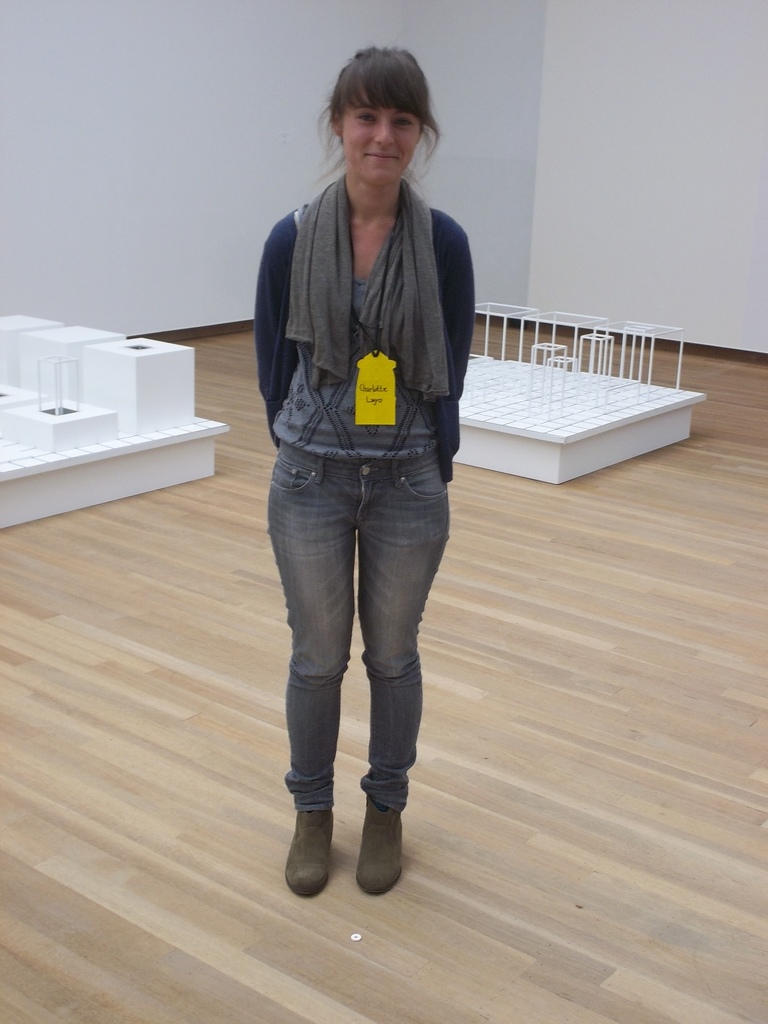 And now, on to some of the Bonnefanten's exhibits. We start with A. R. Penck's 'Head): The next one is Bernd Lohaus' 'Nur' -- you'll see that i managhed to get the Polo on this one: Some of this was, again, 'hit-and-run' gueriila Polo Art, and I didn't get to right down any details about the next 3 works -- big bits of steel, stone and wood, respectively, with little Polo Mints: 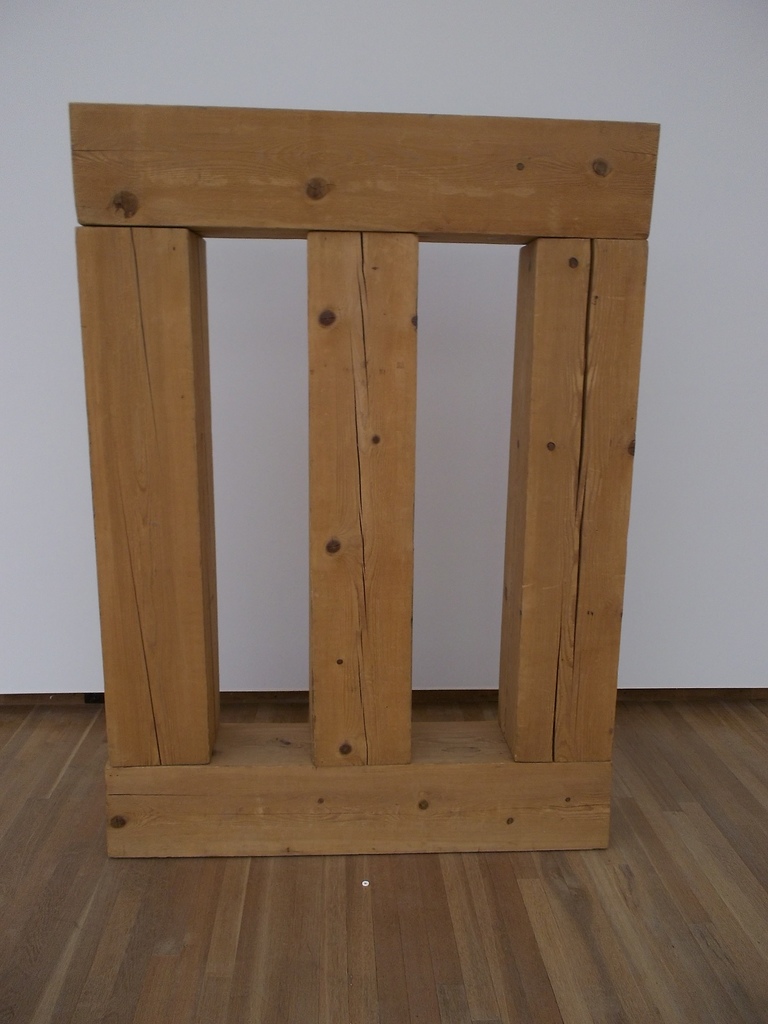 Followed by Cart Andre's 'Square Piece (for Martin & Maria Visser)'. It's now a square piece with a round Polo Mint. Next are 3 photos of 4 oil drums by Christo. (I couldn't get a Polo Mint on top of the fourth drum as it was too high). The drums are unwrapped -- the oil drums, that is, not Christo. Apparently, our friend Martin used to keep these drums in his living room, until Maria told him to move them out. I can't think why! 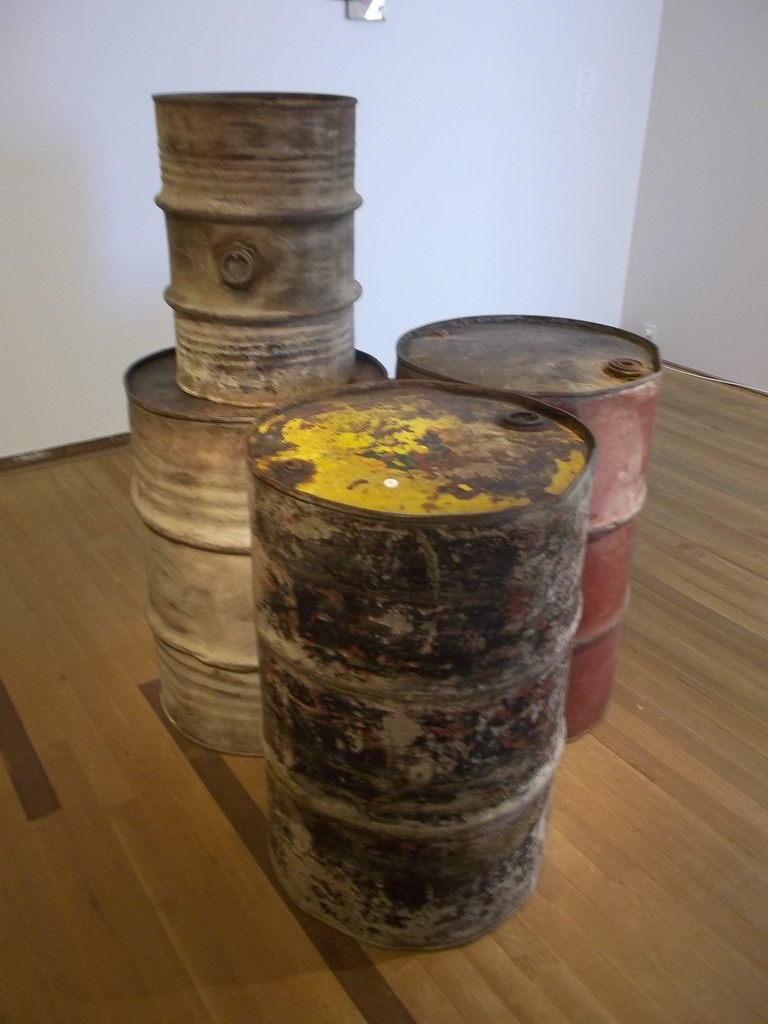 And here is a big messy collection of woolen things that, in my 'umble opinion, look much better with the addition of the Polo Mint: And now we have Donald Judd's 'Chair No 1' with 'Bench No 6' and a Polo Mint that doesn't have a number. (I might be mad, but I'm not mad enough to start numbering Polo Mints -- yet): 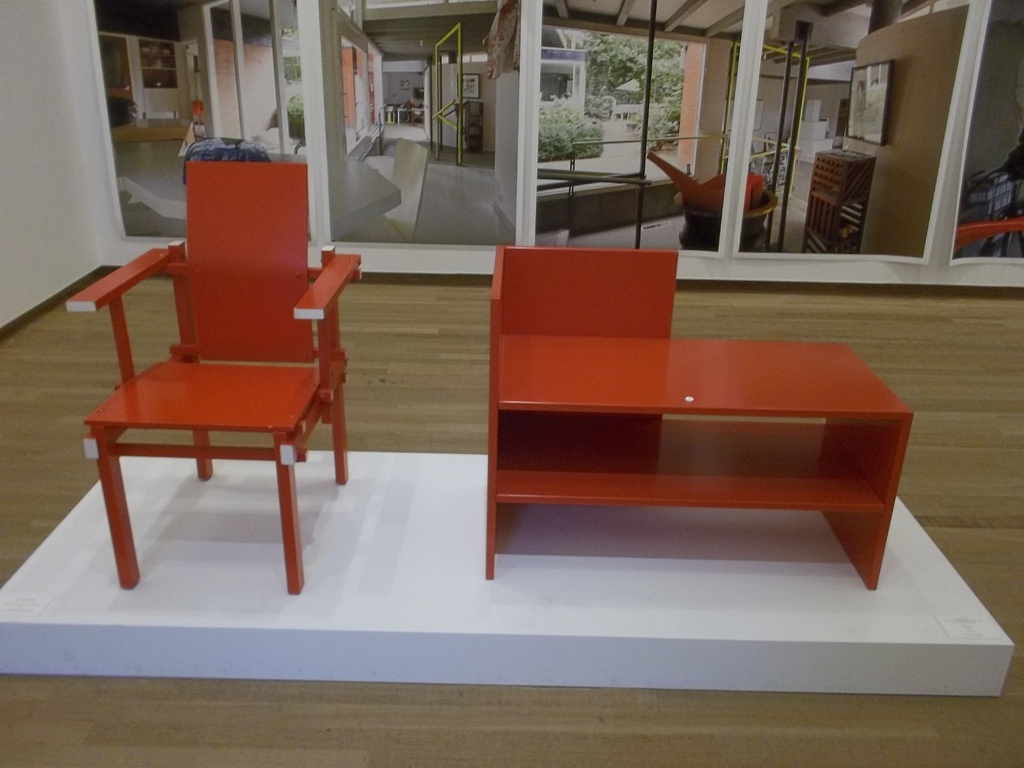 This a sort of mattress. I don't know who it's by. The added polo Mint is by me: 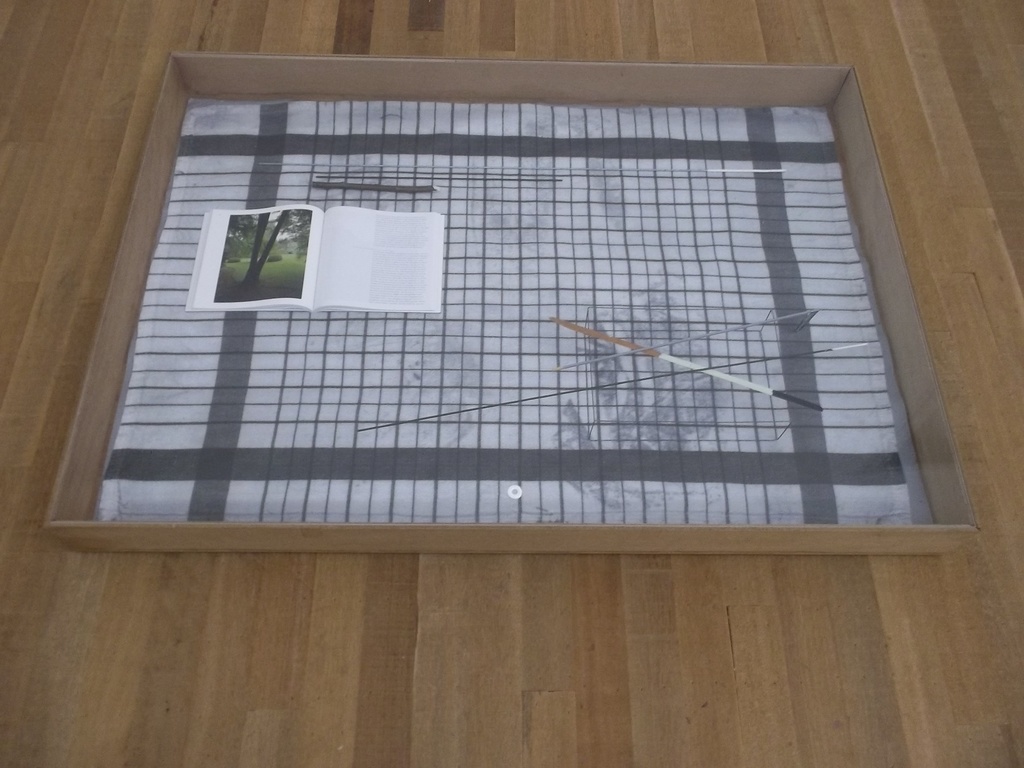 Here is a sort of metal 'book'. I don't know what it's called -- 'The Polo Mint Adventures', perhaps? Moving on we come to Richard Long's 'Slate Piece'. It's greyness was lightened by a Polo Mint: At the top of the Bonnefanted Museum is a giant sculpture by Sol de Witt. I added a Polo Mint to it. You can't see it, but it's there -- honest. Here is a stripey red and white thing, with a white Polo Mint. (Note for Polo fans: fruit Polos exist, and if had had a packet of those I could have added a red Polo to the usual white one. I'm not really a fruit Polo person though.) The next one is called 'Vergaderen' which means to assemble in Dutch. It's now 'Vergaderen met Polo Mint'. 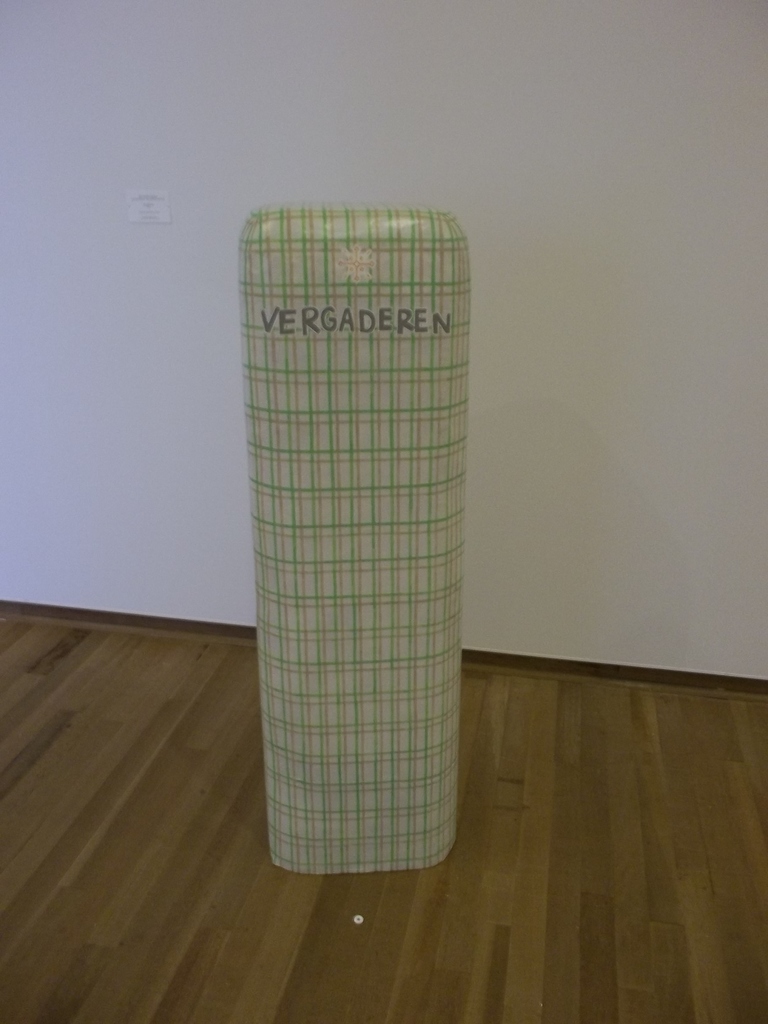 And now, by popular request, we have Walter de Maria's 'Nonagon', with ...guess what? And, to finish off, well nearly, the Bonnefanten collection, here are three white pieces (with white Polo Mints): 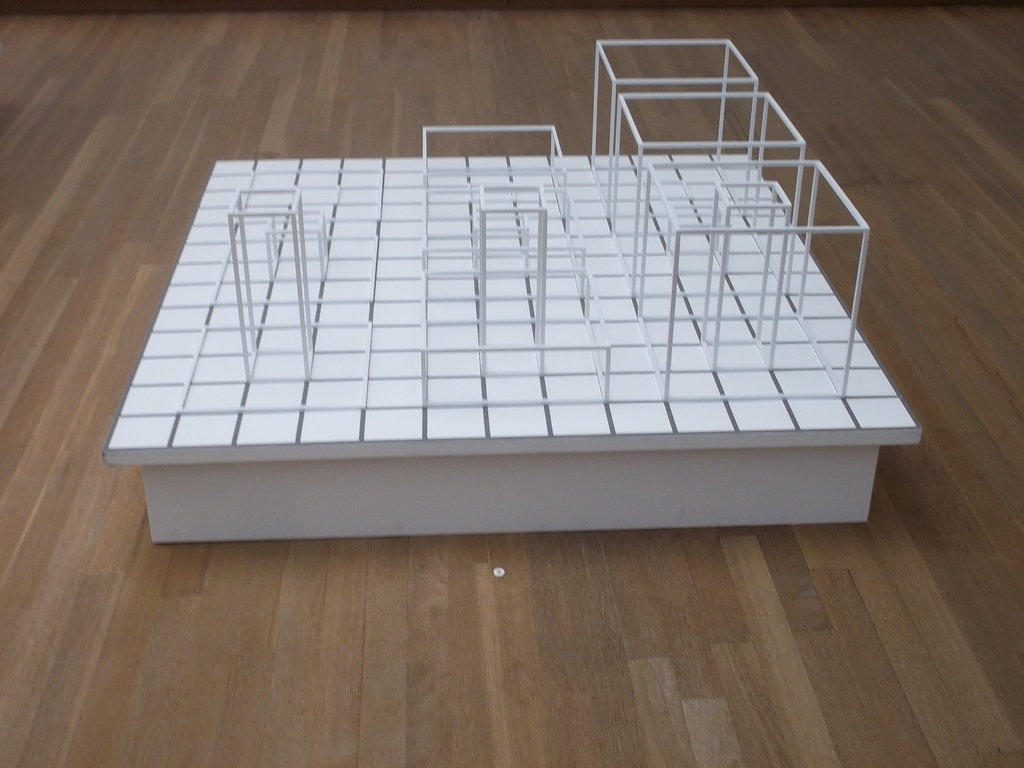 And then, just to end this, here is a photo of me at the Bonnefanten, taken by my Very Good Friend Charlotte. (It's not a very good photo of me,cos I ain't that fat -- but it's better than the 'photo' that Vizma came up with for the first part of these Adventures.) 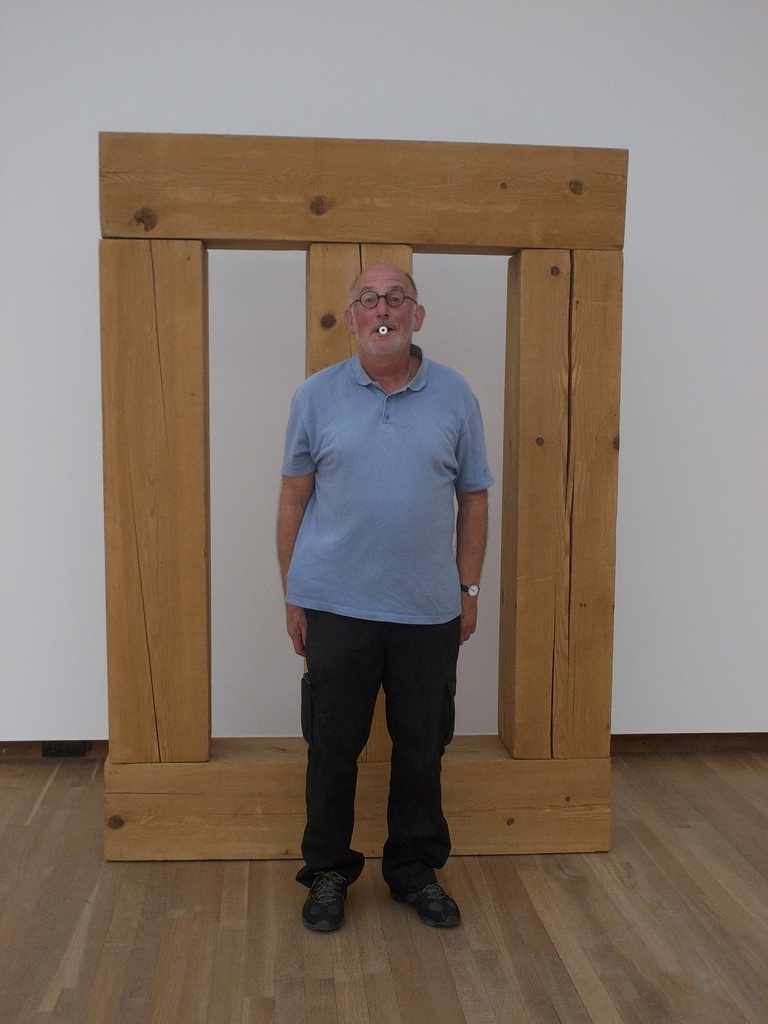 And there this part of the Polo Mint Adventures comes to an end.

Before signing off, I must tell you that I offered Charlotte a whole tube of Polo Mints, but she declined.

All the more for me, and my next Adventure.

Give it a try at Nelsons-Atkins, and you'll be surprised what you can get away with.

Ideally, you need two people to do this (I only ever do it by myself): one to place the mint (or 'offering') the other to take a quick photo.

If there is ever a 3rd person involved, it will probably be your lawyer.

This is great. I don't think I could get by with it at our Nelson-Atkins Museum of Art. I wonder what I could do... We aren't allowed to touch ANYTHING, even the shuttlecocks on the lawn...

Next time I'm in Maastricht I'll ask Charlotte if she's prepared to be your Museum minder. Alternatively, you could find a tattooed hippy chick -- wait until the 3rd in this series is posted later tonight, and then this might become clear(er).

I must admit it, the Polo Mint does enhance many of the Art Works.  Now to find us a Greek archaeological museum!

Very funny Val, I just read your Louvre joke, but you will see one part 1, I already had the same idea in the works.  Anyway great show and very entertaining.  So where can one get a minder like yours?

Thank you, Katerina.  No, I don't eat the Polos after a photo session -- they tend to ve very dusty and dirty. Why do Museums object to this type of activity? i think that it is because it viiolates their idea of the sanctity of a Museum. "It's our museum, not yours; And what would happen if people began to add all sorts of rubbish to our exhibits?" Just think about the sort of, er, 'contributions' and 'additions' that eean could make to the Louvre. No, I shouldn't have said that as it might give him ideas. (Don't worry Dean, we'll come and visit you in prison.)

One important thing: these are POLOS, not, repeat NOT lifesavers! (I only put that reference in so that folks might have a better idea as to what I was talking about)

Then again, Val...you would NOT, NO WAY be able to do this in a Greek archaeological museum. Nope, not a chance in a million!

Val, they should not mind if you photograph the art work and the lifesaver is NOT on the sculpture? When it is on the floor...why should that upset them? However...very dramatic is to get the polo mint ON...that Richard Long piece is fantastic!!! as are many of these photos!

And after placing the mint on the floor of the museum...pleazzzze, DO NOT EAT IT! yuk!

Hi Suus! I try and use one Polo Mint per Museum (and then I eat the Mint). Sometimes a Mint falls and breaks and then I have to use another. I always have a supply of them in my pocket.

There will be one more Adventure in the present series,  and then I have to find some other Museums to which I can introduce Polo Mints.

Are you going on the Kunsttocht in Maastricht this weekend?