When I started making mail art, I decided to keep somewhat detailed notes about what arrived in my mailbox and what I sent out. I did this from day one. In my notebook I would write down the artist’s name, and beside their name I would keep a tally of the amount they sent to me, and how much I sent to them. This way, I kept a one to one balance. There’s one person out there that I cannot possibly catch up with, damn Buckeyes! Overall, I was even with each sender or maybe a couple up. When I got three or four pieces up on someone I usually stopped sending, expecting that they’d gotten out of the game, or weren’t interested in sending to me anymore. I would much rather spread the work around to those that seemingly want it than to people who see my items as a complete nuisance.

The longer I sent things out, the more types of information I started to collect. I had a section of the names of people I sent zines to, a section for Nostrils recipients, a section for bigger items I sent out, and a tally of all the shows I sent my work to. Obviously the book filled up. There are no more pages in the old one to add stuff to.

I needed a new one. This time I decided to organize things a little more. To make things tidier, I put little tabs on the side of the notebook to find everyone’s name much quicker. Alphabetical order cuts down so much searching time for names-some folks I’d sent so much to that I could remember the random place in the book without any trouble. For example, I could get to Mr. Herman’s name in France very quickly. I even filtered out a lot of people that had stopped sending or never sent me anything in reply, cutting down my book by about two hundred addresses. If they come back to the fold I’m sure I’ll end up sending them something again, but until that time, they’re on a the sidelines for a bit.

So here’s the new book, it’s already started filling up. I started adding all of the stickers on the things months ago when I decided I needed a new. The old one turned into art itself, so I wanted to duplicate that whole process. One bit of OCD bookkeeping, I kept the old books tally of how much I sent and how much each recipient sent in return.

@Susan...sure, here's a not so typical page. I forgot a few names when I was reoginizing them, so I had to add them by hand. 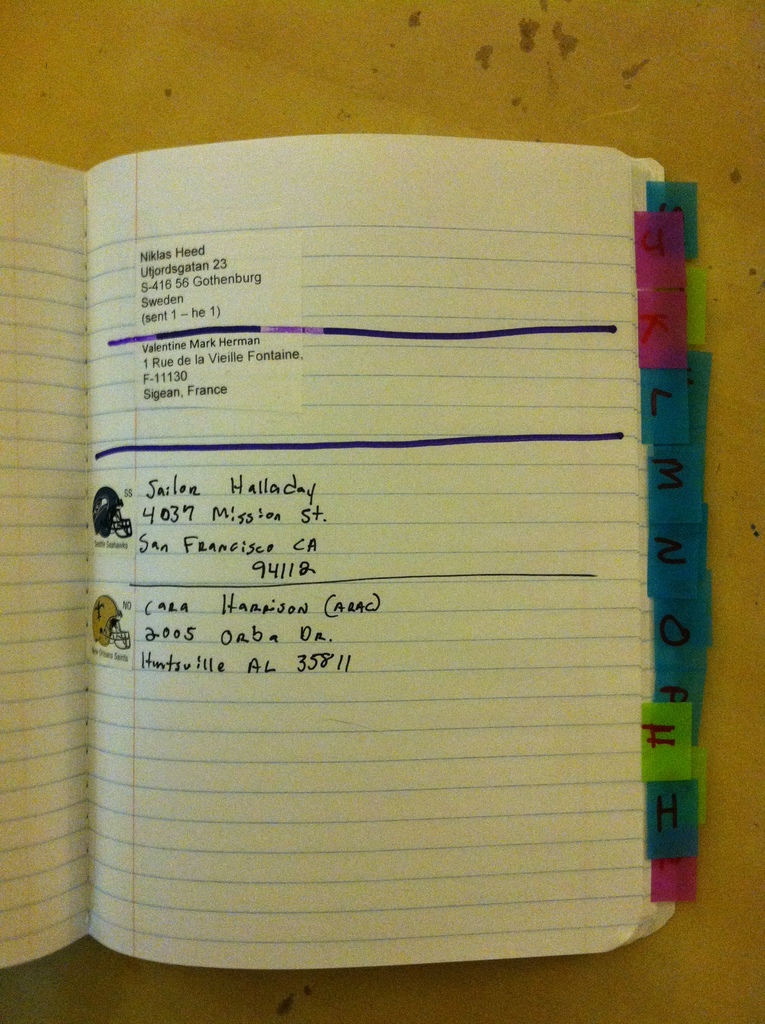 Comment by Susan McAllister on January 11, 2013 at 1:10am
Great book, Jon. Could you show how a page is organized? I'm still working on system. I think it's working well, but I always worry I'm missing something. Thanks Rebecca, I'll also check Viz's group.

So much fun! I can remember before I started my Peace Corps thing that I spent most of a day making an address book, putting in tabs etc.  My dad was incredulous that I would spend so much time on something like that.  I have it in a box somewhere and have come across it periodically.  Getting those things right can be so important, or at least it was to me, and it obviously is to you too, John. They are the things you save (or I did) and that take you back to a time and place, a feeling and music, pure nostalgia.

Now I live in much more of a need-to-do, can't-quite-keep-track basis.  New Year, new approach?  I'd like to , but I'd also like to make more mail art, oh compromise!

Vizma's 'Show us your Artspace' has some record keeping posts, in case you missed those.

this is great Jon! I need your skills!

I'm with you on that one, I would like to see how those with a much longer list of contacts deal with all the mail. I don't know if I could keep up this way of keeping records for decades, but it's worked so far.

Thanks for sharing this, Jon. I also enjoyed seeing shots of your journal in the video you made.

I am guessing "recordkeeping" of things received, things sent, what things sent - people have all kinds of different ways to cope. I'm curious about how longtime networkers & prolific folks manage to keep it all straight.