June 16, 2011 - Strelnikov is a mysterious character to me, a melding of person and persona. This work that I was very pleased to receive seems (and we all come at this from different angles) like something from the Third Generation of mail-artists Ruud Janssen has described: a great wave in the late 1980s and into the 90s that brought many newcomers into the established movement. Maybe it's the use of black & white, maybe it's the accident of the name - Strelnikov conjures the weird paranoia of the Cold War Era and its wake.

Strelnikov's work often has political overtones and is sometimes militaristic, yet there is nagging ambiguity about it. Some of that derives from its reliance on surrealism. The work I've seen strongly suggests there was more interest in surrealism in the Third Generation than is seen today, but these are only musings and speculations - Strelnikov's interesting and distinctive work inspires that. Here's the second piece Strelnikov sent, different but still very interesting: 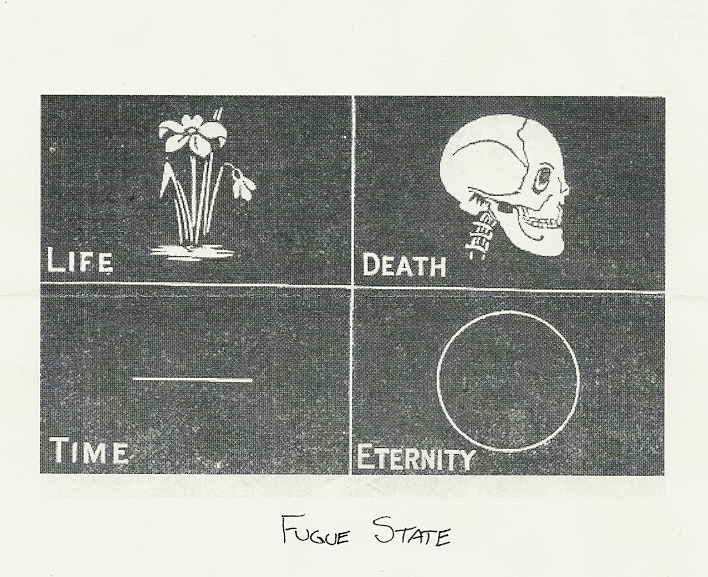 Strelnikov has a blog that only seems to take you into his world more fully, like discovering a vast conspiracy in a dream, without answering the most pertinent questions:

"Forget it, Jake. It's Chinatown."

Comment by De Villo Sloan on June 17, 2011 at 3:53am
It can mean anything you want it to mean, Cherry Blossom. I think I'm going to start an X-File tag for these interesting ones.

Comment by Marie Wintzer on June 17, 2011 at 12:27am
In french fugue means running away from home. But I guess that's not the meaning here.

Comment by De Villo Sloan on June 16, 2011 at 4:57pm
Interesting Cheryl, Strelnikov uses that theme similar to a fugue in music - and a fugue can have a four-part structure.

Comment by cheryl penn on June 16, 2011 at 3:48pm
Fugue as in loss of awareness of identify? Interesting word.

Comment by De Villo Sloan on June 16, 2011 at 2:07pm
Glad you mentioned it. The second piece is so different from the first. Definitely on some level an exploration of meaning and making meaning - very classic themes of life, death, and eternity. We encounter some unusual characters, for sure.

Comment by Marie Wintzer on June 16, 2011 at 1:57pm
I like the second piece, with the "symbol" of time. The other three would be quite obvious without that one, but, it is there, so...