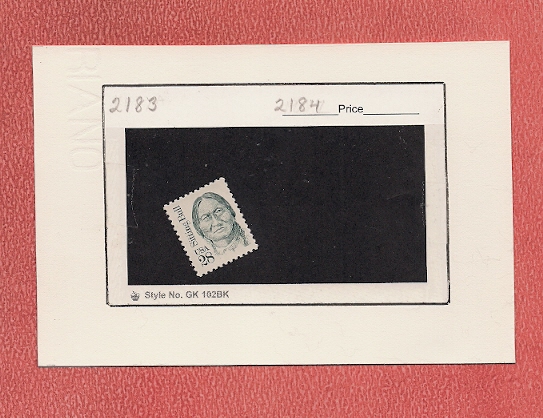 March 27, 2011 - Bifidus Jones sent this "Minimal Histories" piece, which seems like a departure from the signature overlays and complexity of images to which so many are accustomed. This is a real stamp (Sitting Bull) sealed in plastic. It appears to be an item you might find at a flea market or stamp collectors' store and likely shows the influence of Eduardo Cardoso's (Portugal) concept of minimal mail-art. It is simple, yet speaks volumes on topics such as postal history and Native American history - very masterful use of the minimal to achieve larger things. The reverse side indicates this is very much still the Bifidus Jones we know: The contrast between the two sides is marked. As new light is shed on things, is it fair to ask if Bifidus has always been a master of asemic writing? The envelope, too, is minimal, far from the Bifidus Jones norm:

I'm familiar with mail-art by Bifidus Jones, and it is very interesting to see work that might be described as experimental or at least pushing beyond established styles. Bifidus has always been engaged in finding ways to put vast amounts of information and references into mail-art forms, not an easy task; this is very likely an extension of that effort. This one strikes me as being very successful, and I am thrilled to have it. Many thanks!

Comment by Marie Wintzer on March 29, 2011 at 12:41am
It looks like the Bifidus has never failed at anything he has taken on. It's a new style but it's still very much him. Lucky you again!