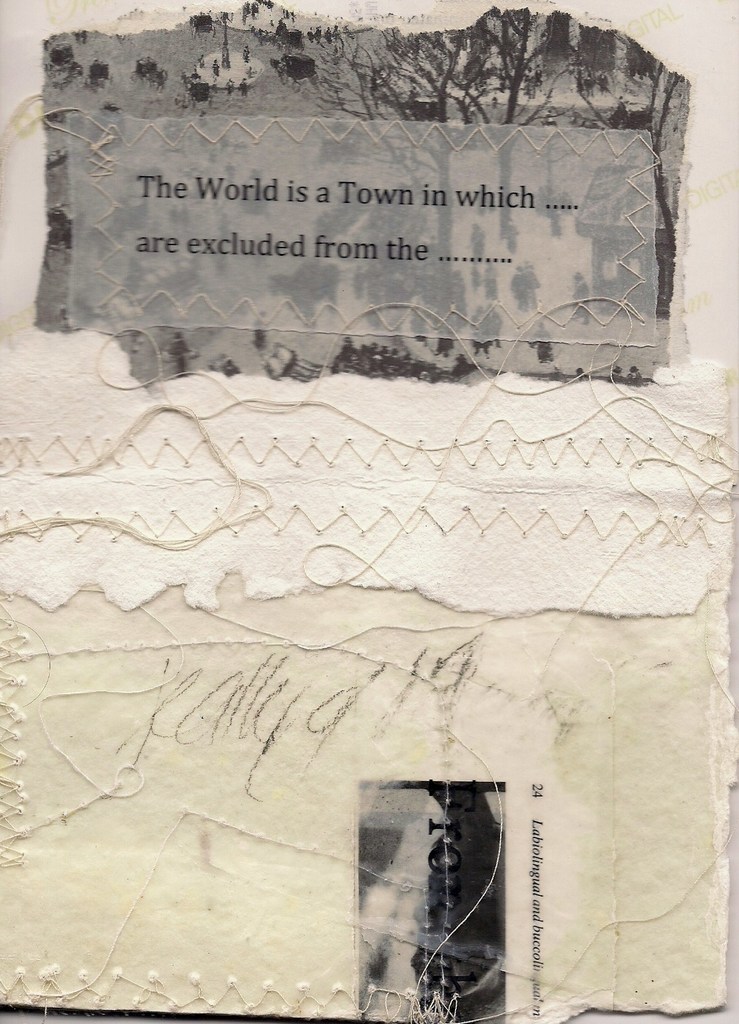 Mail-art book pages by IUOMA member Cheryl Penn (South Africa)
November 14, 2010 - The IUOMA has become a virtual zoo these days bursting with cats, dogs, and rabbits - chasing each other into world postal systems. And those mail-art monkeys just won't go away. Cheryl sent me pages from an artist's book she created, has dis-assembled, and is now sending out as mail-art. She supplied information explaining what she's doing:

These pages are yet another example why scans and emails cannot replace mail-art. Earlier in the fall, based mostly on scans I had seen, I suggested to Cheryl her work might reside too much in the realm of the abstract, theoretical, and formalistic. This proves once again just how wrong one can be. For me, these pages draw my complete attention to the fact that a book is an object. One's interaction with it is as much tactile and aural as it is visual. The book is material; written language is material. Bifidus Jones has started a fascinating haptic poetry group here at the IUOMA. I submit this "The World is a Town" section as a unique example of what might be most accurately described as a haptic book, if such a thing can be conceived. There are remarkably different fields one encounters when touching it, ranging from smoothness to contusions. It's interesting to listen to the subtle and different sounds your fingers produce running across the surface. All these interactions - I think - enable us to understand what a book REALLY is, allowing us to transcend complex cultural programing that has purely and simply blinded us and sealed us off from the world. Here's more: 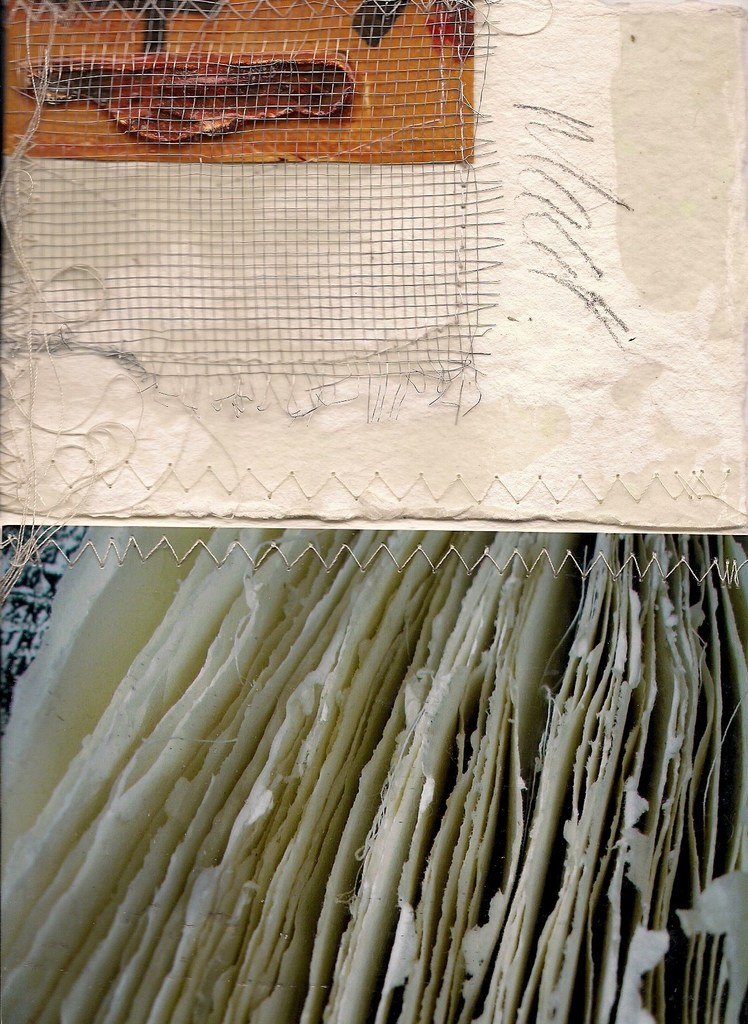 Cheryl Penn uses a piece of metal screen in the top section; the lower section is a photo. I had not made the connection before; but having the original piece, I note a similarity to Karen Champlin's vispo assemblages. In another unfair rant, I once criticized Cheryl for being aesthetic. Wrong again. What do you expect from a Delete-ist? This is meant in a very positive way: This thing looks like a controlled train wreck when you have it in front of you. If anything, it is leaning in the direction of found art. Like action painting, it is a record of the physical movement and emotional expressions of the artist - that's the real "story" this book tells, I think.
Now about the monkeys: I said never again. For this occasion, I am dusting off the old act, as it has new relevance. According to mail-art lore, not long ago a certain mail-artist in the great Midwest section of the USA claimed he had trained monkeys to create mail-art for him. However, he was so disgusted by their habits and behavior that he ejected them unceremoniously to roam in the cold, hard streets of the city. Knowing nothing else but how to make mail-art, the monkeys were left to scavenge and fend for themselves. It was viewed by some as inhumane. This became known as: The Monkey Purge (1). New developments strongly suggest that the Monkey Purge has triggered a wave of unrest among monkeys across the world, particularly concerning mail-art. Cheryl has had several encounters with monkeys lately. She attaches no significance to them. However, I am not entirely convinced. She did include a picture in the envelope, which made the situation more real for me. I include it here as a point of interest. You will see Jellybean the Chincilla (roughly equivalent to what is called a cat in the Northern Hemisphere (or possum in Minnesota). Jellybean is also the South African equivalent to Snooker the Amazing Mail-Art Dog of Wisconsin and is valiantly attempting to fend off a monkey assault as Cheryl, no doubt, attempts to finish a new book assignment for us: As with all things in the mail-art world - sometimes known for its unique humor - I leave it to you to separate truth from fiction - if such traditional notions apply (but Cheryl's monkey and cat picture is real!). And let us pause to remember other animal legends of mail-art: Comment by De Villo Sloan on November 19, 2010 at 12:15pm
This blog about Cheryl's work has been such fun from start to finish. I hate to see it fade, but as the Nevermind sort of said: "All Things Must Pass." Marie, it was right there all along and I missed it: You were the mastermind of the Monkey Purge - even if unwitting. Our friend will be forever proclaiming: "I was a patsy!" Some of it played out on your blog, if I recall. As for the Japanese fake Ray Johnsons - I'll just say the result was a slew of bags from Japanese McDonalds (the Golden Arches) being mailed back to the US in droves. Catch my drift? Ah well, let it all be recorded here.

Comment by Marie Wintzer on November 18, 2010 at 7:44am
Could I possibly be involved in the Monkey Purge without even being aware of it? I suddenly got a cold sweat, glups....

Comment by De Villo Sloan on November 18, 2010 at 3:56am
Marie, when I was in school at a large research university, a friend and I used to raise much-needed cash by volunteering to be test subjects for a variety of experiments. It was steady and paid well. But all the different things they did to me! I don't remember a lot of it. The laws about test subjects weren't as strict then; I don't know what all those different experiments were. I was definitely a human lab monkey. I was. Maybe that's why I took the side of the monkeys in the purge. And you! What were those experiments you were doing on those monkeys? Are the mail-art monkeys the product of some sinister government research project gone awry? This gets deeper and deeper. Yes it does. I will email you concerning the monkey mail dropped on Japan - one is an IUOMA member. And now I have some questions about YOUR involvement in the Monkey Purge!

Comment by Marie Wintzer on November 17, 2010 at 1:55pm
OMG I see monkeys everywhere now. In search of inspiration I leaf through one of my vintage magazines (like I must have done 20 times already) just to find an old photo of a group of monkeys (and I never noticed before). Time to go to bed I guess.... (and dream about monkeys?)
Funny this thing about the "Ray Johnson" mail to Japan. I haven't seen any of those cards, would be interesting. Maybe Ray Johnson is a bit less known in this part of the world? I don't know.
You're right, this post was about the dashing "The World is a Town", but you can only blame yourself, you included the word "monkey" in the title, your fault ;-))

Comment by De Villo Sloan on November 17, 2010 at 11:47am
Note to self: Marie worked in monkey lab. Note to self: Cheryl in denial, research bananas. Marie - our good friend's work was mistaken in Japan for Ray Johnson's - that is a true story - don't know if you witnesses that one or not. Controversy surrounded him everywhere he went in those days. This post was about Cheryl's book. And it's a darn great book. And we know that.

Comment by cheryl penn on November 17, 2010 at 6:47am
Oh! You two brighten my day! And no - no lost tribe are they, they know my house too well! No artistic eye have they - Vonnegut - "Take it from somebody who has been around for a million years. When you get right down to it, food is practically the whole story every time." Yip - especially food in a banana shape.

Comment by Marie Wintzer on November 17, 2010 at 4:29am
I used to work in a monkey lab before (that's true). Damn, I should have checked if they were artists.

Comment by De Villo Sloan on November 17, 2010 at 3:08am
Marie - if the haptic wave does hit, I bet you'll be there documenting it as well as making it. Your blog is just beginning to be - well, the best thing.

Cheryl - quoting Tolstoy in terms of the Monkey Purge is ironic (but not in terms of larger discussions about art!) Okay, the Monkey Purge was a chapter during the reign of a movement called Antonism. The Manifesto of Antonism was several pages from The Girl Scout Code - hardly literature. Much of the mail-art alleged to have been produced by the monkeys was, for some reason, sent to Japan. Due to what I assume were translation problems, some recipients in Japan mistakenly believed they were receiving postcards from Ray Johnson himself (who had died several decades ago, of course.) News travels slowly? I don't know. From what I saw of it, I don't believe it was meant to have been a hoax. The matter was clarified anyway. So who knows? Maybe the troop of monkeys that visits your house is some vestige of the Monkey Purge - perhaps a Lost Tribe. Put some blank postcards, magazines, and glue on your patio when they're not there. And when they arrive, see if they start making collages. Then you'll know for sure.