December 21, 2010 - On the heels of her "Alexander" chapter (and that is an intended pun), I received a card from Jen Staggs with the poem above. I'm calling it a poem. I am enjoying it as well as puzzling over it, and it seems to fit in with all these mail-art language experiments going on presently, including Fluxus words, da da revivals, and Burroughsian cut-ups. This piece does have a structure: the letters of the alphabet. And of course with the inauguration of the "26" collaborative mail-art book project here at the IUOMA some of us witnessed with shock and awe some sort of bizarre global dismembering of the alphabet, mostly by a visual poetry contingent. On top of it all - and you can never underestimate the workings of chance operations - I was e-mailing back and forth with an IUOMA friend information and observations about the symbolist poet Arthur Rimbaud. For a time he disappeared into Africa, was a gigantic influence on T.S. Eliot, and I am a perpetual admirer of Jack Spicer's "A Fake Novel About the Life of Arthur Rimbaud" (it's not a novel). Anyway, re-reading my edition of Rimbaud, I came upon this poem that I haven't read in a while that has some relation to what Jen Staggs wrote. I'm sure many are familiar with it, but maybe there are some who are not:

Some day I'll tell the tale of where your mystery lies:

Black A, a jacket formed of hairy, shiny flies
That buzz among harsh stinks in the abyss's bowels;

White E, the white of kings, of moon-washed fogs and tents,
of fields of shivering chervil, glaciers' gleaming tips;
Red I, magenta, spat-up blood, the curl of lips
In laughter, anger, or besotted penitence;

Green U, vibrating waves in viridescent seas
Or peaceful pastures flecked with beasts -- furrows of peace
Imprinted on our brows as if by alchemies;

This is a sonnet (I'm really unhappy with this translation I found) but the more important structural element is that it's built around vowels: A-E-I-U-O. And each vowel is assigned a color. And then the vowels are associated with images. If you use your imagination a bit, it's not hard to see this poem transformed into vispo combining images and letters. The suggestion is clearly there. And it shouldn't be at all hard to understand why I'm calling this a foundational document in the emergence of what we call today visual poetry. In fact, I'm really surprised no one has made this into a visual poem. Maybe someone has. For all you Punk Era mail-art fans, Rimbaud was an idol for many punk types in the U.S. (I'm catching the drift just how different it was in Britain). A passage such as: "shiny flies/ that buzz among harsh stinks in the abyss's bowels..." helps explain why - sort of visionary grossness. "The Drunken Boat" was huge.

The point being, artwork using the alphabet or subsets of the alphabet have a presence in many areas of the avant garde that contribute to mail-art. To get ever more esoteric, there is Louis Zukofsky's "A" (an 800+ page poem about the letter A that took I think about 50 years to write - he had intended to do the whole alphabet, but never made it past the first letter). Ron Silliman is currently engaged in a similar project and is making, I think, a bit more progress. Strange waters are these; beware the alphabet. The address-side of Jen's card was characteristically wonderfeul: 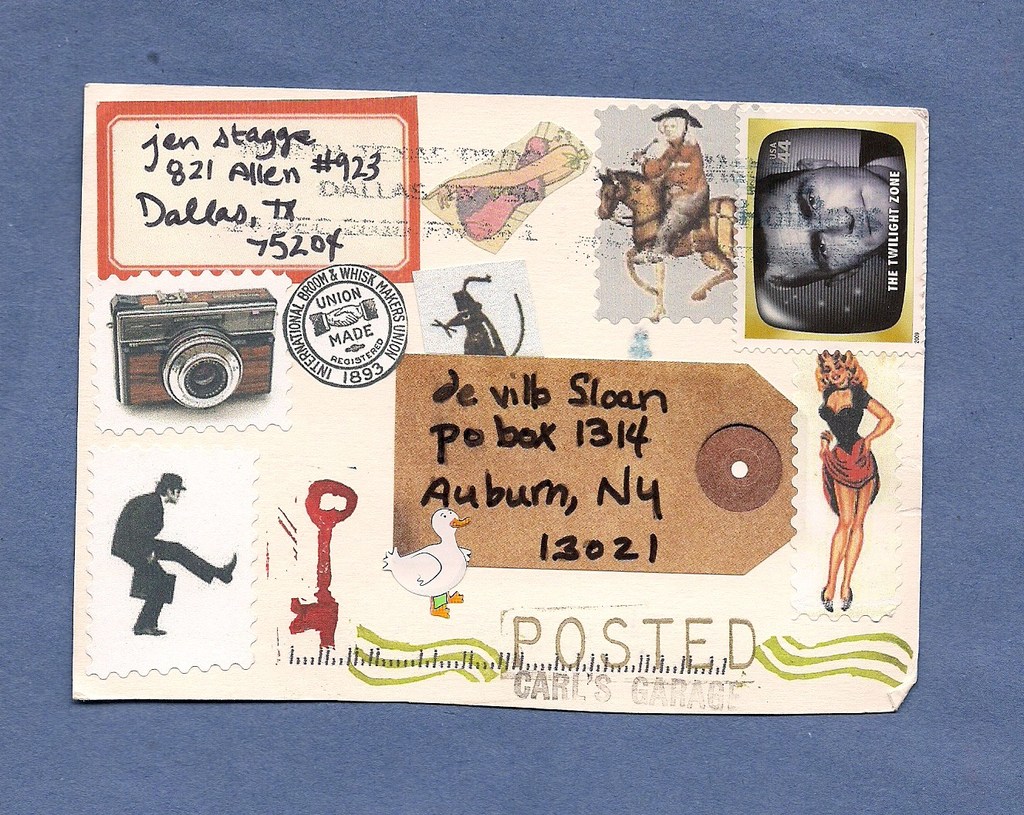 As ever Jen, many thanks. And it IS always thought-provoking work you send.

Comment by De Villo Sloan on December 27, 2010 at 2:32am
Holy mackerel, then you missed it. But while I have you on the line, I can tell you still haven't gotten ALL of it. Otherwise your response would be: JHGVJ !!! KHGV ??? I already explained how Rimbaud sort of wrote "Trout Fishing in America." Like wooden ships...

Comment by cheryl penn on December 26, 2010 at 7:36am
o my word! That's SO OBVIOUS! Always looking for a herring am I. Rimbaud is shouting RED I in the background - he knew 2. And no, I meant the letters.

Comment by De Villo Sloan on December 26, 2010 at 12:17am
Sounds fishy to me. Did you mean this as a response to Grigori's "Why no fish in Africa?" And now the truth can be told about the Grigster, who is very cagey indeed. At the bottom, in the supposedly "found" section that has University of Minnesota at the top? You see something like: I814U. It's "I ate one for you." And it also says New York State Department of Agricultural. And maybe from long experience I am getting versed at this stuff - it's clear as day 4 Me 2 C. Is it as clear 4 U?

Great work, great blog - AGAIN! I dont know why and I know it refers to mackerels, but this work reminded me of:

They lie in parallel rows,
on ice, head to tail,
each a foot of luminosity
barred with black bands,
which divide the scales'
...
like seams of lead

From A Display of Mackerel by Mark Doty. Atlantis: Poems 1995