"on the oth" - A Vispo Book by Chris Wells (Columbus, Ohio, USA) 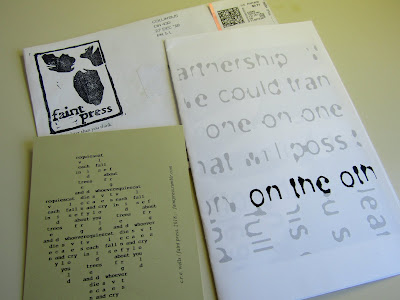 Faint Press mailing from c.r.e. wells (IUOMA member Chris Wells) (Columbus, Ohio, USA)
(Note: Pardon the commentary. I know this is a little technical because visual poets comprise a large part of the Asemic Front 2 audience. But AF2 is at its core a mail art project. All are invited to contribute. DVS)
March 25, 2019 - Chris Wells is active in the international vispo community and the Eternal Network (mail art). This hard copy mail from him for Asemic Front 2 shows the benefits of circulating work in both these groups that are gallant supporters of post-avant art. Wells' Faint Press, headquartered in Columbus, Ohio, USA, is increasingly a presence of note with its innovative, finely produced yet refreshingly non-elitist publications. Chris Wells has been a faithful contributor to both iterations of Asemic Front, so I am always very interested in watching the evolution of his solo work and his collaborations.
on the oth is a well-considered series of visual poems (image-text) that originally appeared in digital form in the venerable journal Otoliths (#46 Winter 2017):
https://the-otolith.blogspot.com/2017/06/cre-wells.html
Since on the oth is available in both digital and print form, I will not worry about reproducing the series in its entirety for readers. This access is exactly why I applaud Wells' involvement in vispo and the Eternal Network. on the oth is available and well-documented for our viewing and study. 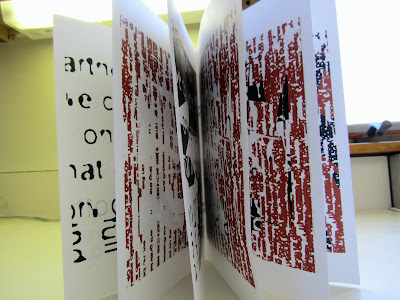 on the oth by c.r.e. wells (Chris Wells)
Chris Wells is a visual poet whose work tends to be rooted in concrete poetry and explorations of the relationship of image to word (sign). And on the oth is a particularly excellent example of this work. Readers know an exploration of concrete poetry's relationship to asemic writing is a central preoccupation of Asemic Front 2. Chris Wells' work, along with Cheryl Penn's for example, is of great importance to the AF2 effort.
The book is an extended (long lyric) or serial poem; thus we can follow themes and variations, deconstructions and reconstructions with far more depth than the quick, single-scan form that the digital world inherently encourages. I have written before about visual poetry and asemic writing requiring a new kind of reading. on the oth will provide profound revelations to any reader who spends meditative time with the text and abandons preconceptions about reading. 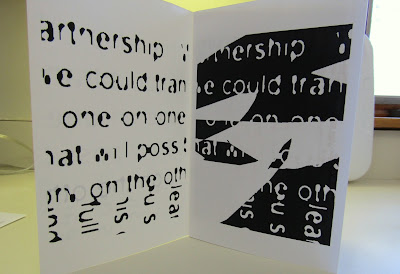 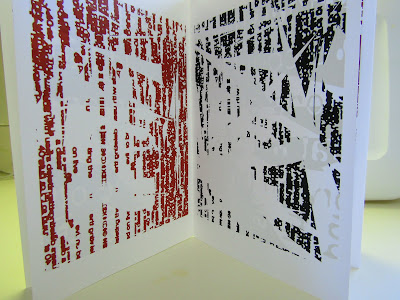 on the oth confirms my theory of a vital and enduring "school" of visual poetry in the heartland of the United States. Some of the important historic figures include: Miekal And, Liz Was, David Chirot, Matthew Stolte (Wisconsin); Diane Keys (Illinois); John and C. Mehrl Bennett and now Chris Wells (Ohio). These poets do not simply share geographic proximity; they have shared aesthetic and thematic concerns. on the oth surely places Wells on equal footing with this seminal group of USA visual poets. 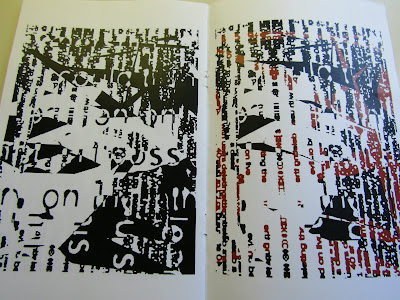 Wells achieves the gritty urban industrial repetitions and textures found so masterfully cultivated in work by Chirot and Stolte. This is a trademark of the Rust Belt vispo. He uses to great effect the copyart aesthetic of Miekal And's best work. Modernist fragmentation and the Burroughs cut-up as filtered by John M. Bennett are prevalent in Wells' work. While I admire and recognize Chris Wells' originality, this book is rife with influences from other poets and his environment. Wells seems to embrace in Whitmanesque expansiveness the spirit of his regional literary community.
The Rust Belt vispo was primarily in its origin, even curiously, a masculine genre that blended into the popcult landscape of its time with Punk anger and antiart; it has matured and mellowed. The presence and growing influence of C. Mehrl Bennett and Diane Keys (again only to present a few female examples) is taking this vital aspect of American vispo in new directions. Chris Wells has produced successful vispo collabs with Diane Keys, which reflects his place in the continuum.
We live in a time when asemic writing is a practice and sometimes issue of contention in the vispo community. Few visual poets are working without at least feeling the presence of asemics as they compose. on the oth is primarily a book of text-centered vispo, but I believe asemics are present in the book because on the oth de-signifies the conventionally readable text present at its beginning; the title itself points to de-signification. This process might also be called moving the comprehensible to the incomprehensible, estrangement, and reducing language to its core materiality. All these are devices recognized in the composition of asemic texts. They are also consistently present in work by Wells and related poets.
on the oth by Chris Wells is a much-appreciated addition to the Asemic Front 2 project. I hope we will share more work by this author/artist in the future. 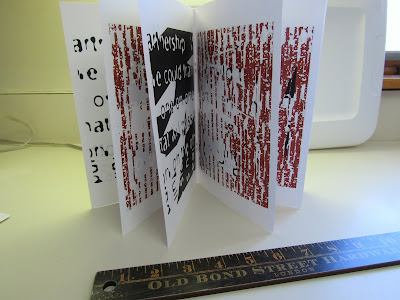 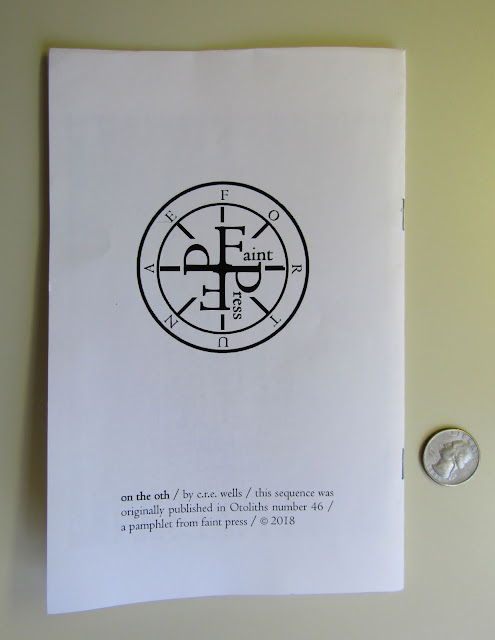 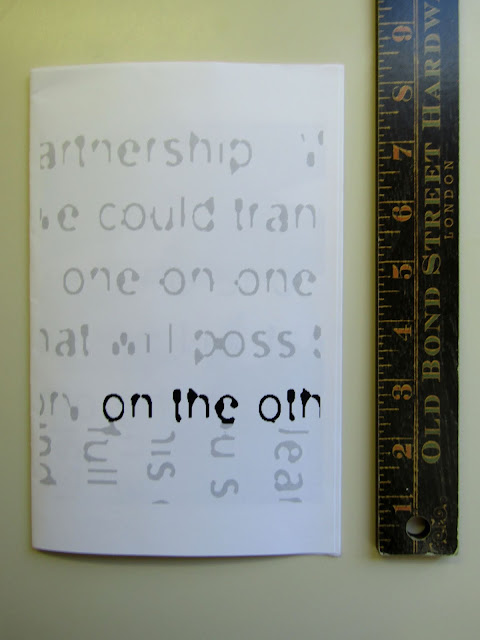