On the Airy Flight of Words

Friends from South Africa have been thinking of me recently. A second mailing of South African provenance arrived of GOTIJ-standard caliber.  Strikingly, the format was similar to that of another South African compatriot's piece recently received--it was an accordion piece, and it also depicted an animal, though of the more aerie variety.  One really had to discover the avian fellow, however, as he splashed around in a bath of liquid alphabet characters. This gift from Cheryl Penn has intimations of themes we've shared and explored before--as inspired by Cheryl's 'The World is a Town' project that in turn was inspired by the Novogorod Codex, a discovered wax tablet which was a true palimpsest--text overwritten with text overwritten by text over and over.  And just like layers of silt in an archeological dig, each layer reveals clues that can change or alter or develop or expound on perceptions and details from previous layers.

The cardstock medium of Cheryl's piece contains faint text that appears erased out, broken, at odd angles, and overlapping.  There seem to be several different handwriting styles, and numbers in addition to words.  But they are all but lost.  A scientist could spend several years deciphering and decoding this Rosetta Stone with a high-powered microscope and knowledge of ancient languages.  We can only pick and choose fragments that might aid us in creating meaning...  The word "Human" seems to appear several times, in several iterations. "Who am I; I am..." "Human or Bird?"

Sometimes the human brain creates it's own words based on assumptions and tricks of the eye.  Can we trust what our brain is interpreting?  Can you read this sentence?:  Smetimoes our biarns can raed wdros wehn olny the fisrt and lsat lrettes are in the rghit pcale--wreid, huh?  But, one wonders if our eyes sometimes "read" things when they were not meant to be interpreted.

The uppermost layer of capital letters reveals the most distinguishable dictum of this palimpsest:

"WHEN WORDS ARE RESIDUAL SHADOWS THEY CAN'T FLY."

There are sometimes timeless words of wisdom, and sometimes there are words that leave us with the ability to evaluate our time.  The difference between scientists and artists is that without concrete and repeatable evidence, the scientist does not have the ability to make declarations; artists, however, can see possibility in the artifacts--whether successfully repeated, or repeatable failures--and can create worlds of imagination.  Cheryl's work can definitely make the artist's mind take flight.  Micron microscopes might not be able to read all the ancient words in this palimpsest, but Cheryl owns them and has given them history with her creativity. 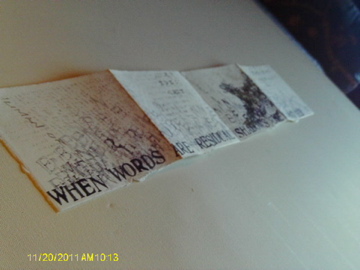 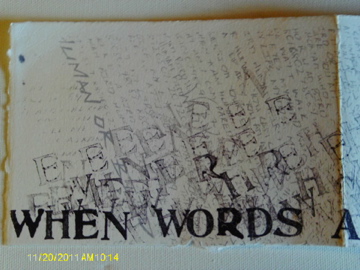 Still can't seem to figure out how to get more picture to insert in the main body of blog posts--I didn't think they were very high resolution--but a few more additional photos will be placed in the comments fields.

Thanks, Cheryl, for such a thought-provoking and beautiful artwork!

Hey Thom - thank you for your words -  they don't exist in the shadows, therefore they fly :-) - I suppose a step before this was another work - if letters had wings, words would fly. I am sometimes saddened by the casual handling Words receive - they seem some days like physical entitles - when they're out there, they cannot be retracted - therefore, handle with care :-). And they get scattered and lost when not in use - hundreds of wonderfully descriptive words, lost  through neglect, entering the shadowlands.  We need some language guardians - but, that of course is a debate for another day  - thank you again :-) X

Thanks one and all for your comments... it truly is one of those pieces with which one could spend hours as you let your eyes roam through the menagerie of cryptic fading shadows.

Lisa and Kat--your observations really add so much dimension to Cheryl's work and the ideas and images it evokes.  Do you know, on my drive to Oregon for Thanksgiving with family, I went through Vader, Washington, where a large "school" of starlings was creating some phenomenal aerobatics in the sky.  They were surrounded by other birds making migratory waves of moving lines around them, making sigils in the sky.  The whole thing was apocalyptic--I'm surprised all of us drivers on the highway didn't careen into one another and crash ourselves as we tried to drive and catch a glimpse of such an astonishing natural phenomenon.  It was something like this:

Hope everyone had a blessed Thanksgiving.

"the bath of liquid alphabet letters"--love that, Thom. Beautiful blog of a beautiful work by Cheryl.

It's like the motion of flapping wings!  true flight....*o*

The stamped letters seem to float and fly if we view from words below to letters ascending...

or If they "can't fly" are they settling downward in a heap?

Sorry, me opiimistic: they begin to float upward! An amazing piece! 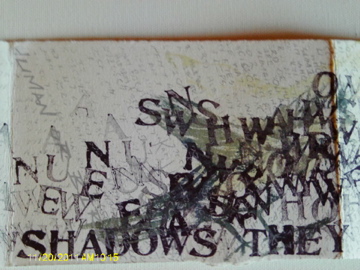 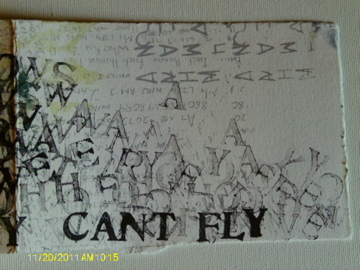