Néo presents INTERNATIONAL MILAN:MILAN AMONG THE TOP 5 DESTINATIONS TO VISIT THIS YEAR 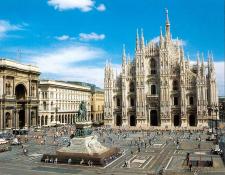 MILAN AMONG THE TOP 5 DESTINATIONS TO VISIT THIS YEAR ACCORDING TO THE NYT: HERE’S WHY

It is one of the stars of the last year: Milan. The New York Times put it among the top 5 destinations that should not be missed in 2011. In the last year, despite the crisis, it was one of the few Italian cities that saw an increase in the number of tourists compared to the preceding year (+8%). Not only that it was the first XXI century metropolis that opened a new museum in the main square, the only one to have organised  Fuori Salone  events that involved the entire city and attracted international tourists, it is also the fashion, design and opera capital and home to the reigning football world cup champions.  Finally it is the city of Expo 2015, where it will be in the world spotlight.  For the first time Néo, e-Magazine (www.neoenews.com: free subscription), is dedicating an entire issue to the city of Milan. The special edition will be published on the 10th of May (the 16th of May for the international version).

A tribute to the city that this year has seen an upturn in growth by focusing on cultural chic tourism and its new cosmopolitan identity which has been redesigned by creativity and the young avant-garde. In the next issue of néo, therefore for those who want to know about the city’s new identity there is a mini-guide with the places not to be missed: from museums to the Scala Theatre, and from religious sites to Leonardesque itineraries. For those who on the other hand want to know more about the creative scene in Milan, from installations and fuori salone events the world famous archi-stars and  artistic chefs.  Finally there is The Expo 2015 in Milan dedicated to food quality and safety is intended to be a driving force for the economy of the area and represent the best in the food sector in Italy and Milan. To understand further what the Expo will mean for Milan we take a look back at the previous editions around the world.

A triumph of success that is also on the web. Milan has decided to focus on tourism 2.0, by making the city interactive and just a click away at any time of day. Nèo is also dedicating a special feature to the site www.tourism.milan.it which in just a year has grown from 200,000 to almost 2 million visitors.