July 10, 2018 - Trashpo (and the accompanying DKult of trashpoets) has been a network activity for about a decade. (Opinions differ – of course – about where and when Trashpo started.)

The popular consensus is that Trashpo began with postings by visual poet Jim Leftwich (Virginia, USA) on Fluxlist in 2007. Diane Keys (Illinois, USA) brought Trashpo to network popularity circa 2010. Trashpo – perhaps – has seen its nascence; however, it is still made and we still have avid, head-banging “DKulters.” Trashpo seems to have made a lasting impression on the Eternal Network.

Trashpo produced mail art stars (as much as that is possible) who were named in the various fanzines and on collector cards (yes, there were actual Trashpo fanzines and collector cards) as “Legends of Trashpo” or “Trashpo All-Stars.” This was a rare honor and some will recall Neil Gordon was an official “Legend of Trashpo” who brought a “first thought best thought,” rugged, ragged Punk aesthetic that helped define Trashpo at a crucial time in its evolution.

I have to rely on memory to list other official “Legends of Trashpo,” so I will probably miss some. They include Diane Keys (of course), KDJ (yes, she is a real person), Ernie Baer, Borderline Graphics, Richard Canard, Marla Kittler, Mail Art Martha and others

Many “Legends of Trashpo” are retired from the network or are less active than in the halcyon days when Trashpo was spreading across the globe. This is very understandable, so I am thrilled to receive the occasional piece from Neil Gordon. It is the flawless work of a master and originator. Time for a close-up:

People still ask me, “What is Trashpo?” After a long time struggling with cogent answers, the best I can say is, “It’s whatever Neil Gordon does. It’s whatever Diane Keys does.” Neil Gordon has sent the perfect Trashpo composition here, right down to his signature tea bag wrapper.

Neil Gordon sent an altered junk mail letter, but my printer insisted on chopping it up:

There it is! Authentic Trashpo made by a legendary master! Superb!

There were many, but alas no klassics, as I was severely compromised by my Martha Stuart School of Asemic Wallpaper diploma. I was lucky that DK gave me the time of day when she did. Jayne recently inspired me to do another studio trashbook, which was enjoyable beyond words to make, so thanks to Jayne too.

Thx nbs. I think you contributed a klassic or 2 to the Trashbook genre.

More Neil Gordon trashpo masterpieces. It must be in his genes. You inspired me to go back and look at my scans of trashbooks from Neil, and here's the front of one he sent me in June 2013: I just came across scans of a Trashbook Neil Gordon sent me in 2017. Neil made it for the Karnival of Trash mail art call. Jane, you are such a peach!

The idea with Trashpo is to make something so bad and lame that someone will think, "OMG! I could do that. And so much better!" Because Trashpo is meant to be art for EVERYONE.

Trashpo approaches art in the Trashbooks. People have made epical, brilliant Trashbooks that you can find on old blogs.

And you noticed that "Reich" thing. Marla (LP) is pretty sharp. I thought maybe she was alluding to Fascism and Sir El Gin. BUT the psychologist Wilhelm Reich (Orgone Energy) comes up a lot in Trashpo. It could be a reference to Wilhelm Reich.

Bernice is a totally fictional character who appeared in the DKULTNY fanzine. Yeah, I made the really messed up cards. Marla's are much better.

Have you seen the DK and goat pic? Thanks for digging these up, and sharing! They are very cool!  Sir Elgin “never knew right from wrong.” :) So you made the DK, Bernice and KDJ cards? They are eye candy to me. Very nice!

by Lucky Pierre. (What I can't find is the Neil Gordon ATC!) 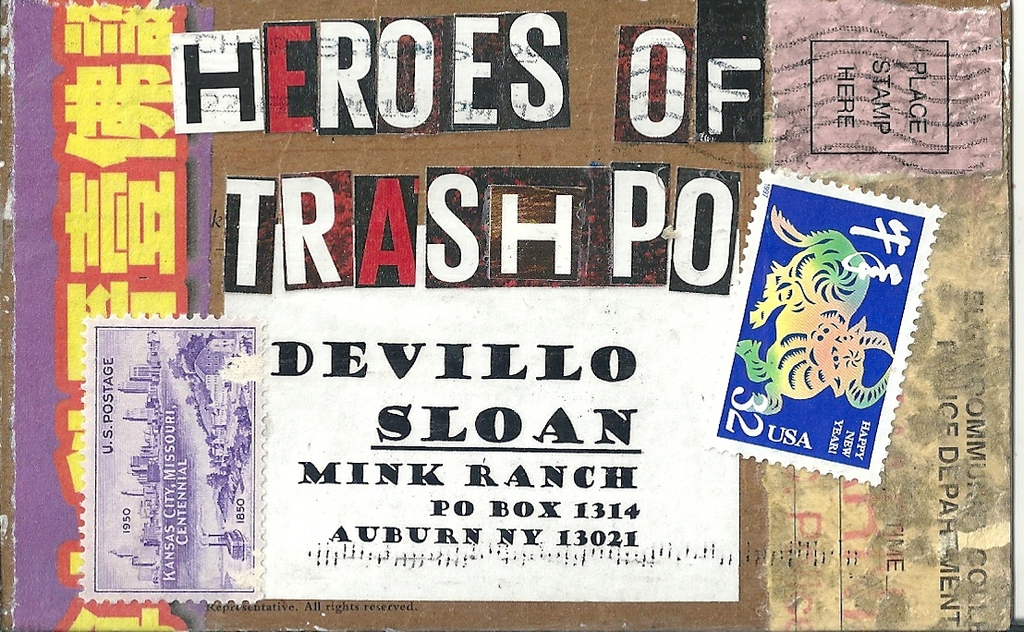 Here's one by Lucky Pierre that is one of my faves: It's memorializing Elgin, Illinois - home of DK.