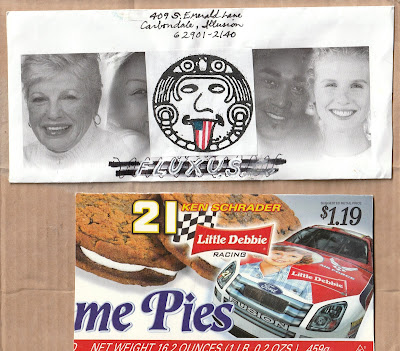 Mail art by Richard Canard (aka Richard C) (Carbondale, Illinois, USA)
January 22, 2020 - Being in a Richard Canard groove ourselves, we noticed that at IUOMA-Ning several bloggers and/or Litter Richard enthusiasts recently posted mail art with classic Fluxus images they had been so lucky to receive from the Land of Carbon Illusion.
And then we spied in the mass of material in our opened Richard Canard File an envelope with a similar Fluxus logo (didn't George Maciunas create this one?) that we had neglected to document. So here it is along with the envelope's contents.
We do this because references to Fluxus are - to our knowledge - rare in the King Richard canon. Many mail artists - especially some of the veterans - like to celebrate and live in the spirit of Fluxus, which is, after all, intimately connected to mail art.
Let us present a theory about Richard's consistent, minimal references to Fluxus. Richard C is a "true believer" and longtime member of the New York Correspondance School and, thus, the Ray Johnson circle. These days in the growing exposition on mail art history you will often find the (badly mistaken) assumption that Ray Johnson was a member of Fluxus. He never was, although - according to accounts I have read - Maciunas warmly endorsed RayJo's efforts.

The venerable Mark Bloch told me - via digital communication - that Johnson was, in fact, somewhat skeptical of the Fluxers and was "too much of an independent thinker to join that group" (a reasonable reconstruction of Bloch's comment).

For whatever reason, Fluxus items by Richard Canard (Fluxus Illusion?) are rare and a curiosity.