Dobrica Kamperelic (Serbia) died today, read the news on Facebook. This Group is made to share the news and to place postings to remember him. His Open World magazin was his life-work. 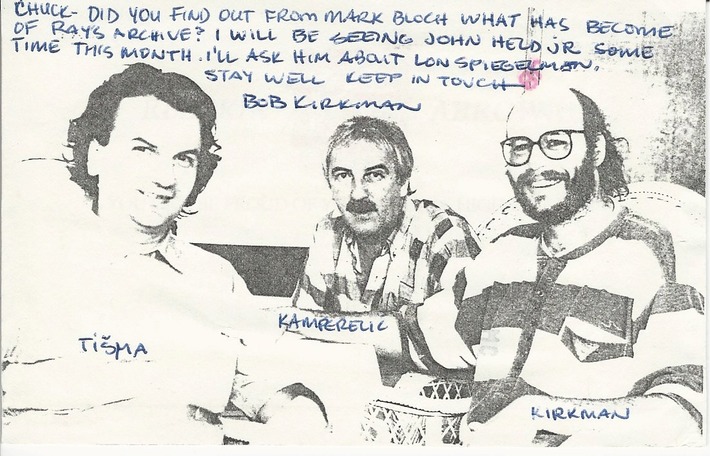 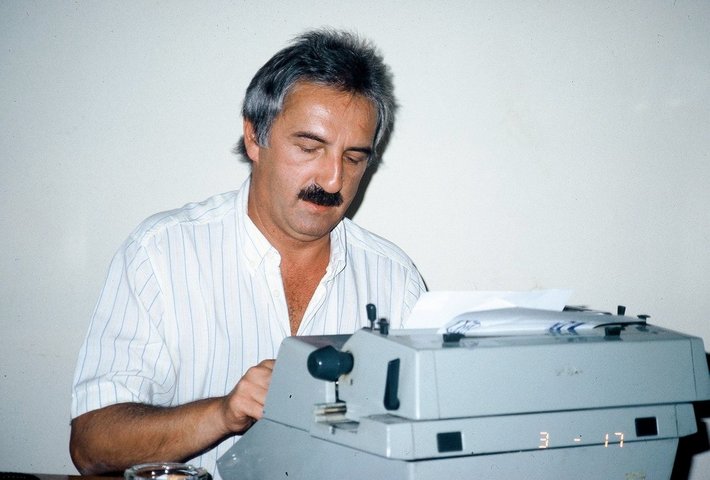 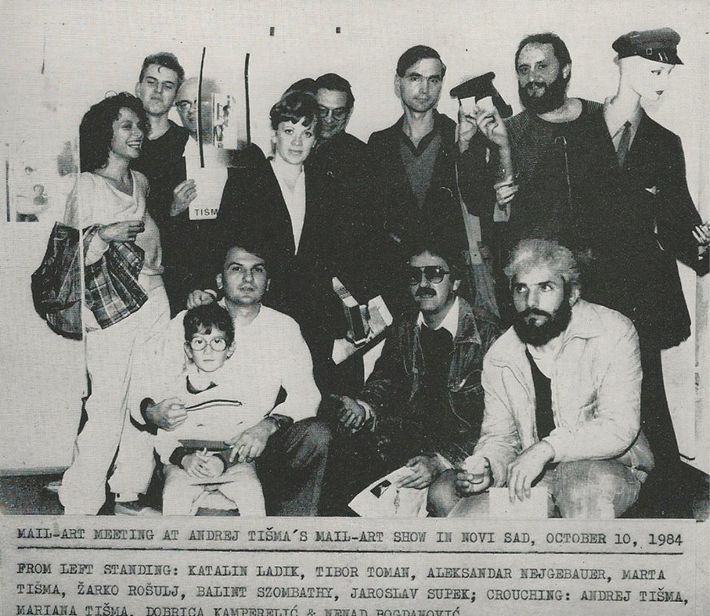 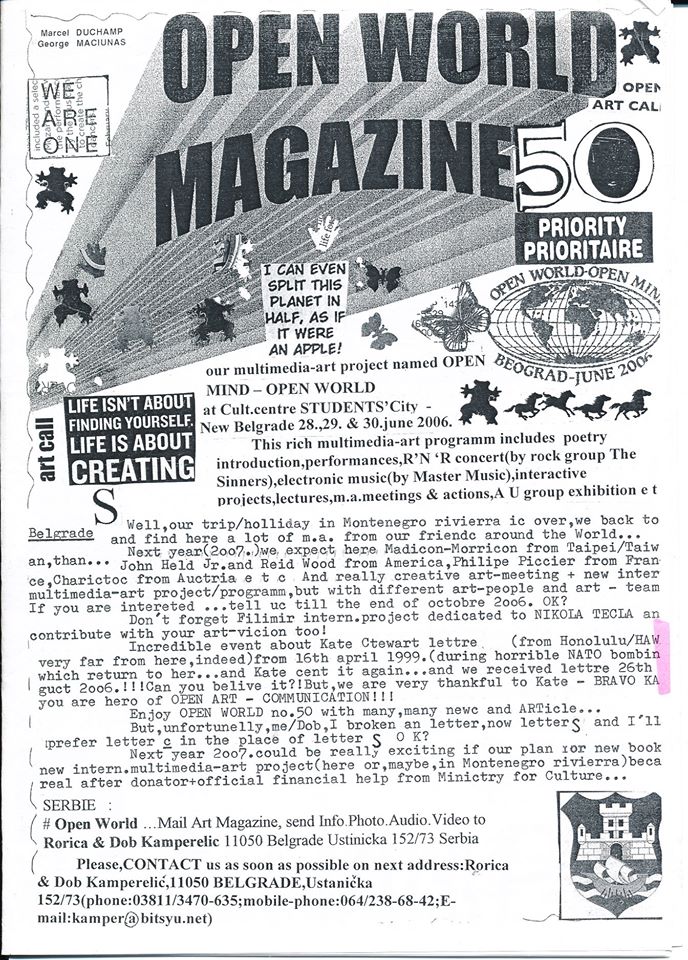 RIP Dobrica. His recent postcards to me, 2019. And text about them (published in my "Dadahomeya Review"). Hope he catched to read it...

Dobrica Kamperelic and his postcards

I am in the strong mail art contact with Dobrica from the late 1990s. Dobrica is one of three main organizers of mail art festivals in Europe. Another two are Peter Netmail (Germany) and Geert de Decker (Belgium-Spain). “Every friend of John Held Jr. is my friend!” – these were first words by Dobrica when we have met in the Belgrade airport in June 2004. These were great days of the “Metamorphoses” festival. Michael Lumb, Pig Dada, Stradada, Karin Meiner, Siglinde Kallnbach, Peter Netmail and other good mail artists and performance artists participated there. And, certainly, Dobrica’s “QUART” group – with goddess Jelica Obodjan.
Dobrica is artist with anarchical ideas. He sincerely tries to make world better. Every mail artist knows his “Open world” zine with a lot of good information about art events all over the world. In his style Dobrica is Dada follower, and it’s not surprise, because mail art is officially using heritage of Dada from Ray Johnson time. And here mail art is simply one of neo-dada movements flourished in 1960s. Another neo-dada movement is pop art, but interaction of mail art and pop art is totally unknown (as almost all related to mail art) – we know only that Ray Johnson and Andy Warhol were friends.
Dobrica uses different techniques: collages, rubber stamps, xerox art. These postcards are rubber stamped. They contain some erotic images, and it’s good for anarchic art. In some of them Dobrica’s wife Rorica is a model. Rubber stamp images have only two contrast colors: black and red, standard for rubber stamps. We can recognize some text labels: “Well done”, “Neo-neural network”. First is obviously parodic, second reflects nature of mail art network as second human neural network. Also we can find rubber stamp from Minden festival from 2002. And some specific for conceptual art characters: star, sign of question, quotes. One star symbol placed in the human head, and it’s typical for conceptual artists too. And, in the strong accordance to the Dada laws, we can see image of usual parrot. Composition of images is non-traditional, it’s rubber stamp collage – and I can see here soul of Kurt Schwitters.
So, Dobrica’s postcards reflect and interoperate ideas of classical Avant-Garde (Dada) and conceptual art. 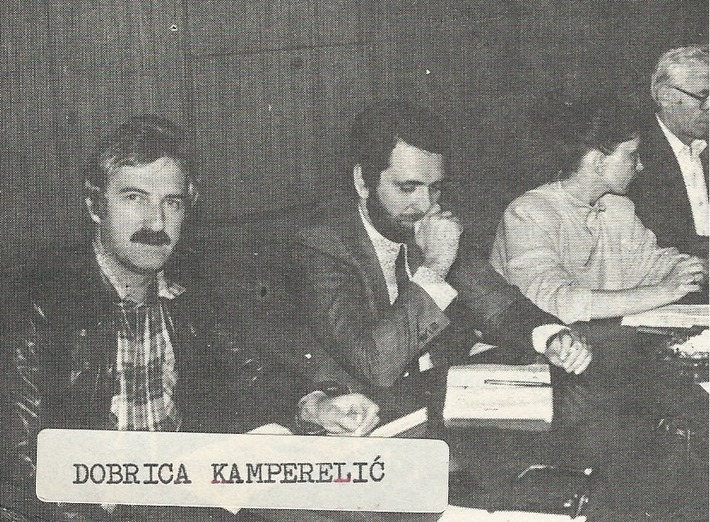 Death is like a silent owl awaiting its prey. That thought passed my mind this morning as I was awaking to the world relaxing with a cup of coffee. Outside my window I spotted a White Owl in the woods. Then, seconds later, I read Bill Gaglione's text on Facebook informing FB friends that the great Serbian mail art networker, Dobrica Kamerelić had passed away. I was stunned by Dobrica's passing. I never met him in person, but Dobrica was always someone of importance, in my writings, and art. This quote from Dobrica especially resonates with me: "I'm still believing in OPEN WORLD and I prefer friendship."

DOBRICA KAMPERELIĆ 1947-2020
Visual poet, performance artist, and mail artist, Dobrica Kamperelic´ was a leading figure in the Yugoslavian international mail art networking movement. Born in Beograd in 1947, Kamperelc´ pursued law at the University of Beograd. His first contacts in mail art were with Guy Schraenen, Henryk Gajewski, Ruggero Maggi, and the legendary Eastern Bloc conceptualists Robert Rehfeldt and Ruth-Wolf Rehfeldt. Kamperelic´ was active in creating concrete and visual poetry during the late 70s and he also pursued writing and painting. In 1979, Kamperelic´ was a collaborator of WESTEAST International Concrete and Visual-Poetry Association. From 1985 to 1996 he published nearly 100 issues of his international underground zine, OPEN WORLD. During the Balkan Wars in the early 1990s, Kamperelic´ demonstrated his opposition to foreign-imposed censorship of cultural expression. OPEN WORLD magazine was continually published in spite of personal hardships to Kamperelic´ and other Yugoslavian mail artists. In 2003, Kamperelic´ was president of the Expanded Media Art Section in Ulus and during that same year, his performance group KVART/SQUARE appeared in the 50lBienalle Di Venezia-Section EXTRA 50. In 2004, the International Center for Poetry Researches and Translation proclaimed Kamperelic´ among seven others as Best Poet in the World. Kamperelic´ organized many international multimedia art festivals including the International Expanded Media Art Triennial (2010). He had been a member of the Serbian Writers Association (UKS) and the Serbian Visual Artists Association (ULUS) since 1992. Kamperelic´ authored four books that range in subject matter from mail art to poetry. 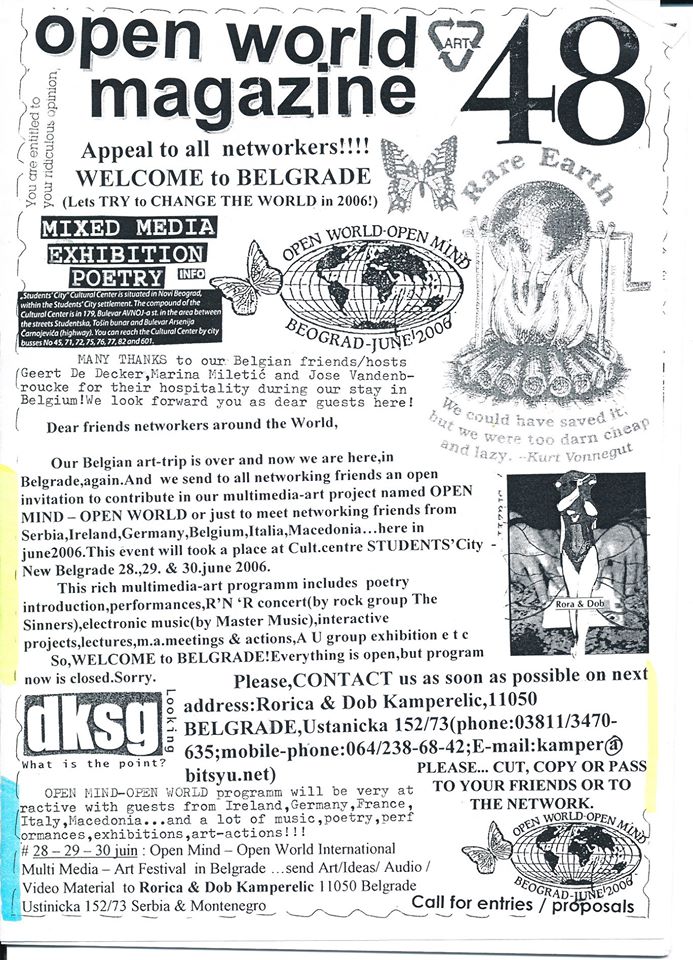