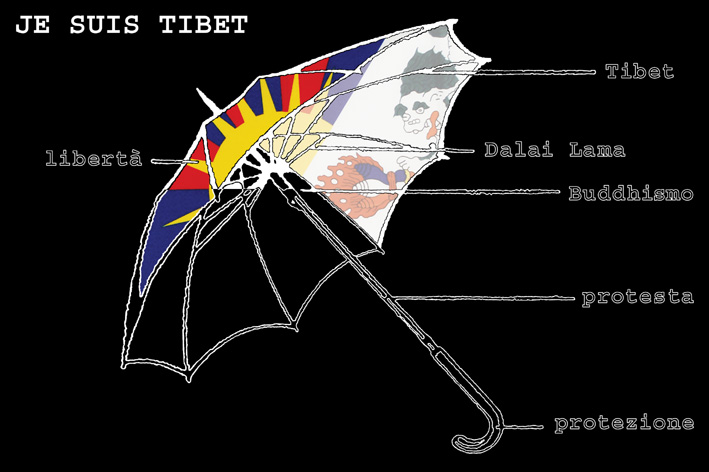 Under the Patronage of the Municipality of Venice

Dedicated to victims of the recent major earthquacke which has devastated Nepal, Tibet, Bangladesh and India.

Spirituality and Art as Food for Mind and Soul.

A new Venetian appointment with the Tibet Pavilion. The event under the patronage of the Municipality of Venice, parallel to the 56th Venice Biennial and this year in conjunction with Milan EXPO 2015, will be inaugurated on May 9, 2015 and will continue until August 2, 2015 at the suggestive Santa Marta’s Church.

Tibet: a nation that always evokes a religious, mystical, peaceful feeling, a vital, spiritual “unit” for all the human beings.

Tibet Pavilion, an idea that in its simplicity encloses a strong emotional charge, it is a dream that has left its mark, setting the goal of bringing together the sensitivity of the contemporary Western and the Tibetan cultures.

Tibetan Embassy with release of its Passport.

Year of the Dalai Lama. His Holiness Tenzin Gyatso, XIV Dalai Lama of Tibet, July 6, 2015 (the 20th day of the 5th month of the Tibetan year 2142) celebrates 80 years. Nowadays the Dalai Lama is not only the highest authority of the Tibetan people, but also a fundamental reference point for tens of millions of people around the world. The Tibet Pavilion Committee, the Foundation for the Preservation of the Mahayana Tradition (FPMT) and The Heritage of Tibet , as an act of affectionate and heartfelt tribute to the work of this high witness of our time, among others awarded in 1989 with the Nobel Peace Prize, have decided to dedicate the next Tibetan year to the Dalai Lama (2142, "Year of the Wood Sheep" which began on February 19, 2015 and will end on February 8, 2016), organizing within the Year of the Dalai Lama artistic events, spiritual teachings and lectures.

Tibet Pavilion highlights the combination of Tibetan Sacred Art and Contemporary Western Art and recently has been invited as a special project at the Biennale del Fin del Mundo, curated by Massimo Scaringella, in Argentina.

The many experiences of the past years have seen involved important contemporary artists who expressed themselves through the Khata, the typical white scarves that monks offer in a sign of solidarity and friendship, or through the art of the Tibetan monks’ Mandala composition or the Wheels of prayer that accompanying in the prayer the Tibetan Buddhists.

The third edition is dedicated to the umbrella, our loyal protector from the rain that in spite of itself was the protagonist of the Hong Kong’s students revolt toward the central government of Beijing. The umbrella emblem of protection and protest – two sides of the same coin – became container and support of artistic interventions and video art that made possible a large choral installation with works dedicated to Tibet, its spirituality, its symbols and its march towards freedom.

Freedom is like a work of art... it has to be created, shaped, modelled.

The invited artists have created their actions on the same base consists precisely by the umbrella, by its cloth, by its own structure, presenting umbrellapoems, umbrellaworks that like a great and unique ceremonial umbrella, one of the eight auspicious symbols present in the stupa (symbol of the nature of the mind) according to the great vehicle (Mahayana) of unlimited compassion and wisdom, will represent the overcoming of all suffering.

Tibet Pavilion has always been and always will be a purely artistic project, created to give dignity to this martyred people; but once again, it cannot refrain from showing its strong and determined outrage in front of the lack of interest of everyone toward this serious problem.

Problem that it is also presented at the exhibition “Tibet ... there's nothing to laugh” that I proposed years ago to Dino Aloi, great frequenter of ... artistic Buduar (almanac of light art, satirical monthly online directed by him) that, involving by care and intelligence, Italian and French artists, in presentation asks himself: How can you joke about Tibet, the nation that isn’t but should be. Have you thought about all the things happening there? Well infact, this exhibition would like to put a spotlight on things we are not usually informed about, starting with humoristic drawings, satires and caricatures, founding elements of democracy [...]

Tibet Pavilion as artistic project unites many “souls”: artistic, spiritual, cultural and, during the exhibition itinerary, two other initiatives will accompany the path: the photographic exhibition of Giampietro Mattolin “Amdo - the country of the XIV Dalai Lama” presented by Piero Verni: “Located in the north-eastern part of the Land of Snows, the region of Amdo is one of the most fascinating, magnificent and meaningful of the whole Tibet. Some of the major religious figures of the Tibetan civilization arose along these endless horizons: the great reformer of the 14th century Lama Tzongkhapa father of the Gelug School, the 10th Panchen Lama and the current XIV Dalai Lama native of the village of Takster.”;

and the exhibition constituted of a graphic deepening of the great illustrator Giuseppe Coco on the figure of Milarepa (1040 - 1123) the most famous and beloved of the Tibetan yogin and one of the greatest spiritual masters of all time. Chiara Gatti that presents the exhibition Coco & Milarepa - The colors of the spirit, writes: “On this occasion [...] it is proposed a cycle of works focused on a more intimate theme, dear to the spiritual side of his reserved personality. These are the plates dedicated to the figure of Milarepa, icon of the Kagyu School of the Tibetan Buddhism. An intense and magical figure that Coco investigated, between the end of the Eighties and the Two thousand, experiencing lysergic colours and powerful shapes, mirror of an existential reflection marked by great energy and suffering together. [...] A cathartic and eschatological trip that shocks the conscience.”

Saturday, May 9, opening day, will be present also Ghese Lobsang Tenkyong(born in the Eastern Tibet. He studied in the Sera monastery, obtaining the degree of Geshe Lharampa, the highest title of study achievable within the gelug-pa tradition) and Stefano Antichi director of the Foundation for the Preservation of the Mahayana Tradition (FPMT) of Genoa.

Artists of the exhibition “Tibet ... there's nothing to laugh”

Upcoming events, of which will be provided a more detailed program later:

June 7, 2015 Buddhist teachings by Ghese Tenzin Tenphel with theme: The laical ethics. How to pursue ethical, moral, kindness and compassion values beyond a religious formation.

June 20, 2015 Art Night Venice performances by contemporary artists and the dispersion rite of the mandala in the evening.

July 6, 2015 great celebrations for the 80th birthday of the Dalai Lama, the preview presentation of the book “Tulku the mystical incarnations of Tibet” by Piero Verni and Giampietro Mattolin and some intense artistic actions. 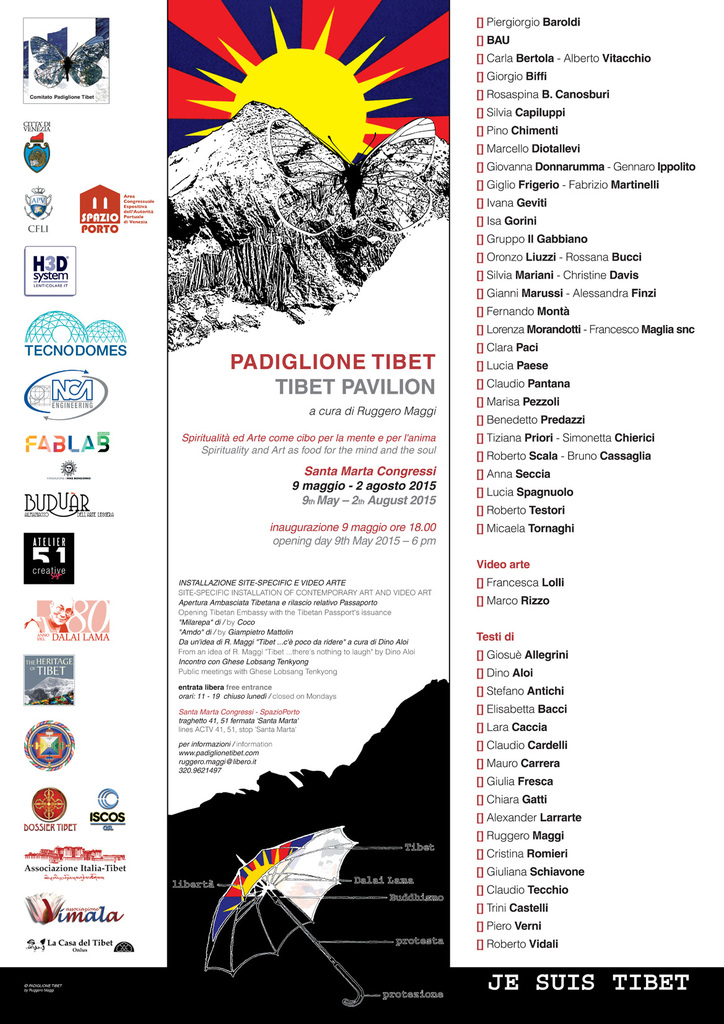 . The FPMT (Foundation for the Preservation of the Mahayana Tradition) is an international non-profit organization founded in 1975 by Lama Thubten Yeshe. The Foundation is dedicated to the transmission of the Mahayana Buddhist tradition and its values in the world through teaching, meditation and community service. The FPMT Italy belongs to this international network consisting of Buddhist centres of teaching, meditation centres, retreat centres, monasteries for monks and nuns, publishing houses, hospices, care centres and other community service centres.

. The Tibetan civilization was of great value, undeveloped in terms of material progress but incredibly improved from the point of view of an interior and philosophical research. The Project The Heritage of Tibet derives from the awareness of an urgency help to preserve Tibetan culture trying to contribute with its modest energy to the knowledge of the essential elements of what was effectively called the “The Tibetans’ Message”.