COCK-A- DOODLE OOH.... A MAN WHO SUFFERED FOR HIS ART

A South African performance artist who tied a live rooster to his penis during an impropmtu open-air show near the Eiffel Tower was found guilty yestderday of 'sexual exhibitionism'. However, the Paris court did not impose a sentence.

Last September, Steven Cohen danced on the French capital's Trocadero Plaza dressed in a corset, high heels, long red gloves and an elaborate feathered head-dress with a rooster attached to his penis by a ribbon.

Under the amused and perplexed gaze of tourists, including a group of nuns, the spectacle lasted only a few moments before police arrested Mr Cohen, dragging him across the plaza rooster attached.

Agnes Tricoire, Mr Cohen's lawyer, said she was 'relieved', adding, "This is a rather measured decision. In my opinion, this case should not have gone to court."

In a March interviews with 'le Figaro' newspaper, Mr Cohen said the authorities had "no understanding of what art is, what perfor:ance is."

"If I'm found guilty...I will see it as a failure of French justice, " said Mr Cohen who has lived in the county for about 10 years.

Permalink Reply by Susan McAllister on May 6, 2014 at 8:46pm
Well, I'm sure we all have been wondering what the Artist in Seine has been doing with all of his free time. Perhaps?

Susan: he ran the Paris Marathon last month, and....

Erni: where, and equally impirtant, how, did you find that incredible picture?

(Where is the In Seine Artist: we need him at a time like this?!)

Hehehe..makes one proud to be South African...

Petrolpetal: why does it make you proud to be a South African? What do you lot attach to your bodies for your performance art displays (send photos, please)?

Well, if the rooster was not harmed, I don't mind.

I am intrigued by the supoosed 'impromptu' element of Steven's defence plea.

"Well, your Honour", said Mr Cohen's lawyer, Mme Tricoire, "My client was just wandering around Paris in, as we have heard, his usual apparel of a corset, high heels, long red glothes and an elaborate head-dress -- with of course the rooster and a ribbon -- when this idea came in to his penis head: "I know what: I'll do an impomptu performance for all the nuns & tourists -- OK rooster, let's go!". It was, your Honour, nothing more or less than, as I have argued, an impromptu performance."

Mr Cohen declined to elaborate on what was 'measured' about his performance. The rooster was still unavailable for comment

In the end he was let off without a fine as the passing nuns didn't complain. 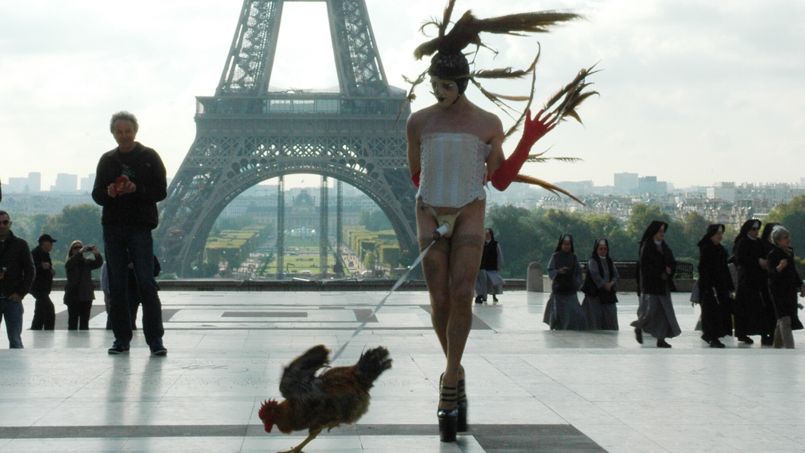 Great photo in Seine/Insane! Thanks