Have you ever received mail for someone you don't know?We are making a short dark comedy film inspired by the wrong mail. Eduardo Munez tells the story of a man on the edge.... And a LOT of letters!
The original crowdfunding campaign for the film was funded by 104% on December 6, 2015 (But you can still contribute!). But still we need to collect letters from around the world for use in the film as props. We are looking for mail artists and snail mail lovers to get involved in our project by sending us letters which we can feature in our film.
We are looking for letters, particularly drawn envelopes, mail art and plain envelopes - not postcards. We will have to change the real addresses on the front to the 'fake' address of the character in the film so please leave the address section fairly clear of decoration.
In our film the letters to Mr Eduardo Munez do not get opened - so inside you can write whatever you like. You can use your imagination - who do you think Eduardo Munez is? What kind of mail would he receive?
Once shooting on the film is completed we will video the team opening all the letters we have received! We'll provide everyone who contributes with a password protected video link to watch them all being opened. All letter writers will also receive special thanks in the credits too... Please, be sure to write your sender details on the back of the envelope as the letters will not be opened until after the film is completed! With each letter's writer's permission - we will also publish them on our film Facebook page and our blog.
The address to send your mysterious mail to is:
Mr Eduardo Munez
272 Waterloo Street
Newcastle upon Tyne
NE1 4DJ
UNITED KINGDOM
Deadline: 30 April, 2016
If you'd like to ask any questions about the project, please email: ruthtapp@hotmail.co.uk
Fell free to spread the word!!

RSVP for The Eduardo Munez Letter Project to add comments!

Comment by Ruth Tapp on March 26, 2016 at 5:12pm
NEW DEADLINE: We can now accept mail until April the 30th 2016. So if you were thinking of writing to us but thought you didn't have time - you do! :-)
Thank you to all those who have written to Eduardo so far - we have collected some amazing letter props! They are going to look fantastic in the film! :-)

Comment by Ruth Tapp on March 20, 2016 at 1:18pm
Hi Jade - I am the writer of the film. So basically we are collecting letters from all over the world to use as props in our film. Our film features 100a of letters and we thought it would be a lot nicer to have real ones rather than 'fake' props. The letters are not opened in the film allege see in it are the sealed envelopes so inside you can write whatever you like. We will be holding an Opening Ceremony once we have shot the film to open all the envelopes and look at their contents. Have you seen our blog? There are more details on there...
http://www.whoiseduardom.blogspot.co.uk/?m=1
If you have any specific questions please feel free to email me on ruthtapp@hotmail.co.uk
Hope that all makes sense!

Hi I am interested in getting involved, but I'm not 100% sure how it works? Could someone enlighten me please?

Comment by Ruth Tapp on March 18, 2016 at 5:58pm
Thank you to all those who have sent us mail so far! Eduardo's mail box is looking amazing. We can continue to accept mail posted up until the end of March as our shooting dates have been pushed back. So if you are thinking of writing to Eduardo you still have time. As long as it's in the post in the next couple of weeks then it will arrive in time for us to use. Thank you again to all those who've taken part so far. :-)

Comment by Ruth Tapp on March 1, 2016 at 11:45pm
Thank you Katerina! They have arrived safe and sound and are on our blog!
http://www.whoiseduardom.blogspot.co.uk 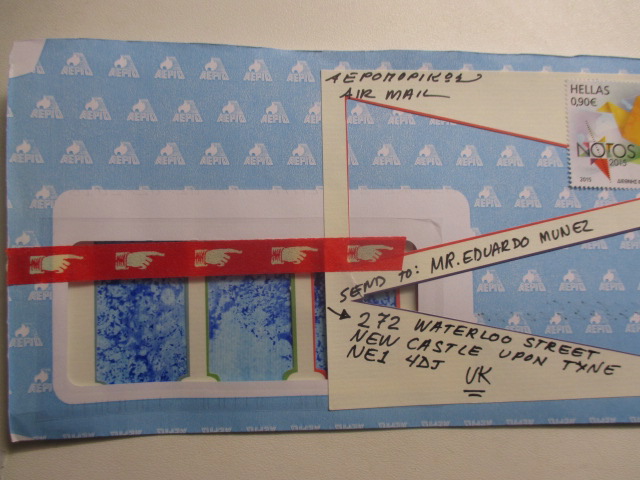 Comment by Ruth Tapp on March 1, 2016 at 11:09pm
Hi there - I am the writer of Eduardo Munez and the person running the letter project. Thank you to all those who have sent letters to Eduardo so far! We have an incredible 225 letters now! Please keep them coming - we really will use every single one! If you want to ask me anything about the project please feel free to message me.

Extended deadline for the project: 21 March.