my REAL wall residency at the Real network in The Royal Opera Arcade Gallery, London

I've been given a public space to display mailart at a new mail project that's opened in the very centre of London. The project is called Welcome to Real, and bills itself as the first network to be run by post. Regular readers of my REAL wall may have a little something to say about that...

Anyway, the idea of this project, sponsored by Royal Mail, is that they have a public display space in a pretty prominent place in the centre of London and they are giving a number of lucky folk "plots", which are little pieces of space to display stuff that is to be sent in by post. I've been given plot 45 to display in and I shall be running my REAL wall at that address until the end of the show, which runs til the 27th July.

I shall be doing a retrospective/live performance of my REAL wall, showing all the awesome stuff I've been sent over the years. You of course can take part and fill up my plot too, just send all your mailart to me this month at my plot address, which is...

If you've sent to me in the past, keep your eyes on www.myrealwall.comand http://www.welcometoreal.co.uk/plot/plot-45/ to see if your post makes a reappearance and if you're sending in you will definitely make an appearance!

RSVP for my REAL wall residency at the Real network in The Royal Opera Arcade Gallery, London to add comments! I've decided to use the Real network mailart project to run a retrospective show about the history of my REAL wallso far.

This first piece shows my decision to quit facebook and the small number of comments I received, which mainly suggested that living without facebook was not possible.

I went a year without it and in that time my life changed irreversibly for the better... The idea here was to create a piece that conveyed the potential that I felt that my REAL wall had in the early days. I knew that the idea of sticking posts on walls was a great idea (heck it worked for Facebook!), so even though the wall wasn't getting any post I still soldiered on.

To convey the feeling, I created a blank wall by using a glossy piece of laminated wood salvaged from my next door neighbour's garden. I sawed this so that it was a nice size to hold and cleaned it up a little, before taping the edges.

The blankness of the wall and the invitation to write on it, complete with pens is designed to simulate and stimulate that creative urge I felt and still feel to fill that blank canvas with stuff!

I do hope loads of people do send in their statuses, and I've created a page on my REAL wall to display them all when they come in. 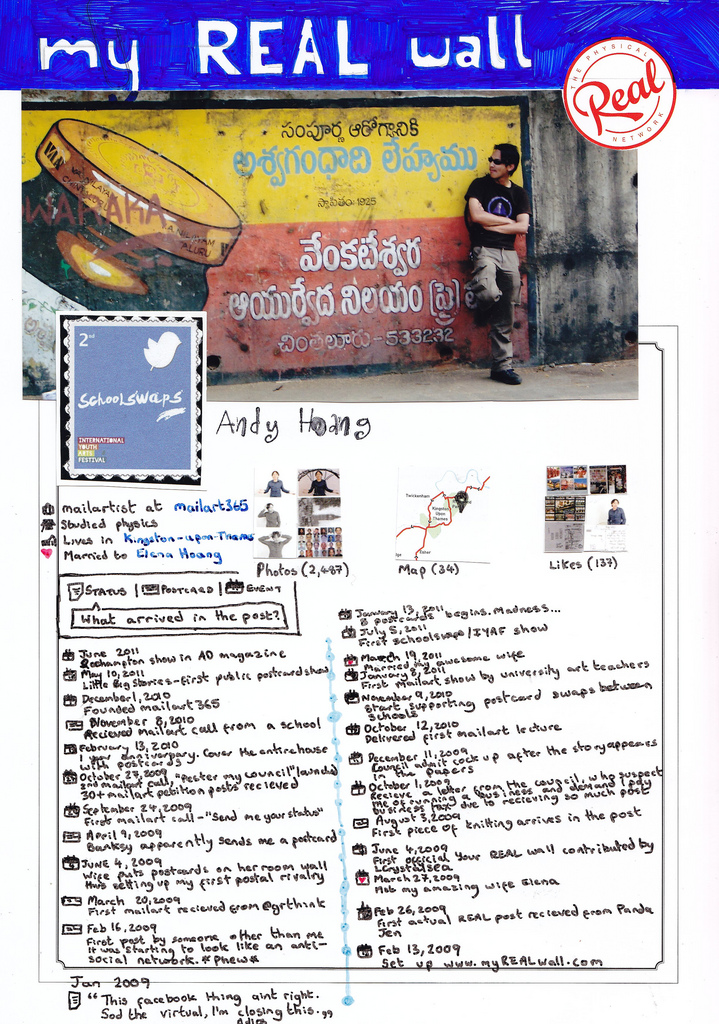 Day 1 and post in from me, Lorraine Kwan and Valentine Mark Herman to plot 45. 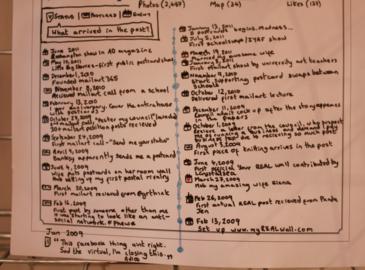