I always think of Z at the back. The end of the alphabet. The lonely letter with the fewest words. I think Ruud has managed to change this with his Fluxus words. If we made a purely Fluxus Ruud Dictionary – I think Z is coming up top? ZALOP now has a series of variations:

ZALOP - the original Fluxus word given by Ruud meaning - ABSOLUTELY NO WAY DEFINITELY NOT NADA NIX.

ZALOPU -  A particular tone of ZALOP - the tone of NO WAYS!!!

ZALIP - This word comes with a warning - ZALIP is a doppelganger - a usurper of the true ZALOP - he inhabits his own high rise in ZALOP City from  where he intends to take over the World of Emphatics.

ZALOPAS - Negative Determiner of ZALOP - when NO is used to deflate or break down. When NO will be taken as yes by the hearer.

ZALUP - a new word given by Ruud last week here determined to mean:

No longer – ie – something that used to be but now no longer exists – a ZALOP vapor. 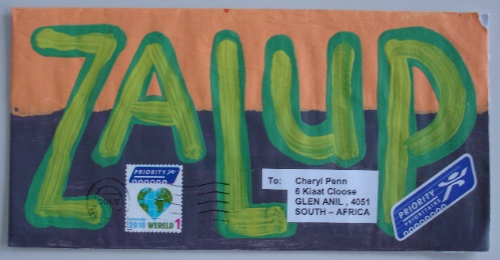 Hey Marie - good to see you here - I didn't realize no could be said in SO many different ways until ZALOP :-) X

I would call cheril a zalopogist. Especially when she analyses any zalop movements that are happening worldwide now.

I think I am quite a Zolipist myself.... regardless, fab envelopes again and kudos to you Cheryl for keeping up and adding to the dictionary day after day!!!