Last weekend I attended my first Mail Art exhibition! It was held in Mount Barker, a very charming and supportive arts region in the Adelaide Hills. Such a cute gallery, it used to be the original General Store from the 1800s.

OK, let's get to the AAAART!

The asemic guru, Mr Tim Gaze, was the most hospitable curator of this show, and in his opening speech he gave the crowd an informative overview of mail art. Before the speeches I said that I hated talking in front of people, and he told me that he did it often and was quite used to it. Can you believe that he questioned me and made me answer questions during HIS speech? He called me a 'professional' mail artist and then I was forced to explain to the enormous crowd the whole Brain Cell theory, as well as explaining my mail art history and the goings on at IUOMA. (I didn't have any alcohol, so no IUOMA secrets were divulged.) 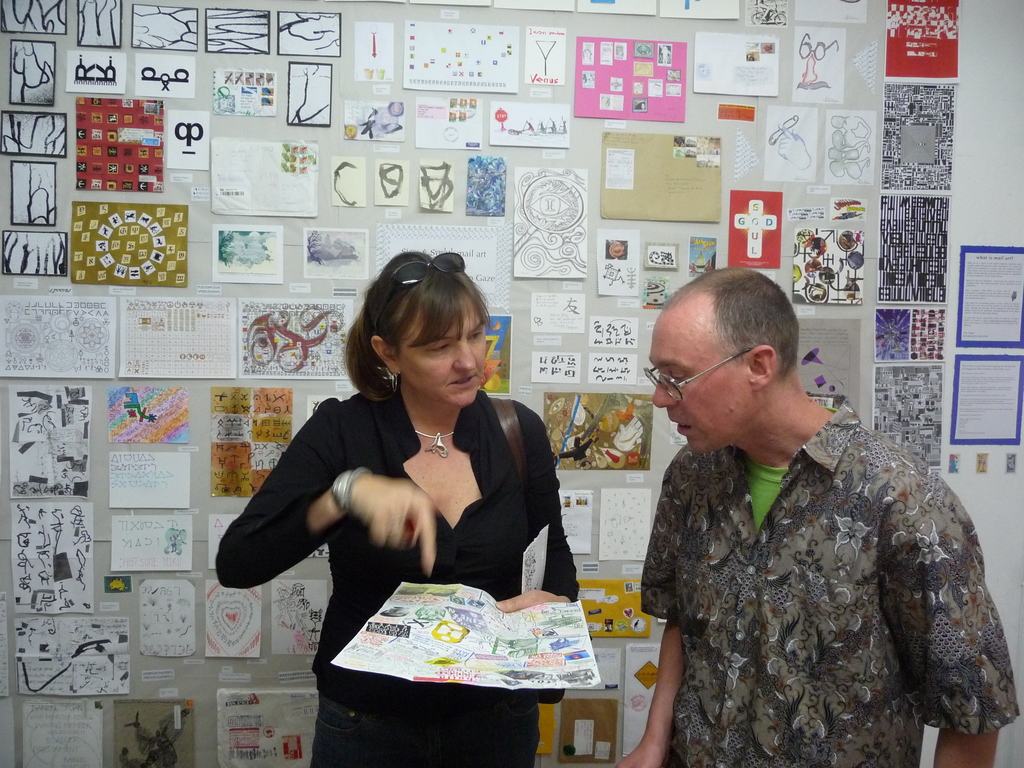 Above: Vizma and Tim discussing Brain Cell, which he thought it was an Add and Pass.

He actually found my address via Japan, and wrote to me asking to contribute to the show in the final week, which I did, and more meetings are planned in the future. It was great to see lots of Aussie mail artists that aren't in my personal network too. (I stole many Inkovia stickers!)

To sum up, it was great afternoon, and if you want to see more I'll be adding more detailed pics in the Photos

Thanks for the comments, folks.

It wasn't my exhibition, Chris, all I did was send an envelope and attend the show!

loved to read your story!

Good to see you here. I have just joined a week or so ago.  Your exhibition looks great.  Chris.

Comment by Suus in Mokum on October 17, 2013 at 6:39pm
Our own MailArt IUOMA Ambassader Vizma in Australia! Proud of you! What a shame Mount Baker is on the other side of the globe. Distance-wise that is... Nothing wrong with being down under and such and so.