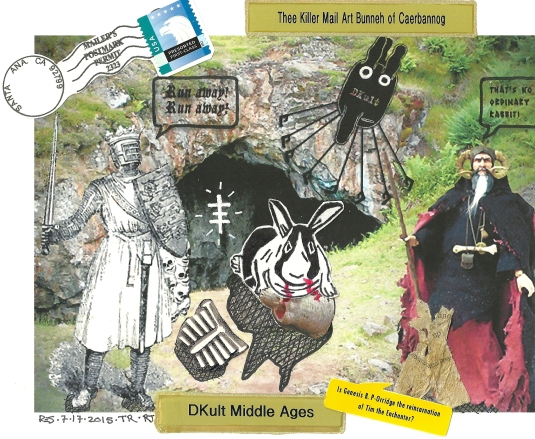 “Trashpo has no future, only a present.”

July 31, 2015 - Of course the reigning Queen of Trash Diane Keys never said that; it is a reworking of a quote appropriated from Ray Johnson and altered. The fraudulent quote is, however, an authentic example of the “collaborative narrative” that drives DKult as a mail art activity.

res, a gifted network newcomer who seeks to stay under the radar on the internet (thus the lack of personal info), took to the DKult collective narrative like, as they say, a duck to water with this wonderful, large collage she sent me. In a kind note she informed me: “The center bunny stamp is by Tammy Riggins. She gave me permission to reuse it.” So both res and Tammy Riggins have contributed to the lore of DKult.

I am always thrilled to see new artists who are not “insiders” contribute to the DKult narrative. Trashpo is a form of visual poetry made with found material. That requires little explanation and anyone can do it. DKult, I gather, is more mystifying to the uninitiated. Really, it is the equivalent of one of the many mail art fan clubs built around people, objects, activities, etc. For instance, the IUOMA has a Richard Canard Fan Club as well as a Moan Lisa Fan Club. We might have called it the DKFC (Diane Keys Fan Club) only it would be associated with fried chicken and The Colonel (just joking).

DKult differs from a regular fan club due to the “collaborative narrative” where any participant can – in any way they want – contribute to the story of the past, present and future of DKult. This experiment has been going on for five years now with spectacular results and many, many contributions. Unfortunately, the narrative has become so complex, convoluted and contradictory that it is nearly impossible to follow. That probably contributes to the current state of confusion. We have a huge cast of characters, some actual people, some fictional, and some – we are not sure.

res does blaze new trails here, taking DKult back to medieval times. No one has done this before. We have in other DKult narratives references to the Roswell, New Mexico, UFO crash in the 1940s and DK’s psychic ancestors in Russia at the time of Rasputin but nothing further back, as far as I know. We have a clandestine organization named T.O.X.I.S. bent on the destruction of DKult (for some reason) and a place in Mexico called The Clinic where maybe you have been but do not remember. res has also created a work dense with arcane symbols, anachronisms and floating signifiers, which all are staples of the DKult narrative. It is a great contribution.

Deepest thanks to res and Tammy Riggins!

The res-solution will be televised.

Thanks for the great m-a, res. This is the first work I've received from you, and I didn't get into much interpretation about what you are adding to the narrative. I see the piece as being built around Monty Python and the rabbit, but you have other things going on as well. I had meant to mention the Genesis P Orridge reference, as that name comes up a lot at IUOMA.

The blogs are a good place for sender/receiver dialog. Feel free to explain anything that might be helpful. The artist's input can be invaluable.