I wrote a huge lot and the wind has arrived and is sweeping all my words into the Ether - so I'm afraid you'll have to make do with images from this work I have been very remiss in posting. But I'm claiming the 1000th amendment. Overprinting is a favorite technique of mine - it adds complexity and multiplicity of readings. I'm not certain if this is a book or not.  All definitions of MOST things have become so elastic I guess it is :-) - so its going into the library. These pages were intended as a contribution to Mail Art Makes the World a Town Zine. But luckily for me, they came bound as a book. So they're going to remain a book - they're NOT being seized from their home and disseminated through the world. Pal as most of you know is a great maker of artists books. Expressionism at its best.

I am often struck by recognizable signature work I receive - signature work as in high levels of expectancy on my part and recognizable style from an artist.  I have not received much mail art from Pal but he has participated in a few book projects. Clarity of expressive gestural marks is one of his signatures. Told you I'm lucky!  Good work immediately reacts with me in a "how did he/she do this? I want to do the same!" I certainly got that this time.  MANY thanks Pal :-) X In the 'old days' (dates remain unspecified just in case someone remembers them correctly) men made books. They held onto them and would not let the general populace even TOUCH them! The masses were ignorant and that suited those in dank and drafty castles. Books were chained to pews and people fell off the edge of the world if they sailed to the horizon. But this is another time.  Contrary to the dark ages, this book has been handled by one and all on its way from France.  It was not even envelope enveloped.  I've told you before Dean has friends in high places. I opened it - and as was intended by the artist inseine, turned and turned the pages and the book around wondering WHICH WAY IS UP??? Dean perfectly demonstrated one of the fundamental dichotomies of  artists books - they are intended to subvert the traditional book.  They are intended to question the way we read.  So how do you read this?

Which way is up - or down? Which IS the right way up? After all, in a 24 hour period, SOMEONE gets to be upside down at the bottom of the world - and they don't fall off.  They remain gravitationally intact. As do the images in Deans book. Its year end and somehow this book arrived at EXACTLY the right time to ensure that my overloaded brain realized yip, this is a time of ordered disorder.  That nothing is at it seems - Gremlins lurk at every turn, WAITING to disrupt.  Just in case there was insufficient horizontal disorder, Dean made certain the viewer got his message - he interfered with the vertical plane too - for good measure. So are you confused? You should be - and so Dean meant us to be. I ALWAYS expect a quirk from Dean and he never fails to deliver. I think its got to do with too much time cycling in the South of France.  His book titled Order and disorder does not fail to impress.  Time to take up book art Dean - no more ducking the issue - you achieved a thoroughly provoking work.  Save up 10 cards to me and send another book! 1985? Thats nearly the Dark Ages... Interesting information tweak - one wonders if postal clerks even LOOK at the validity of stamps used? I've received many packages with the cancellation of artiststamps - that in itself of great delight to their creators :-) X

Cheryl, I forgot to mention that the stamps are from 1985 and are in French Francs.  I guess they still worked.  What a risk to take.

PS thank you all again for the kind words about this piece, I think you are all not knots.

The point is definitely great blog. CPSA - the crown was added later. Your are The Queen of the Zine.

O - Thom - yes - thanks for stopping by - Pals use of paint is very skilled - successfully  expressive within the confines of what is a relatively small surface :-) X

Good job to have an existing audience for all this wonderful work - so I'm making full use :-).  Dvs, I have NOT surrendered my crown - o - oops, I see I've lost it - peeps or no peeps X

Wow--super creative from both artists. Impressed with Pal's paint!

CPSA = Big Sister of MinXus. Now has Amnesia! Say "Who are THOSE peeps?" 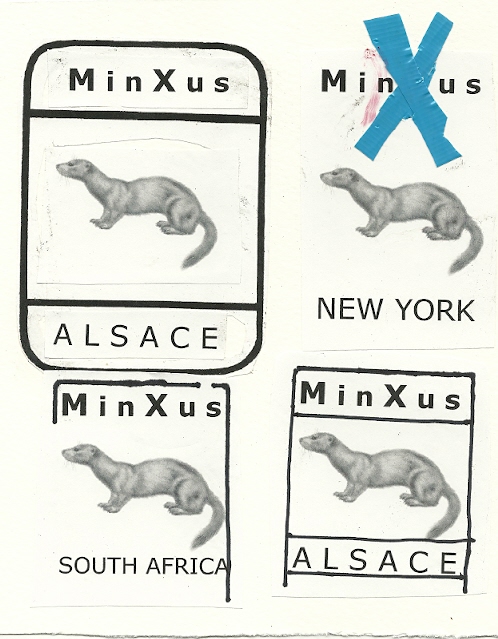 Claire dont fret - when its ready, it will be ready - thats that - books have a life of their own. Nadine - with you there :-) X