state of the mail

In case this may be of use or interest - I found that the auction site Delcampe has a dedicated Virus page that lists various countries together with a brief description of the state of their snail mail and links to their postal authorities sites.  I followed along to Royal mail and they have a long list of countries updated every day. Russia is listed as closed for business and Germany listed as #problematical' but Spain seems to be open which surprises me given the news from there.  Most…

I haven't sent out much recently so I haven't expected a lot to arrive but I have here a nice little pile of goodies from Carmen Kennedy. Katerina N. Bonniediva. Charlotte Geister. Mark Sommerfield. and  Reed Altemus.  I will post some scans later.   If I can manage to get things posted I will do.  There is a rumour of something big happening tonight so maybe runs to the post office will be banned.  Wait and see.

First, from Cascadia, a sheet of his Ticket project stamps.  He very kindly used my contribution on his envelope so I illustrate it here as unique . . . A question for the faithful

I have just woken myself up from a bad dream.  I don't know quite what time it is but it's still dark out so I guess 'early' will do.  I suffer from dreams a lot. yhis was a dandy and I have been left wondering just how many people, out there in the Eternal Network, really find mail art sustaining to the spirit and an encouragement?  Or is it all just a distraction, putting off the inevitable??

I was wondering which, if you came across a Genie who could move mountains and make…

It is Autumn and England is grey and damp.  That's part of its charm, I suppose, but it can be a little wearing after a while; so when the postie struggles to deliver a great slab of Italian mail art he is the most popular person in my world.  This week he delivered a monster.  i don't think I have ever had such an envelope arrive unannounced on my doorstep and it is going to take a week or two to digest its contents.

This week I received a parcel from Roberto Formigoni.

This oddity arrived a week or so ago.  I nothing of it other than, giving the recent posts about the presence of money in the mail art universe, I thought it might be of some interest.  All the 'artwork' is copies; for example the 'hello Mary' collage has my name written on a label stuck over the original.  The 'dedication' at the top of that sheet is also a label stuck over another name.  None of it inspires me to take advantage of the offer and send money for the book but I give the…

Last night I saw a picture pinned up near someone's desk.

It was a marvel.  A4. There was a great spray of oil gushing up over a desert landscape.  An ecological comment?  Energy. The violence of a new discovery perhaps and also the excitement.  How had the effect been achieved?  Black ink sprayed over a semi abstract landscape?  Perfect composition.  The hand of an undiscovered master?  I went closer - took a better look . . .

A rather poor colour photocopy of a photograph -…

Blog Fourteen; A word of encouragement.

The good people of the Hannah Hoch's Fan Club Group here on IUOMA have a little project underway and nearing something like a deadline.  It would be nice (for us at least( if a few more people joined the party; perhaps (I am a Brit after all) a few more Europeans to even up the score?

A list of participants can be found on the group posting if you care to drop by.  Don't be shy.  It may even introduce you to a whole new world . . .

I am fairly certain that most of the people who will read this will be American or at the very least non-British and therefore it will be a completes mystery to them but I am British and the last thing I would do would be to complain.

No matter how disappointing the restaurant meal, no matter how rude the shop assistant, no matter what nonsense the man on the phone throws at me as an excuse, I can't complain or if I do, I suffer.

A fortnight ago I mentioned,…

A new British chum, Jennifer Wallace, sent a fold-out collage and a similar item arrived anonymously from Norway (according to the stamp).  Hopefully fold-outs are going to be the new craze.… 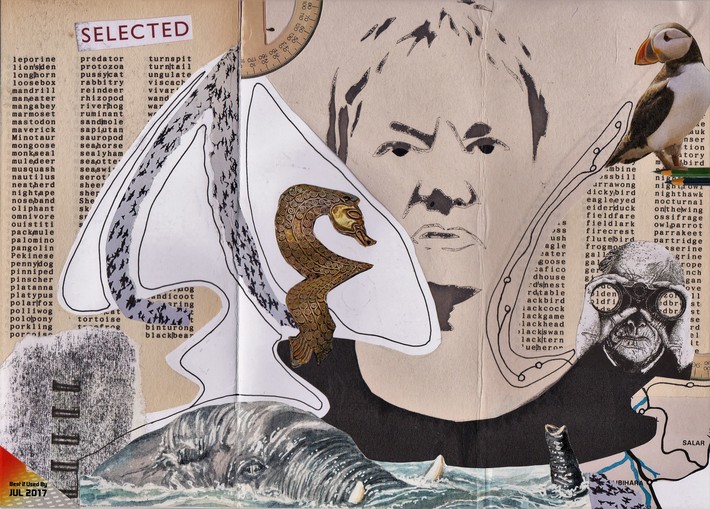 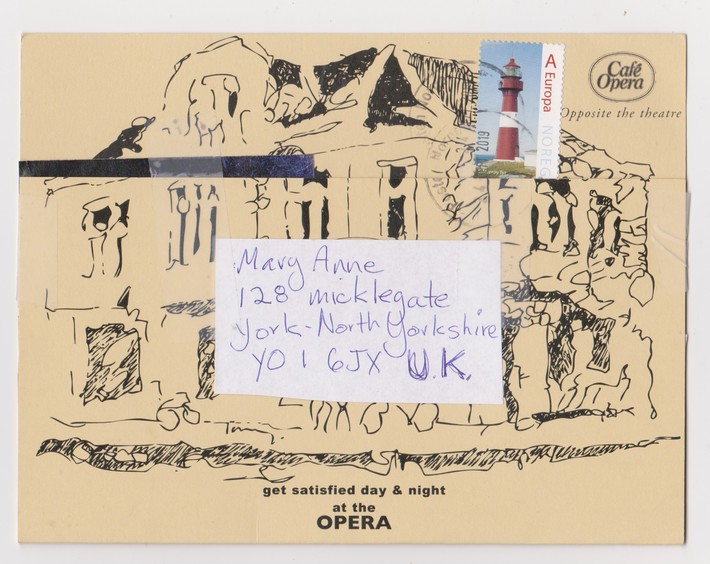 An Embarrassment of Riches

Here we have a selection of wonders from the large accumulation of new arrivals that now litters my work space.

First, an envelope from Mr Felter brought many stamps, cards and what-knots including a beautifully printed stamp the size of a page that really deserves to be framed rather than buried amongst my artistamp collection. I show the envelope here as it also came with a goodly selection of Leonard Cohen stamps that go to prove, once again, that the established postal authorities…

Eleventh Blog: an explanation (of sorts) for all this rubbish . . .

I didn't have much of an education.

Our family led something of a peripatetic lifestyle and I was in and out of this school and that; sometimes with long gaps between.  My first employer insisted we all attended college - day release it was called - and there we had three compulsory subjects: English (taught of course by a Welshman), British Constitution and Social Economics. There was space on the timetable for one other subject and so, with some misgivings, we were all enrolled in…

So I am not a great one for creating on the computer but I've been waiting for collage to dry (again!) and, having nothing much better to do, found myself playing with ideas for the documentation for my 'Stamps for Yoko' project.  I found an image of an old poster (thank you google images) for one of Yoko's exhibitions and, working under a sudden inspiration, I have altered it a little . . .

What to do with it now I wonder.  The best I can think of is posting it here where it may…

of some asemic interest maybe . . .

Last night I found myself watching a Sci-fi film on our (British) TV.

The film (2016) was named 'Arrival' and the story such as it was concerned the arrival of alien ships and an 'expert's' attempts at understanding their written and spoken language.  It was quite a gentle film and I think maybe anyone on IUOMA interested in asemic writing would find it intriguing . . .

The postie has just brought me the first half of the documentation I am doing for my on-going 'Stamps for Yoko' project (yes it has a fancy name now) and it is slowly turning into a thing of small and modest beauty; you could say, rather like the lady herself!

I can hardly wait to finish it off and send it all out but patience is a virtue (I am repeatedly told) and there is still space for a couple more designs to be included.  Any takers?

Blog number eight: Strike or not

I really ought to have put some thought into this posting but it is a spur of the moment thing and maybe it will be the better for it.

Hard to miss the Global (whatever that means) strike being called for today to draw attention to the vast problems facing the world's equilibrium.

I imagine that most people involved in the Eternal Network are to some extent sympathetic to the causes and have an awareness of the difficulties involved in 'climate change'. yet I can't help…

I have a great liking for artistamps and keep any that come my way in a set of four albums.  Luckily the standard size spring-back album, although a little old fashioned, is just the right size to accommodate full sheets, as well as pages of individual stamps, cards and envelopes,  so the whole thing gets to look better and better with each passing month.

Amongst the pages is this one full, not of artistamps per say, but of imitation air mail labels.  I wish I could find more as they…

Blog the sixth: A cascade from Cascadia

I have had a sudden windfall - an embarrassment of riches from the  Postmaster General of Cascadia - enough to warrant a whole blog though I will only post a few images, partly because I am sure most of the stamps and cards will have already been noted and partly because I would rather be away from this infernal machine and busy on more mail.

First, I will post the envelopes because I think most stamp designers (or other mail artists too I dare say) have an interest in seeing how…

Bruce Grenville sent so many sheets, stamps, first day covers, announcements of issues and heaven knows what else that I don't realy know where to start.  Mark Valentine sent an explanation in a booklet.  I may soon need a bigger suitcase!… 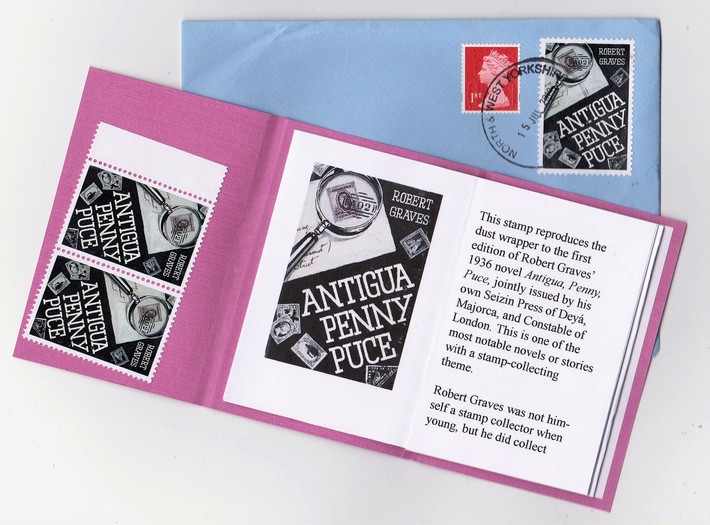 Sorting through the pile of welcome mailart, I find several clusters of artistamps, and it occurs to me that this might be a good time to introduce my Artistamp Projection.

Some years ago, a chum gave me an old spring-back stamp album and I decided to use it for all the artistamps I had accumulated.  the idea (I call it a projection because it is part art project and part stamp collection) now lives in a small suitcase and includes four albums, stockbooks, bundles of envelopes,…