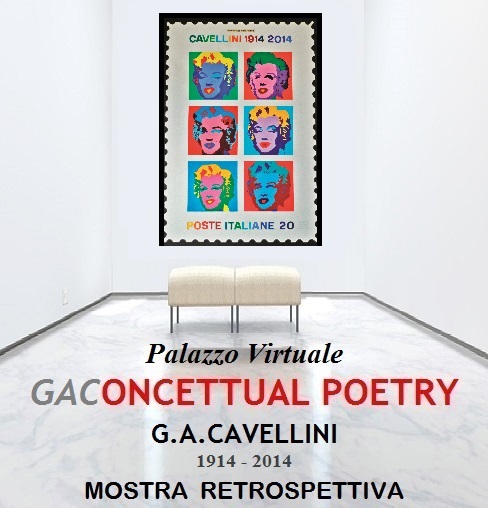 on the occasion of the centenary of his birth with a presentation of  Piero Cavellini, a visual poem and a critical essay by  Giovanni  Bonanno. Inaugurated Saturday, September 7, 2014, at 18.00, the retrospective exhibition curated by Giovanni Bonanno in collaboration with the Archives Cavellini of Brescia entitled "GACONCETTUAL POETRY" that Space Ophen Virtual Art Gallery of Salerno dedicated to the anniversary of the centenary of Guglielmo Achille Cavellini. 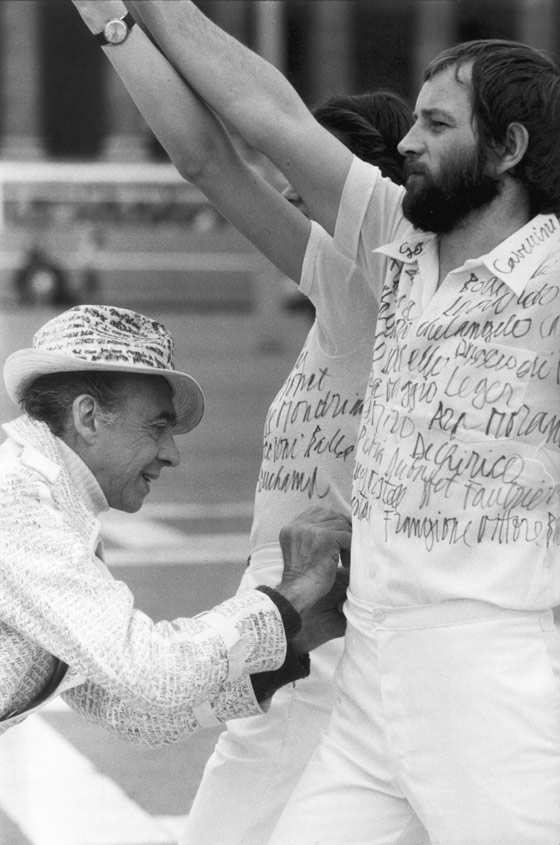 For several decades GAC in Italy was opposed as a "rich eccentric streak of exhibitionism," including not only because it was considered a major collector of contemporary art and accordingly placed by the official critics in complete isolation. Since 1970, he had first tried to "undermine" the official art system and to make their voices heard by implementing appropriate "noise" in the system suggesting its presence as an authentic creative moment. Art, after being relegated for a long time indoors ideas, with the “Autostoricizzazione” "1971 GAC became liberation, opening of borders, cultural, art that was integrated in life. In addition, sharing and embracing multiple search fields transverse and alternative proposals of official culture; painting, visual poetry, the art of behavior to Body Art stood independently on the edge of a system, in a free zone, in a suburb of border practicable, Artist somewhat difficult to classify the different practices used for, but definitely the protagonist overcoming cross of a traditional logic. Today, after a few decades of reflection, Guglielmo Achille Cavellini is a brilliant and multi-faceted character. He lived contemporary art after World War II until 1990, the year of his death, as maverick, he said: "I prefer to live my adventure into the future, rather than having to get bogged down in the tangled jungle of art" by artist not conditioned by schemes and taxation. Has not been a matter of simple elegance or style but a glossy illuminated operation that highlighted and brought to light the problems and contradictions of a cultural system that leaves nothing to chance and that is almost always the work and the artist as a mere commodity. GAC (Guglielmo Achille Cavellini) was an important scholar and collector of abstract art in Europe. Since the mid-40s begins with drawings and portraits. In '60, he devoted himself instead to experimentation: some examples of his work are often related to quotes, real elaboration of famous works that make it a genuine actor in the staging of art. GAC puts into practice his theory of self-historicisation: the do it yourself build around in the hall of success, putting aside the canonical process that the system uses for this purpose. It is not an act of self-representation megalomaniac, but the triggering of an alternative procedure: a revolution in the communication arts. Andy Warhol begins to retract Cavellini, and the wizards GAC pays tribute to Andy with the stamp "The Marilyn Warhol" (1984). The use of recycled materials (the objects assembled in the wood inlays in carbon), is the instrument of his work. Born Teatrini and stamps artist through which it is paid tribute to the geniuses of painting: Picasso, Léger, Matisse, Braque was born and, even, the love of Mail Art, free and democratic movement that allows GAC to have contact and comparisons with many important artists scattered all over the planet.