May 13, 2012 - I am a huge fan of contemporary Fluxus. Many of the artists participate in the mail-art network, so there are numerous chances to exchange work. The title for this post is borrowed from Tom Clark's The Poetry Beat - sort of a hard-boiled reporter's memoirs of covering the city's toughest precincts. For all its postive traits, I do not think Fluxus is a particularly good choice for dance music.

Some of the entries on this post are going to have to be considered "Lost Classics" because they were not sent recently. Yet I think they are outstanding work. I want to share them as well as enter them in my own documentation.

First is Litsa Spathi's chapter for the Project 26 collaborative book. This is one of those gems that fell through the cracks when it came to documenting the project. Since Litsa Spathi (and David-Baptiste Chirot) are among my personal favorite visual poets working today, I am thrilled to have this original piece from a project I also worked on.

Current IUOMA friends might be familiar with the collaborative visual poetry editions and the five books in Asemics 16. Fewer remember that the first mail-art book Cheryl Penn (South Africa) and I co-coordinated at the IUOMA was a book where 26 artists devoted a chapter each to represent the alphabet (A-Z). Records of the project can be found in the collaborative books group. Here is one thread:

We made the call for contributors to Project 26 in late 2010 and everything was wrapped circa May, 2011. If you think current efforts are disorganized, all I can say is: You must not have participated in Project 26. Documentation was definitely sketchy. Litsa Spathi was a trooper to offer her support to a huge undertaking using an untested approach. Her chapter is "O." She has used that letter with great success in her other vispo. As with many other visual poets from Fluxus, I see an unbroken line back to Emmett Williams' concrete poetry in Litsa Spathi's work - maybe that's subjective. I discussed this at some length in a previous post about vispo by Reed Altemus (Maine, USA). But the often geometric forms of that earlier black and white "typewriter art" have evolved into much more organic forms. Minimalism and simplicity are common characteristics across generations of Fluxus (although all Fluxus work is certainly not minimal). "O" - the focus on a single letter - was an ideal opportunity to focus on the minimal. For me, Spathi offers a meditation on the significance of the circle, especially ideas of unity, cohesion, earth, and nature in beautiful work above. 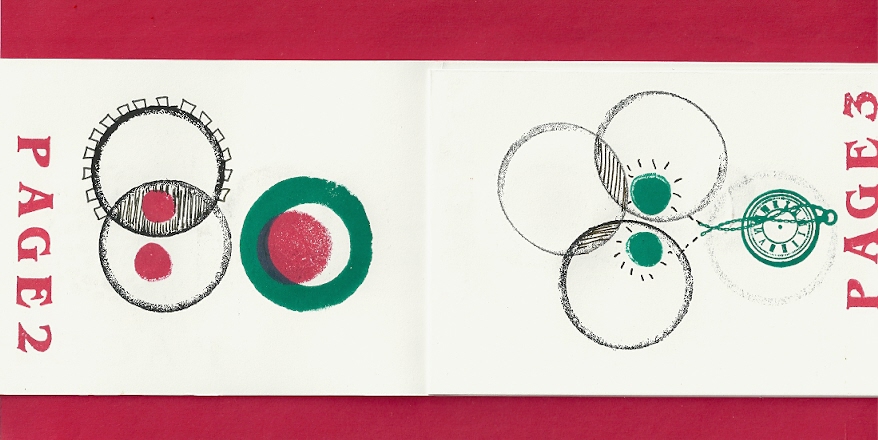 Spathi departs from concrete poetry and makes visual poetry with the addition of images (some great drawings in places I think) that emerge associatively and integrate perfectly with the letter. 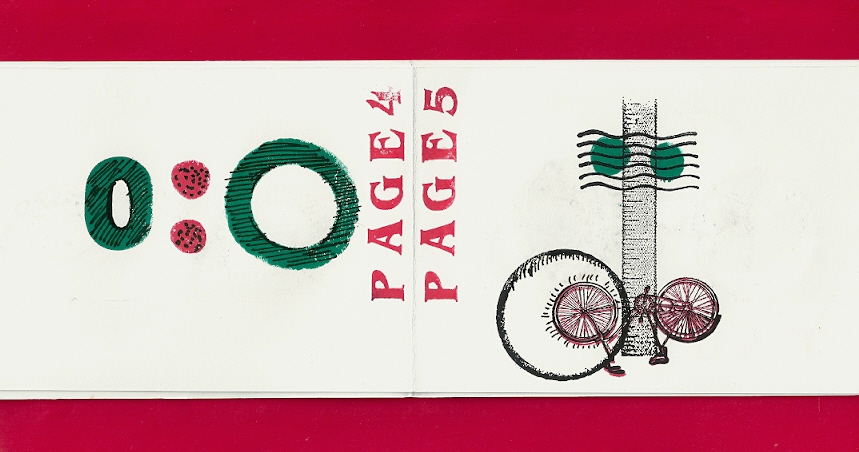 In places throughout the chapter are suggestions of asemic writing and the combination of elements to create glyphs as well as repititions that create a unifying visual syntax.

Many think of Fluxus as a movement in the visual arts. Fluxus is ultimately a worldview that encompasses numerous aspects of the relation between life and art. Fluxus has had historically and still has a strong literary component. For example, there are in reality several strains of Fluxus poetry, including Fluxus iterations of (1) visual and concrete poetry (2) chance operations poetry as seen in John Cage and Jackson MacLow (3) object and haptic poetry (4) performance and or spoken word poetry and (5) a lesser-known strain of spontaneous composition poetry that was issued by Dick Higgins' Something Else Press. Litsa Spathi has formulated and articulated a Fluxus Poetics that I think offers new ways of thinking about poetry and composition. I have written previously that Spathi's "Nobody sells her DNA" is an essential classic in contemporary vispo. So I am thrilled to have the Nobody stamp included in my "O" chapter. You can visit the Fluxus Poetry blog to learn more and find other related links:

Litsa, a belated thanks for the chapter and for your participation in Project 26. It gave us courage to move ahead in the darkness and fog! I have no pride. When friends were receiving this Duchamp homage from JF, and it did not turn up in my mailbox, I posted a comment begging him to send me one. I am not sure if that is or is not mail-art kosher. He is a sweet guy and sent one without grumbling. In addition to the content, I like the zine-collage look. You do not see that in JF's current work, which is very polished. The stamps are also fabulous: JF is on hiatus from IUOMA, but friends will keep in touch and he will not be forgotten! Here is a link to what appears to be a relatively new blog he has started: Cernjul Viviana Maria is an active correspondent to many in the mail-art network. Much of her work is in the spirit of Fluxus. I also know her as a supportive presence on the Open Fluxus site.  I received this beautiful work from Cernjul recently and am glad we have connected. (I sent her an envelope last week.) The color, texture, and simplicity of this mail-art make it very striking. Also included was card that reveals more about Viviana's collage style: And the usual suspect: 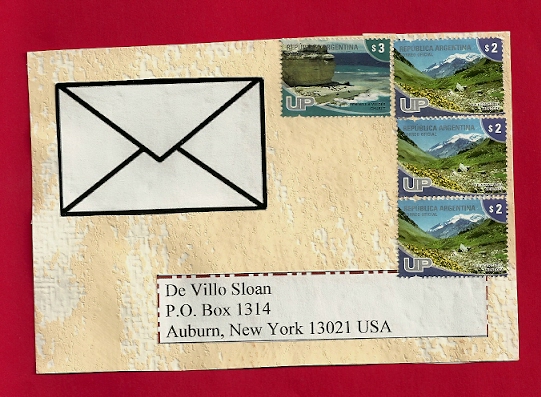 I hope this is the first of many exchanges with Cernjul. She has a great blog that connects to vispo, Fluxus, and mail-art in South America: 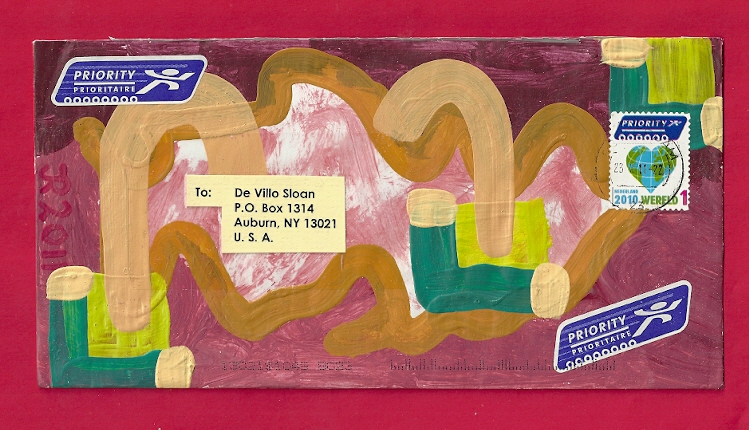 Ruud Janssen, of course, makes it possible for us each day to post blogs, share mail-art with friends, have discussions, and coordinate international projects at the IUOMA, which was his concept brought to realization. He has successfully merged mail-art with the Digital Age. But here in this "Fluxus Beat" blog, it is far more important to note that I think Ruud is one of the central figures working in Fluxus today. (Some prefer new names such as Luxus, Post-Fluxus, and Neo-Fluxus, but for me, Fluxus is Fluxus.)

I like the work of the Fluxus artists very much, and have been focusing on collecting as many of Ruud's legendary hand-painted envelopes as I can. Well, over many months, I have four additions to the archives that have not been blogged - until now. Here is the second: 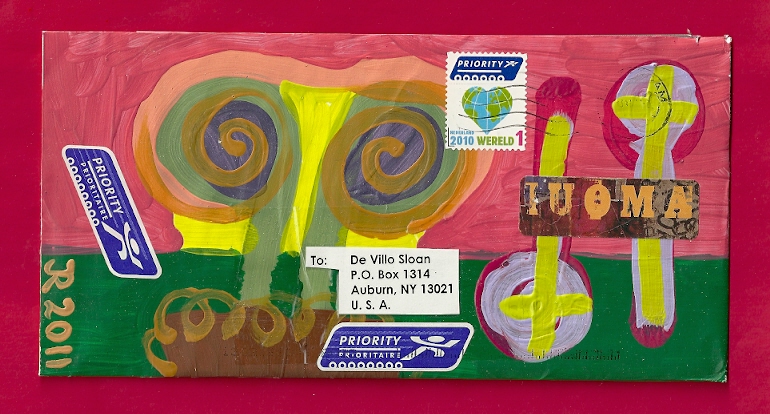 This envelope contained some great material. First, a scanner-bed collage: "Zalop" is probably the second most widely used construct ("IUOMA" being the first) from Ruud's ongoing Fluxus Words project. Thanks to the enthusiasm of artists including Cheryl Penn, Eduardo Cardoso (Portugal), and Katerina Nikoltsou (Greece), "Zalop" is circulating through the eternal network and into the world. Here is a link to the Fluxus Words blog where you can learn more and see some great work:

"Zalop" appears constantly in mail-art I receive now. Another word, "Gotij," is also becoming a part of our shared vocablulary. This piece Ruud sent me - definitely a Fluxus composition - speaks of the materiality of language and the joy of play, combining and recombining to make new things.

Here is a great letter from Ruud, answering questions I have had concerning the background of the hand-painted envelopes: 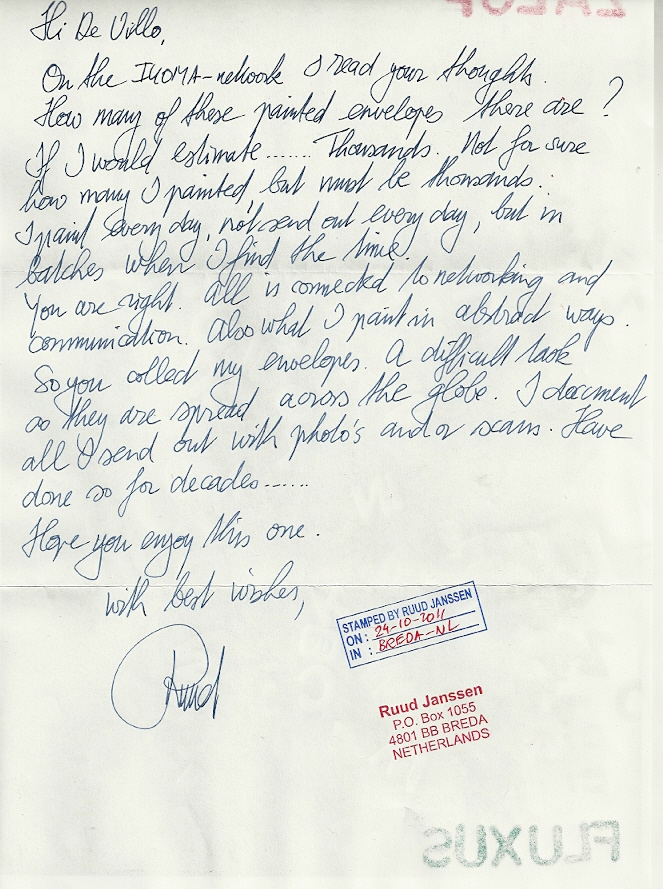 The bottom photo (sent by Ruud) is a great piece of Fluxus memorabilia. In April 2010, the Stendahl Gallery in New York City hosted Fluxus events and exhibits. I think there were other activities in the city that coincided; seems to me I saw a New York Times article about outdoor performances too.

Ruud attended the event, and this is a shot of a performance. Ruud Janssen is wearing the red tie. The woman to his left is Alison Knowles (white sweater & blue scarf - legendary Fluxus figure and widow of Dick Higgins), and next to Alison,(I believe) is Reed Altemus. Just, wow, a tremendous mix of old and new.

Here is another hand-painted envelope. I thought this had been blogged but cannot find any evidence it was, regardless another beauty: And to wrap this particular "Fluxus Beat" (blog) because there is still more great material that will have to await another opportunity, here is a stunner envelope from Ruud Janssen: 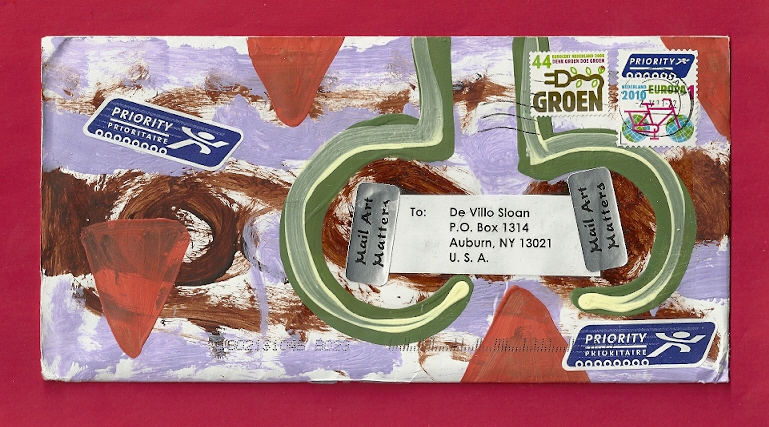 This envelope is notable for what I have called "hooks" or question mark structures found also in Ruud Janssen's larger paintings.

My deepest thanks to Litsa Spathi, JF Chapelle, Cernjul Viviana Maria, and Ruud Janssen for so warmly sharing this fantastic work!

Thanks Ruud, by "chance operations" I have just managed to get things organized enough to do another "Fluxus Beat" installment. Great to have the Nobody Press mail-art too! Thanks again.

Love the article De Villo SLoan. As thanks another painted envelope will be on its way....... (to let your collection grow). Ruud

Well Carina, clearly at least a part of your work does have the Fluxus spirit, and that has roots in DaDa. So I hope you continue to experiment.

Yes I know, but I do not know, I've been on the Dark Side of the Moon, the school ran quickly past Fluxus and mail art - I did not realize this was something that I already was doing then - it did not fit in time and with other fellow students.

Hi Carina, you must know from your art studies Fluxus is "real" in the artworld, compared to MinXus, for instance, that is an invention of mail-art created by us to have fun and a concept for exchanges.

Fluxus people became interested and began participating in mail-art many years ago. Yoko Ono was once very active in mail-art. The Fluxus presence, I think, adds to mail-art being experiemental and sometimes based on concept art (conceptual art). It's one of those little perks in ma having the connection to Fluxus, I think. Much of Ray Johnson's art has the Fluxus spirit.

Thanks DVS!  I think I again became a bit wiser...

Litsa's post. Not Lisa. Things have been tough without the Spell Chick.

Glad you slinxed by Cheryl. Yip, a chestnut from Project 26 when the vispoets disassembled the alphabet. We really didn't have the documentation worked out at that point, and how many people saw Litsa Spathi's chapter?

You've certainly had a role in Fluxus Words. Gold stars for all the Zalops. I like Ruud's scannerpo in particular. Even though this blog could have been twice as long, I hope there's a snapshot of Fluxus now.

I always read Lisa Spathi's directives on Fluxlist Europe and elsewhere for guidance. I think we're supposed to call it Luxus now. Not exactly sure. But I don't want to muddy the waters so I'll stick with Fluxus - the brand we grew up with & can depend on in an uncertain world.

Great way to showcase Fluxus De Villo. Somehow seeing the differences - and yet the similarities between each of the works you posted brings the visual influence and impact of Fluxus to the mediums of poetry, art and language in an easily readable and accessible manner :-) X