Sometimes we get something in the mail that exceeds expectations and excels beyond requirements of the medium of mail art. So this is a new "category" or "genus" or "subspecies" of blog post that I am creating for my documenting reviews: "Something More Than Mail Art." (SMTMA for short...though I'm not sure how one would pronounce that: [smuht-mah]? [smaht-mah]? [smohwt-mah]? ...I dunno... Talk amongst yourselves and someone will figure it out.)

Generally, SMTMA is so outrageously over-the-top and so flabbergasting for the recipient (that would be me) that the effect is like a late-night party that got out of hand and at which one has unintentionally imbibed too much of the spirit-waters...resulting in a hazy, "pull-down-the-shades-it's-too-bright-in-here" kind of morning, where one wonders "How did this happen?" and you're mysteriously grateful that you're still able to have such a good time, even though you've been bowled-over and flattened by the experience...

It's also so astounding that you're not quite sure how to describe and acknowledge it because—GAH!—it's virtually indescribable in its magnificence-cum-astoundingness-cum-creativity-cum-you get the point. You wonder "How long and how much time did this magnus opus take to create?" And then you feel guilty for being the recipient of someone's masterpiece, and "What in the wolrd might have you done to deserve such treasures?" ...So you SIT ON IT and let it shine on your desktop until the time laspse becomes so embarrassing that you have to do SOMETHING... So you post your meager photos that certainly can't do justice to the REAL LIVE THING...and you ply unconvincing apologies for your tardiness...but —GAH-to-the-second-power!!!— because LOOK AT IT!!! WHO CAN BE BLAMED FOR BEING TONGUE-TIED??!?! 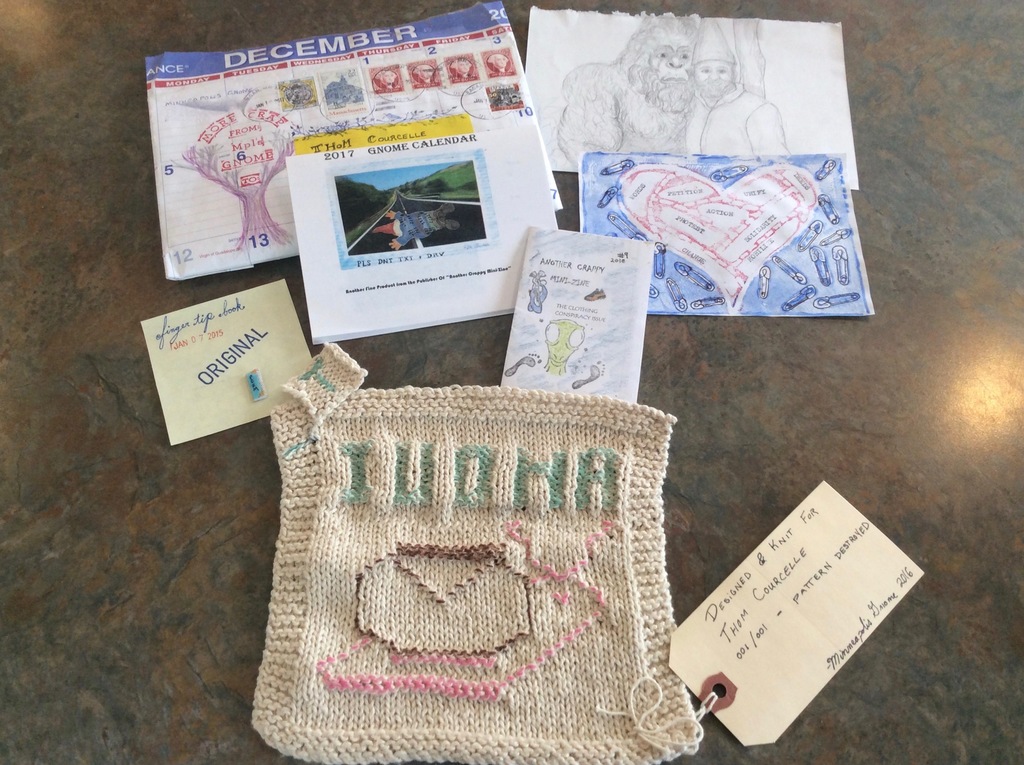 So this premier SMTMA arrived from Minneapolis Gnome in a THIICK ENVELOPE (...STOP trying to turn me on, baby!!) made out of a desktop calendar sheet, and it had vintage stamps and ARTISTAMPS on it and was decorated with stamp art and hand drawings. And inside, as you can see, was a boat-load of hand-crafted items... As if being able to enjoy Minnie's artwork ALL YEAR LONG wasn't enough, these additional items were also enclosed: And below that, is Minnie's *first* attempt at making a styrofoam print, except that it also includes tempura paint, ink pad print, ink pen, and typewritten medium.They're SAFETYPINS!!! One of my favorite symbols of rebellion and solidarity for the underrepresented. Also included—two zines, both independently unique. The one on the left might be described as a Trash boekie (or TRASHPO). Although the miniature zine (about the size of an ATC) doesn't use the term TrashPo, the description in the front sounds mightily similar: "This mini-zine is printed on 100% salvaged paper from a recycling bin. The ink came with a 2nd or 3rd hand printer from Craigslist. Is that Salvaged?" Ummm... DERP!! You better believe it! I haven't heard of anyboy that thrifty since...nope that takes the cake. Diane Keys better watch out. She's got competition. I'd show you more of this zine but it's sort of really NSFW. (!)

The zine on the left claims to be the smallest book of poetry ever published. It obviously is already in its second printing because there were several critical reviews that came atached to it:

"Only an ocular sadist would make a book this small!"   —NPR

"He could at least have used a more legible font."   —Publishers' Weekly

"Brevity is a virtue, but small size must have a limit."   —Boston Globe

As a lover of poetry, I'd write my own critique, but I have trouble holding the pages open long enough to quote from it... Be assured, however, that the theme is MAIL ART -related. 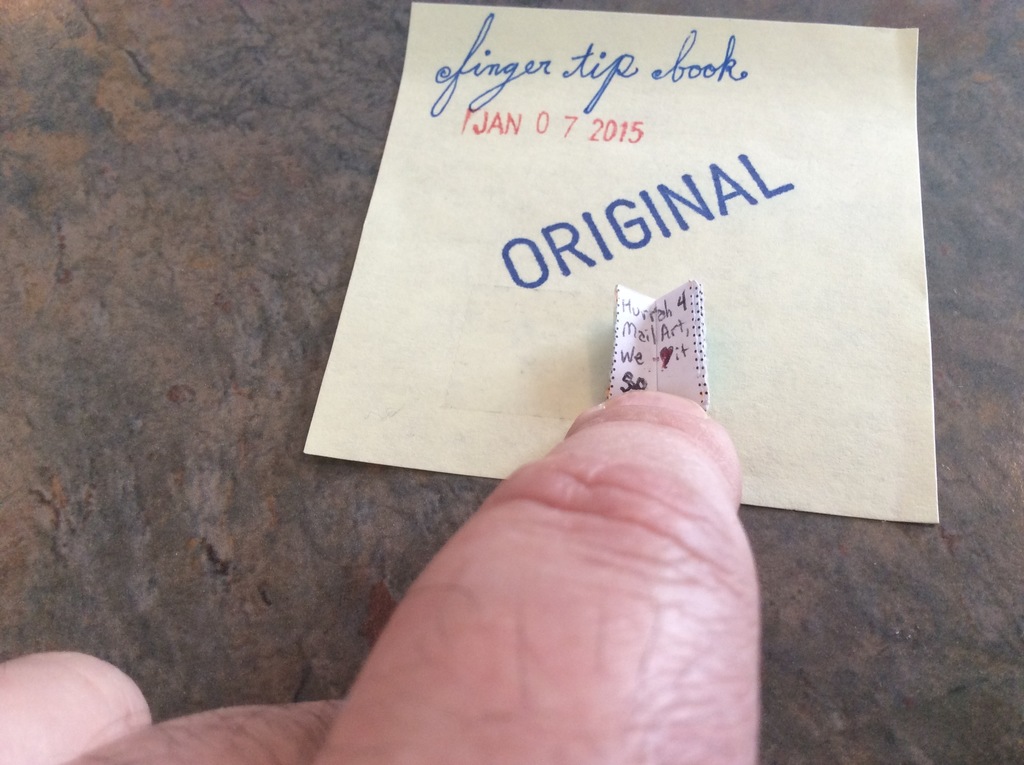 And last but not least in bulking up that envelope...was this hand knit and colored item: 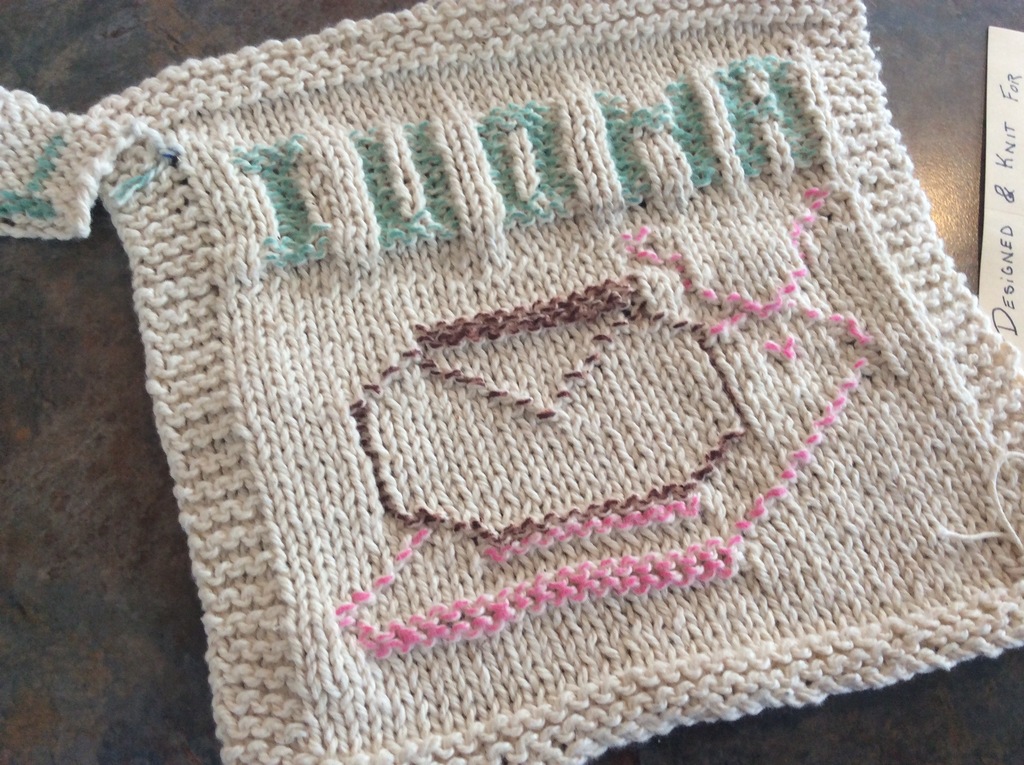 You can also see a picture at the very top of this post. Attached to the article is a tag that notes the artifact is a limited edition of 001/001 and the original pattern has been destroyed. A ONE OF A KIND...and someday will be worth millions on the Sotheby's auction block... but not until I'm GOOD AND DEAD, D'YA HEAR ME???!!! As a professional knitter I can attest to the craftsmanship of this preciously-designed item incorporating texture lettering and a MAIL SNAIL.

Thanks to Minneapolis Gnome for this time intensive and super [duper] creative postal surprise. If correspondence pieces continue to be of this caliber, it's possible that we may have to re-name this Eternal Network as: The International Union of Something More Than Mail Art (IUOSMTMA)!!

Stay tuned... there are several more recently received SMTMAs waiting to be revealed...

Comment by Minneapolis Gnome on March 27, 2017 at 2:11pm
OMG - your praise is overwhelming, Dear Sir! I'm glad you liked it, I have been a fan of your mail art and knitting for quite some time and wanted to make something properly expressive of my appreciation. I'm grateful it seems to have done the trick! Thank you!

Comment by stripygoose on March 26, 2017 at 11:10pm
MG has totally nailed it - the knitted piece in particular is
wonderful :>)