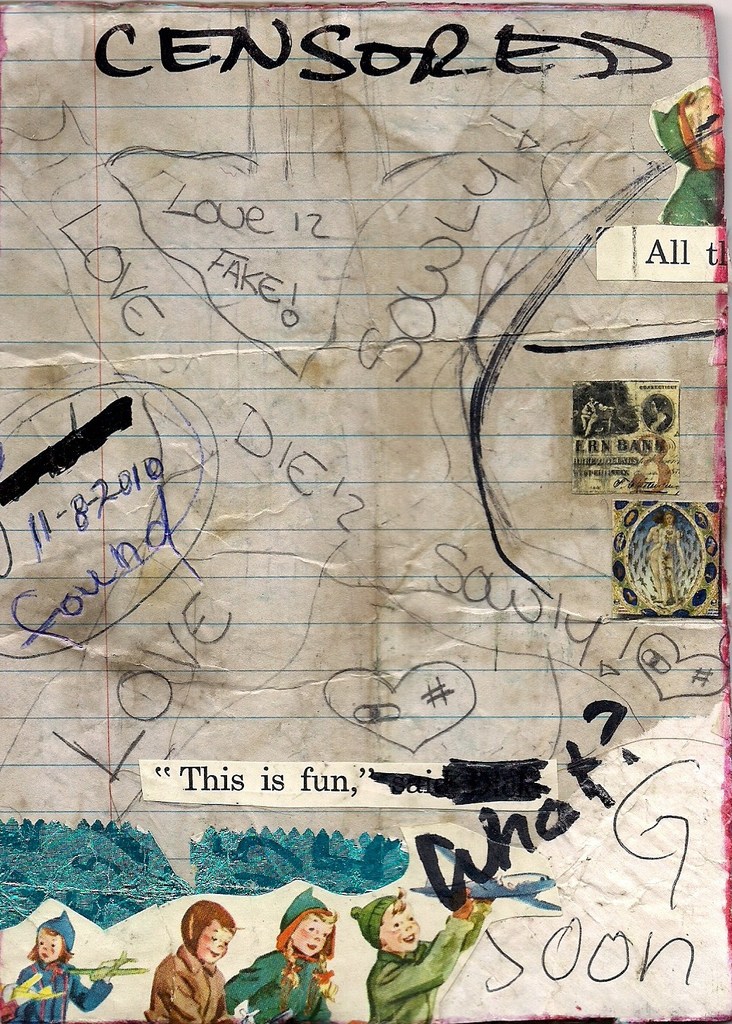 Mail-art by IUOMA member Diane Keys (Elgin, Illinois, USA)
November 22, 2010 - How I met Diane Keys (virtually) at the IUOMA helps explain this first installment of mail-art I received from her. On a quiet Sunday afternoon not long ago, I was preparing a blog. Rain Rien Nevermind came online and made a pronouncement concerning his Recycling Mail-Art Group: Roadkill was not viable mail-art, recycled or otherwise. "Strange," I thought. "People use roadkill for mail-art? I hadn't considered that." Next, Diane Keys, who was part of the recycling group started a spin-off road-kill discussion group. Then I was inviting her to be my friend. I looked in her portfolio and discovered some work I really liked. This is meant in a positive way: Some of it looks like garbage. Diane's work is very diverse; and this is clearly just one side of what she does. One area she explores is collage-assemblages of found material on the trashy side. I will again invoke the Jim Leftwich creation: Trashpo. The work she sent me (I'll talk about the postage due I was stuck with later) is a really fine example of Diane Keys Trashpo: Make no mistake, I adore this piece. Fantastic found poetry of the vernacular here:
CENSORED
Love iz fake!
Sowly! All
Love Die'z sowly
"This is fun," What?
G SOON
That really,.. that expresses something I think I can possibly relate to, maybe. And the grittiness and sodden quality, as if it were found at random on an Illinois street during a dreary day in autumn dreamed by E.A. Poe, only intensifies the sentiments of the words like good vispo - fantastic, Diane! This might not be technically roadkill, but I would put it in the category of "Roadkill of the Heart." In fact, Diane, if you ever were able to gather together a series of these lyrics and would be willing to title it "Roadkill of the Heart," I would be pleased to publish it and seek to add to it "With a Critical Introduction by Rain Rien Nevermind" - so moved am I by these expressions and sentiments. John Bennett recently sent Karen Champlin his shredded shopping list. For the first time, I am a bit jealous. Why does Karen get to have John's shredded shopping list and not me? Diane Keys has helped me regain my self-confidence. To add to the whole experience, Diane left me with postage due to pay. A really interesting way to start a friendship, but well-worth the 17 cents: We also have a reference to Delete-ism too; that's another story. Being an avid supporter of the New York State Thruway, where I spend a great deal of time seeing my contributions at work, I am no stranger to roadkill action art. The best results using this method of composition involve Wal-Mart tractor trailers moving at tremendous velocity encountering deer. This produces fantastic haptic assemblages and abstract pavement paintings. On the other hand, it has been noted by myself and others that this form of art might indeed be inhumane and exploitive - it might be best if we could find a way to eliminate it altogether. Roadside installations of this sort can distract the more refined class of drivers. There are two sides to the mail-art roadkill controversy. And being torn, I demure from further comment. But it has brought me to discover Diane Keys and her mail-art. So what's next, Diane? And how much will it cost me?
Some grabs from Diane Keys' IUOMA portfolio. Seriously good stuff, IMHO: I noticed you asked about Fluxus boxes. You could probably do some nice ones, either found objects or kits that have a purpose. Thanks so much, Diane. I gathered from the Delete-ists and the Nevermind you have a great sense of humor. Guess I'm banking on that.
Word for the day: Eviscerate (TY Batgirl)
Mail-Art Astrology: Scorpio Rising