September 26, 2014 - I received mail-art from Monty Cantsin and I am curious to know who adopted the famous moniker. Monty Cantsin is a multiple user identity anyone can adopt for artistic purposes, and the name has been used in the mail-art network since it was invented by David Zack in the 1970s. Monty Cantsin is associated with Neoism; the only artist with Neoist leanings I know in Virginia is Jim Leftwich (in Roanoke). As shown above, Monty revealed himself on a gambling card. Here is the other side of the card:

Without the Monty Cantsin twist, I would consider this a routine Trashpo mailing; discarded lottery cards are a Trashpo staple. The card was enclosed in half of a brown paper bag that has been decorated. 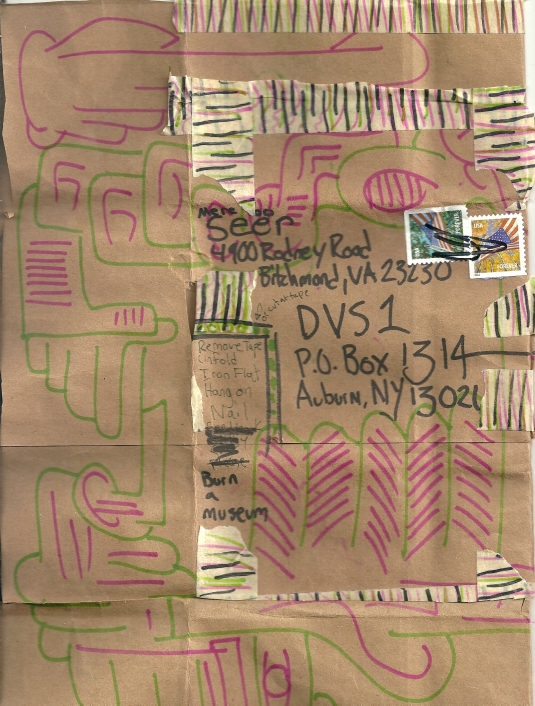 Initially, when I saw “Seer” on the return address, I thought it was mail-art from Chris “Mudhead” Reynolds, who edits a zine called Seers. Chris often makes designs similar to those on the bag. Upon closer inspection, I grew less certain about Chris Reynolds. He lives in Arizona and has never made a reference to Neoism (as far as I know). The bag also refers to an enclosed nail, which I could not find.

This is not the first time I have been drawn into Neoist mysteries, although it is the first time I have heard from Monty Cantsin. In typical Neoist fashion, there likely will be no explanation or closure. I could try mailing to the address on the envelope, although I suspect it is fake. If anyone could help, the information would be appreciated - just as a matter of curiosity.