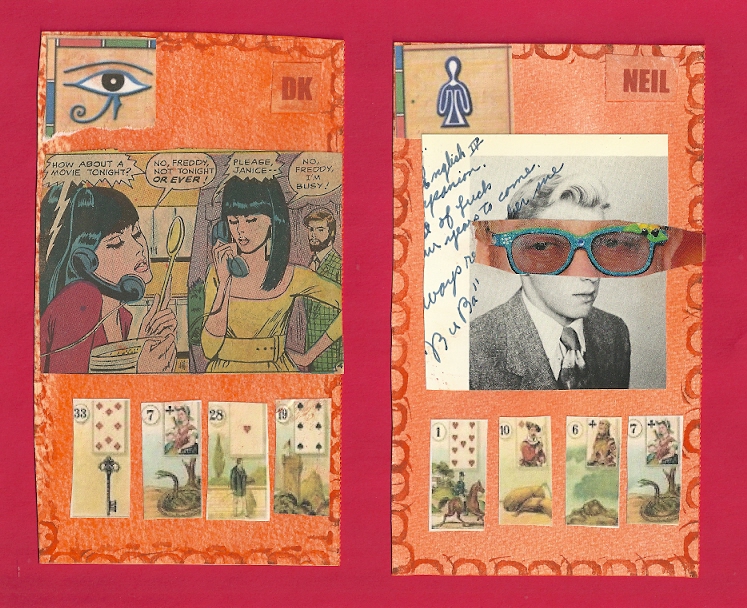 April 29, 2012 - Amid purges, challenges to its authenticity, scandals, bickering, and organizational issues that rival the sinking Titanic, Trashpo and the DKult are a a genuine phenom. Artists across the globe are looking into their dumpsters and bins with hungry eyes seeking inspiration. Truly exciting work is being created.

Unfortunately, the phenom has given rise to a vast industry of fakes and duplicity. Dark wall, who has established D-Kollectibles as a subsidiary of DKULTNY, claims to have identified no less than 17 artists in the Eternal Network posing as Diane Keys and circulating fradulent artwork.  Beware.

While most of the fakes are crude and easy to spot, I think the most alarming development has been the crass merchandising of Trashpo within Dkult ranks. Some die-hard D-Kulters are sad victims of this stampede while others have shown themselves to be calculating exploiters seeking to cash in while it lasts and to cash out and be on the last train before THE NEXT WAVE comes along.

Dean marKs or Marx - visonary of the D-Konomy - short selling the Elgin Shroud or in other words: DKult chewed up and spit out a decent & well-meaning person

The saddest casualty of DKult mania so far is probably Dean Marks (Paris, France). Now the sad story of how DKult destroyed his life and career can be told as a cautionary tale of the torture within an artist's soul, starry-eyed idealsim, and the brutality of the corporate board room that crushes the human spirit like a cigarette butt beneath an iron heel: 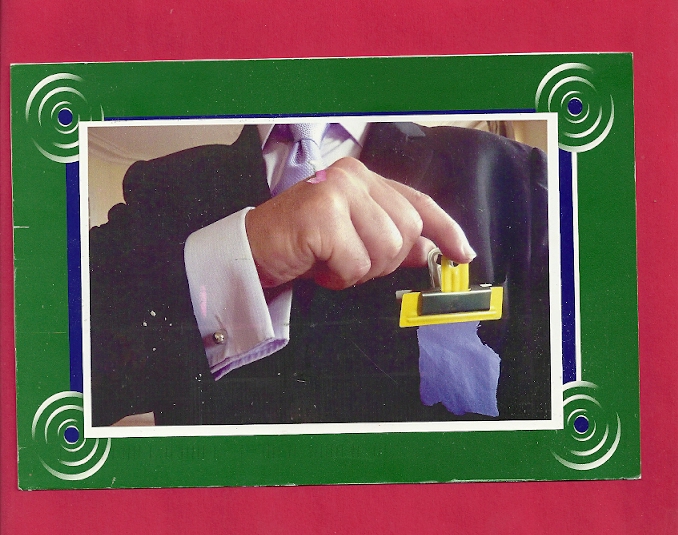 When I first took this piece out of my mailbox, I seriously thought it was junk mail from a mutual fund or credit card company. Then I saw the "suit" was holding an Elgin Shroud Shred. Double take. In the stark, Soviet-style Post Office in the shadow of the Auburn Correctional Facility where you might observe Franz Kafka awaiting trial, I looked at the other side of the mail-art and became immersed in the riveting and tragic story below. I hope you can read the scan because I want you to know it in Dean's words: 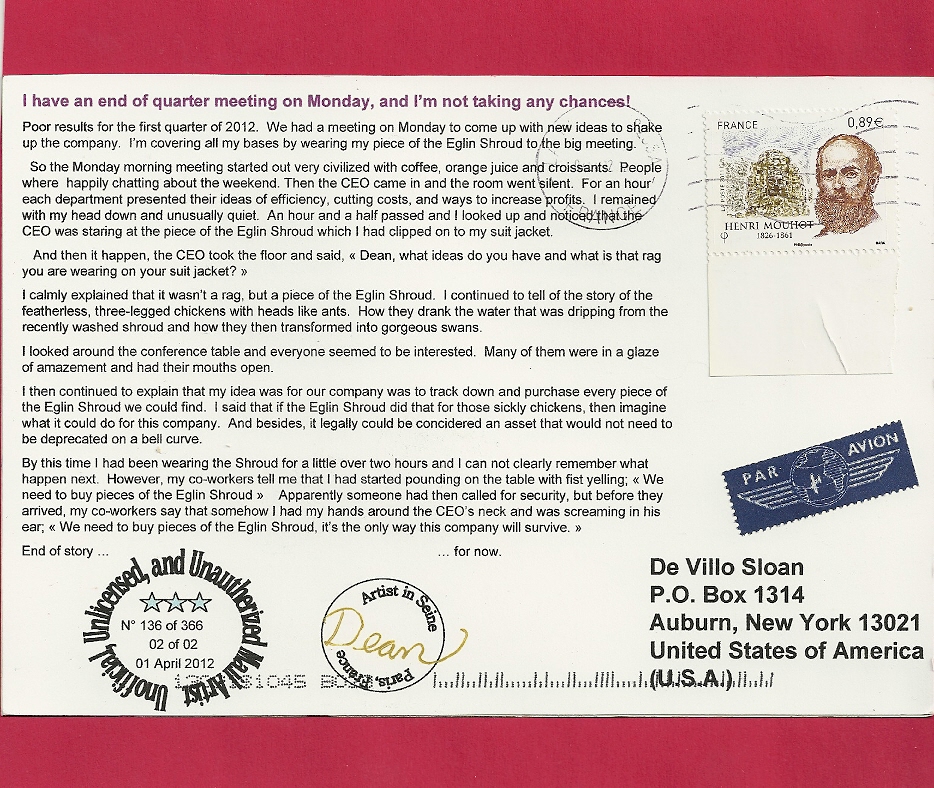 Dkulters were no doubt puzzled and concerned when Dean began posting Anti-Trashpo comments on the IUOMA board a few days back, especially questioning the powers of the Elgin Shroud. His tirade came on the wake of what is now known as the Schwitterpo Uprising.

No - Dean is not an agent of TOXIS. No - Dean is not a cyborg sent from the future by Kurt Schwitters to destory Trashpo. Dean genuinely wanted to help Trashpo. He succumbed to DK's siren spell, her Svengali Ron Hubbard doublespeak like so many others.  Ask Mick Ronson: No one can find him. Ask Mr. Stubbs: He stopped talking. Dean chewed off more than he could bite.

Dean was a visionary, taking the D-Konomy straight to the CEO. Dean was a visionary, seeking to be an agent of cultural change through his own ineffective actions and pathetic strategies. It was a futile gesture. Dean had to experience his D-Konversion alone and without guidance, suffering the ill-effects of whatever ramped up orgone energy hyperdrive concoction is woven into the shroud shred.

Where was the spiritutal guidance of DharmaDaDa Neil Gordon? Where was the tranquility of the meditation rooms and the posh Elgin mansion? Where are KDJ's golden offshore accounts when Dean needs assistance and rehabilitation? A chimera. Dean was the lone gunman, babbling incoherent conspiracy theories as they took away his key to the executive washroom. Who would believe any of it? DK counts on that to cover her tracks when best-laid plans fail. We all must assume responsibility, of course.

But where will they be when you drink the Kool Aid? 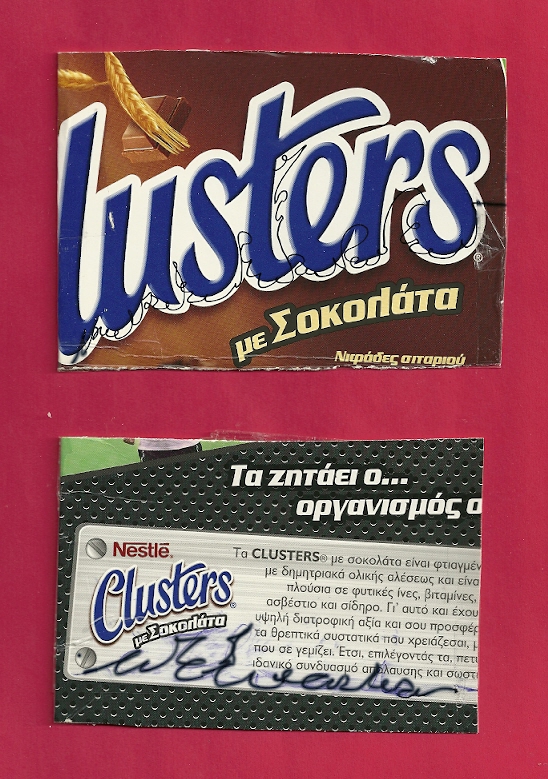 As the sad antics inside the DKult continue, trashpoets are making great strides. Here are two pieces of Trashpo Cerealism (with a dash of asemics) that Katerina sent me some time back but have never before been posted. Kat has been doing great work with trash since the movement started. Her trashbooks are amazing. Here are the reverse sides: Kat has taken leadership of DKult Greece = DKULTGRR. Doubtless she will run a tight ship and avoid the scandals and corruption that seem to follow the Dkult everywhere. The German branch of DKult - D-KUNST - is a model of efficiency, organization, and craftmanship. Bravo to Svenja Wahl. Katerina also helps spread the Trashpo message with her great stamps: 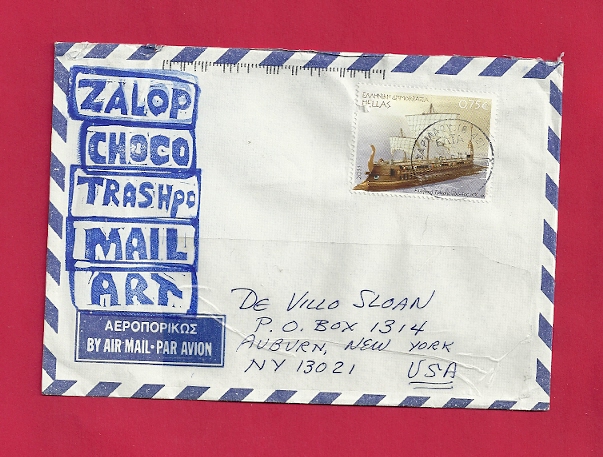 As ever, thanks Katerina. No discussion of Trashpo and Cerealism seems complete to me without some sort of nod to Richard Canard. I've had this piece out forever and am moving it into the archive. Given the date, I cannot believe I haven't blogged it before; but it doesn't appear that I have. If I have, then consider it a Lost Classics installment.

I especially like: "I make postcards in order to find out what kind of mail-art I'm going to make." I also like the famous Andy Warhol 15 minutes quote followed by Richard's observation: "But nostalgia is inclined to last so much more longer." That rings true to me, at least at the moment. 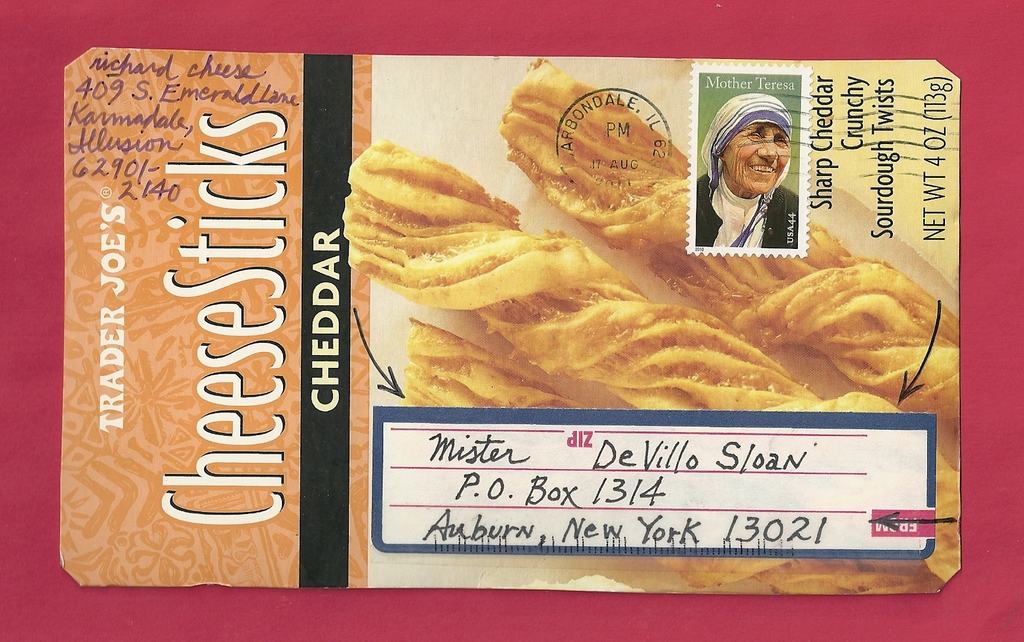 Earn Your Certification in Trashpo from the Famous Martha Stuart School of Asemic Wallpaper!!!

Create a Thesis about this Trashpo classic:

Post your thesis at the Asemic Wallpaper School online campus:

You're done. Your Trashpo certificate will be mailed to you! Kneel before DK & not the Porcelain God Idol!!!

Hey DW? Are you a member of the Velvet UndergroundPo?

Let me finish this banana. Then peels of laughter.

Andy wants a new phone. He says it's time for Helter-Cell-ter.

Neil things it's a flying sauceer. I think it's tomato soup.