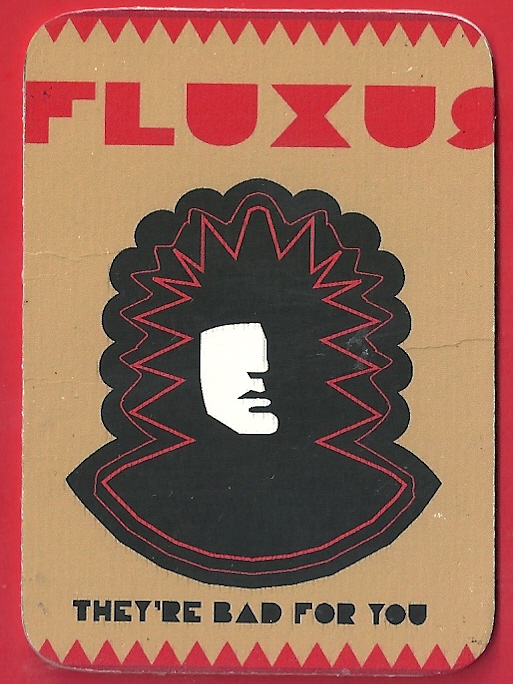 March 18, 2016 - A current micro-trend in mail art seems to be sending work unsigned, which produces varying degrees of havoc on the blogs and at other digital venues that aim to document. The creator of this wonderful piece, however, is no mystery. David Stafford obviously took time from his current USA presidential election commentary to return to a favorite object of his brilliant satire and parody: the avant garde aka the postavant. Specifically, this work references Fluxus, which is a proverbial “glass house” or “a house built upon sand” when examined closely. This beautiful yet diminutive ATC (Artist Trading Card) is approximately 2 X 3 inches. The front is outstanding, but there is a punch line of sorts:

Ironically, David Stafford probably captures the spirit of Fluxus better than many of the current practitioners and fans. At least some of the members of the “Old Fluxus” are on record stating that their efforts were meant to be funny. The somber, quasi-religious, terminally serious yet passive deference of the majority of current Fluxus fans especially might be grounded in a grotesque and absurd misreading of Fluxus that subverts the movement’s original intentions. But then again, we know that more often than not: “The history of reading is misreading.”

David Stafford also included another item that, for me, makes a commentary on the leftist ideology of Fluxus. I have been assured that Fluxus is non-ideological, but I contend a close look at the writing of George Maciunas reveals a deeply political agenda. Indeed, placing Fluxus in the context of the Cold War is illuminating. A European (toward the eastern part) once commented on something I had written involving affinities between Fluxus and the Chinese Cultural Revolution: “An American cannot understand what George Maciunas was trying to do.” I disagree.

Many thanks to David Stafford!

Thanks Ruud. David's Fluxus Wallet is another one of his great takes on Fluxus, IMHO. Classic video.