October 10, 2011 - The envelope containing Cheryl Penn's contribution to the fifth edition of the Asemics 16 collaborative mail-art book project presents a key to understanding the chapter: "The seeping fade to Post Literacy." Indeed, this chapter is far more subdued than its predecessors. Here is the opening page:

This is a case where scans cannot adequately capture the subtle tones and textures of language floating like apparitions over whiteness. Penn is experimenting with partially obscured or fragmented backwards letters, an interesting idea for sure.

This fifth edition has the theme of "Asemic Syntax." I believe Penn is offering the fairly ingenious suggestion that we should look to the blankness of the page and its interaction with written or printed symbols (like the spoken word's relationship to silence) as a fundamental root of syntax. And - following her stated concept on the envelope - words fading back into silence - represent the oft-lamented loss of literacy that so many believe we are witnessing. Here are pages two and three: Most of the chapter focuses on partial words and phrases. While her concept is built on minimalism, Penn has added considerable depth to the piece with what appear to be small, bits and shred of symbols so subtle or faded they can barely be perceived by the eye. The paradox - the reversal of expectations - comes when one looks for a time at the whiteness of the pages and begins to find more and more symbols that can be barely seen let alone read or understood. This seems to be yet another novel approach to asemic writing: reverse disappearing ink? Here is the center section, pages four and five: 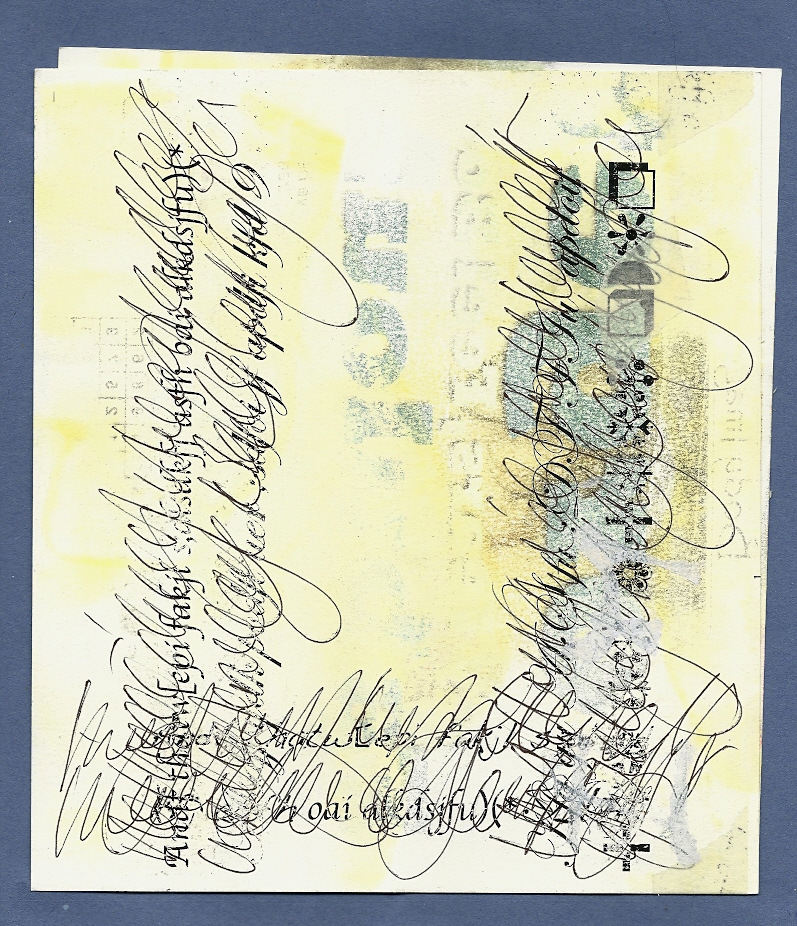 The colored layering on these pages is more pronounced, and it's not unlike the effects achieved by David Baptiste-Chirot (Cheryl Penn invents Chirot Lite?). As yet another possibility for asemic syntax, she uses linear structures very similar to her earlier (and very successful) work with grids. Her overlaying of hand-written asemics on (apparently) randomly typed letters generally works, more effectively in some areas than others, I think. Here are pages six and seven: 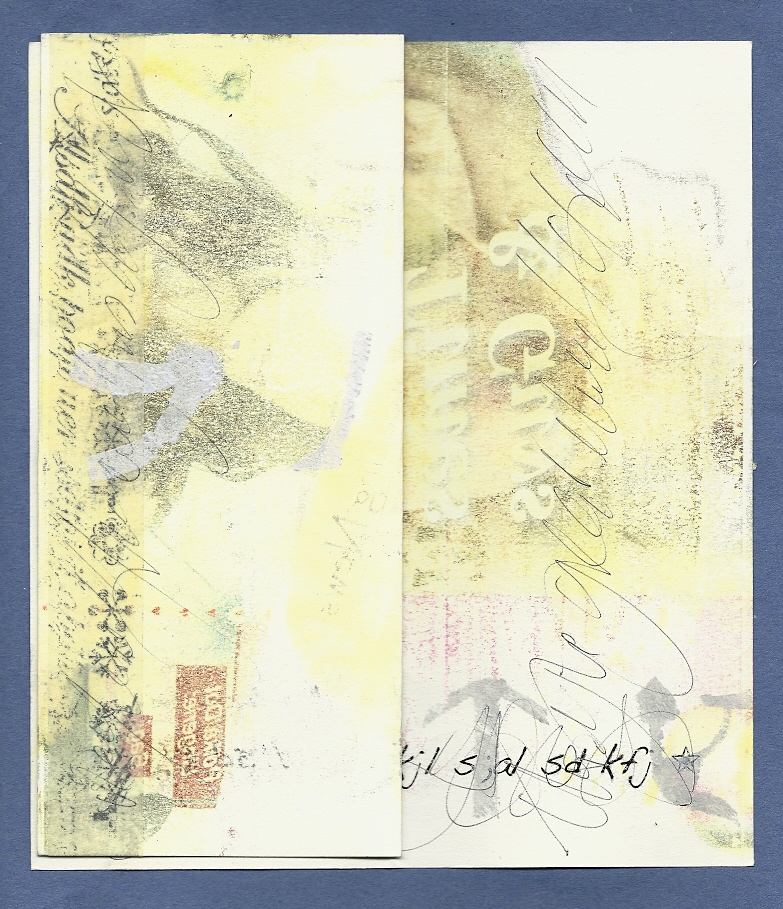 The incredible textural achievements of this chapter are very clear on these pages. Even the grain of the paper seems to be asemic, which brings me back to Cheryl Penn's stated intention: "The seeping fade to Post Literacy." This suggests that her Chapter 5 is a eulogy to the Age of the Printed Word and an assumed decline of literacy. Certainly the possibility of this decline provokes nostalgia and regret in many. It does not, however, in any way suggest The End of Language.

For me, the conceptual roots of this chapter are derived from postmodernism, which might fairly be described as a decades-long dirge about the death of literature and the limits of language. Penn's chapter immediately made me think of John Barth's seminal "Literature of Exhaustion" essay: All the inherited forms are worn out. I think of Samuel Beckett's insistent, "I can't go on; I must go on," as his own writing, over a lifetime, grew less and less, finally melding with silence. Cheryl Penn seems to raise pomo tropes in asemic writing. Here is the final page:

For me, this chapter works only partially as a eulogy to literacy. The idea of post-literature is different from post-literate. Post-literature refers to art, produced in a post-literate era, that in various ways does not abandon but instead draws upon literary and related artistic traditions. Cheryl Penn's fifth chapter contribution to the Asemics 16 project, I think, achieves the status of post-literature. The pretense of nihilism and despair is relegated to a secondary concern by the beauty and achievement of the work that is a synthesis of both the old and new. This provides wonderful closure to her five contributions to this phase of the Asemics 16 Project.

Compare to DK's Chapter 1. I see some similarities. The legendary "baked asemics": Comment by DKULT on October 10, 2011 at 3:49pm
It feels like a journey into Cheryl's subconscious/fragments of dreams and it's a nice place to be

DK! I didn't see your comment at first. I thought of you when I first saw Cheryl's chapter. I mentioned David Chirot Lite, but it could also be DK Lite - because you are the only other artist I can think of who tried to create these incredible background textures in the Asemics 16 books

Of course, you managed to create the trademark DK Baked Asemics Recipe. I doubt anyone else actually had to cook their chapter in an oven. I'll never forget that one. So I guess now it's you, David, and Cheryl who have pioneered these asemic textures. Thanks for commenting.

This was an opportunity to test the long-standing intention issue. However, my favorite bit is calling the piece "Chirot Lite," which you shouldn't take as criticism; it's due to the subtle tones. Thanks for your kind response.

Marie, you've already managed to call me "dense." I can only imagine what comes next.

stunning -thanks for posting this !

Comment by Marie Wintzer on October 10, 2011 at 2:29pm
This chapter is so complex, so different from anything else. Beautiful. I wouldn't have known where to start explaining it. Fantastic blog, so dense. I have to get back to it tomorrow and pre-digest it....