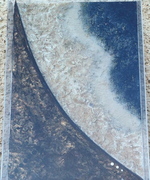 The award-winning artist Tinamaria Marongiu works and resides in her native Italy. She began her artistic career as a trained singer and musician, receiving early success with her LP “Contremano” distributed by Virgin Records in Germany. In 2005, her original song “Motherland” won critic’s choice at “The Italians in the World” competition held in Paris, and in 2007, her first full length CD “From Poetto the Malecon” was released under Interbeat Records and distributed throughout Europe by CNI. Her fine art is exhibited internationally in countries including Italy, France, Spain and the United States, with shows throughout Miami and New York City. Amsterdam Whitney Gallery is proud to showcase the art of this contemporary master.